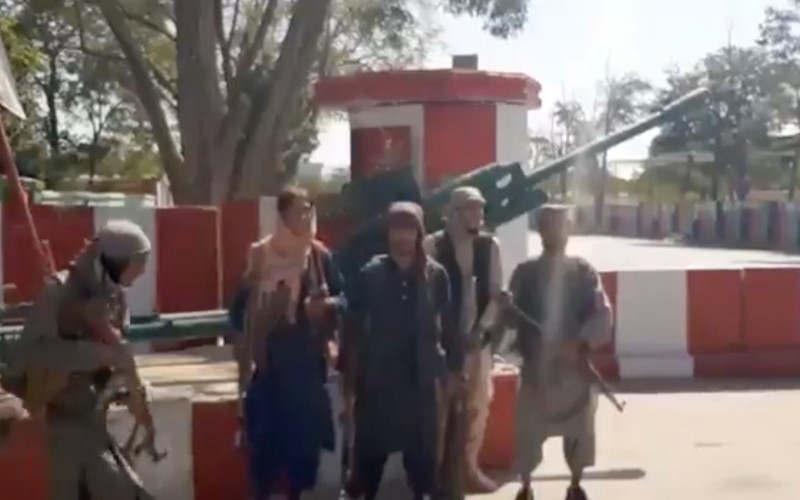 Taliban fighters gather on main road intersection in city of Ghazni, Afghanistan in this screen grab taken from a video released by the Taliban on August 12, 2021. Taliban Handout/via REUTERS

KABUL (Reuters) -Afghanistan’s third largest city, Herat, was on the verge of falling to the Taliban on Thursday amid heavy fighting, as the militant group also established a bridgehead within 150 km (95 miles) of Kabul.

The Taliban claimed control of Herat, near the border with Iran. And in what would be its most significant two victories since it began cutting a swathe through the country in May, the group also appeared close to capturing Kandahar, a diplomatic source said.

The spiralling violence and the militants’ swift advances https://graphics.reuters.com/AFGHANISTAN-CONFLICT/FLASHPOINTS/lbpgnrazjvq/index.html prompted the United States and Germany to urge its citizens to leave the country immediately, just under three weeks before the last of the U.S.-led international force are due to pull out.

Earlier on Thursday the Taliban, who now control about two-thirds of the country, captured Ghazni, situated on the Kandahar to Kabul road some 150 km from the capital.

The group on Thursday also ruled out sharing power with the government.

The speed and violence of its offensive have sparked recriminations among many Afghans over U.S. President Joe Biden’s decision to withdraw U.S. troops and leave the government to fight alone.

On Wednesday, a U.S. defence official cited U.S. intelligence as saying the Taliban could isolate Kabul in 30 days and possibly take it over within 90.

The gateways to the capital have been choked with people fleeing violence elsewhere in the country this week, a Western security source said.

Urging its citizens to leave the country, the U.S. Embassy said that given security conditions and reduced staffing, its “ability to assist U.S. citizens in Afghanistan is extremely limited even within Kabul,” according to a notice on its website.

Germany issued a similar warning to its citizens.

Al Jazeera reported a government source saying it had offered the Taliban a share in power, as long as the violence comes to a halt.

Afghan government spokespeople were not immediately available for comment and it was not clear to what extent the reported offer differed from terms already discussed at stalled talks in Qatar.

Taliban spokesperson Zabihullah Mujahid said he was unaware of any such offer but ruled out sharing power.

“We won’t accept any offer like this because we don’t want to be partner with the Kabul administration. We neither stay nor work for a single day with it,” he said.