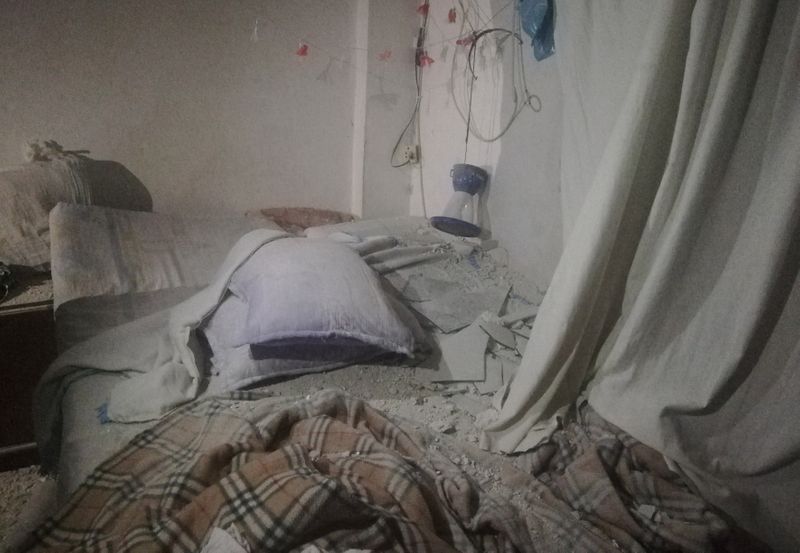 A view shows the damage inside a room after pre-dawn raids on the Mediterranean port region of Latakia, Syria, in this handout picture released on May 5, 2021. SANA/Handout via REUTERS

AMMAN (Reuters) -Syrian air defences downed several Israeli missiles during pre-dawn raids on the Mediterranean port city of Latakia, the Syrian army said on Wednesday, a rare attack on the ancestral home region of the Syrian leader and close to a Russian air base.

A Syrian army statement said aerial strikes soon after 2am hit several areas along the south west coast of Latakia. One civilian was killed and six injured in one of the strikes that the army said hit a civilian plastics factory.

“Our aerial defences intercepted the aggressors missiles and downed some of them,” the army communique said.

Although Israeli strikes in the last few years have targeted many parts of Syria, they have rarely hit Latakia which is close to Russia’s main air base of Hmeimim.

Assad comes from Qerdaha, a village in the Alawite Mountains 28 km (17 miles) southeast of Latakia, where his father, the late President Hafez al-Assad, is buried.

Israel has escalated in recent months a so-called “shadow war” against Iranian-linked targets inside Syria, according to Western intelligence sources, who say the strikes mainly target research centres for weapons development, munitions depots and military convoys moving missiles from Syria to Lebanon.

Syria has never acknowledged that Israel targets Iranian-linked assets with its attacks and says Iran only has military advisers in the country.

Israel has said its goal is to end Tehran’s military presence in Syria, which Western intelligence sources say has expanded in recent years.

Israel has stepped up its warnings against what it would deem a bad new nuclear deal between Iran and world powers, saying war with Tehran would be sure to follow.

Iran’s indirect talks with U.S. envoys in Vienna have been overshadowed by what appeared to be mutual sabotage attacks on Israeli and Iranian ships, as well as an explosion at Iran’s Natanz enrichment plant that Tehran blamed on Israel.