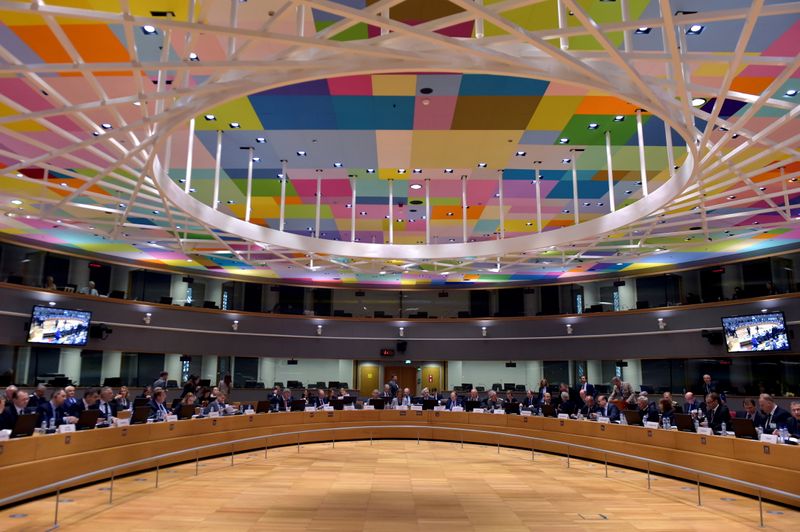 FILE PHOTO: Picture showing the room during a meeting of European Union defence ministers at the EU Council in Brussels, Belgium May 18, 2017. REUTERS/Eric Vidal/File Photo

BRUSSELS (Reuters) – The European Union will allow the United States, Norway and Canada to join a project to overcome delays in moving troops across Europe, diplomats said on Wednesday, which NATO sees as vital in the event of a conflict with Russia.

While NATO has spearheaded efforts to reduce conflicting regulations across 27 EU countries for transfers of U.S. troops, the EU has a budget to back the reconstruction of bridges too weak for tanks and has more power over changing bloc-wide rules.

The decision, to be formally taken by EU defence ministers on Thursday, means NATO members Norway, Canada and the United States also become the first foreign countries to collaborate in the EU’s Permanent Structured Cooperation (PESCO) pact, which aims to deepen defence ties.

The pact was agreed by EU leaders in December 2017 after Britain’s decision to leave the Union and Russia’s annexation of Crimea from Ukraine in 2014.

The bloc has since earmarked 1.7 billion euros ($2 billion) from its joint budget until 2028 to improve so-called military mobility in support of NATO, and the Dutch-led project brings together 25 EU states – all but Malta and Denmark. The NATO alliance has 30 allies, many of whom are also EU members.

Military mobility aims at improving the exchange of information between EU countries and cutting red tape at borders, including harmonising customs rules to allow for swift deployments and easier transport of military equipment, diplomats said.

While there have been no specific talks with Britain, which along with France used to be among the EU’s biggest military powers, more foreign countries can seek to join, they added.

“It is also very important for transatlantic cooperation, good cooperation between EU members and NATO allies,” said one of the diplomats, who spoke under condition of anonymity.

Plans for an EU defence pact gained momentum as the former U.S. president, Donald Trump, lambasted European NATO allies for not spending enough on their own security. That prompted the bloc to call for “strategic autonomy”.

U.S. and NATO security guarantees remain the cornerstone of national security for many EU countries, however, especially for those on the eastern flank of the bloc worried about Russia.

While the EU’s flagship defence pact aims to help the bloc fund, develop and deploy armed forces together, it would not amount to joint military force. ($1 = 0.8337 euros)