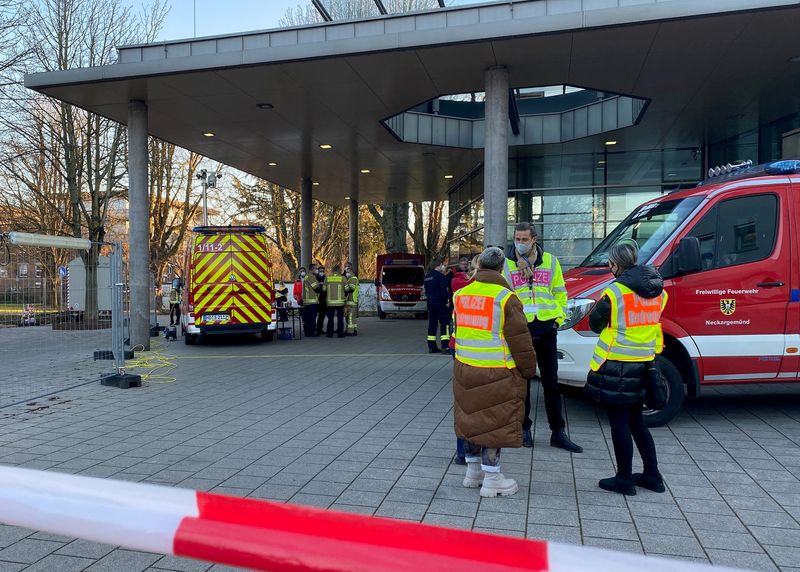 Police and firefighters secure the area at the premises of the Heidelberg university after a lone gunman wounded several in an attack in a lecture hall in the southwestern university town before shooting himself dead in Heidelberg, Germany, January 24, 2022. REUTERS/Tilman Blasshofer

By Paul Carrel and Zuzanna Szymanska

BERLIN (Reuters) -An 18-year-old biology student opened fire in a lecture hall at Heidelberg University in Germany on Monday, fatally wounding another student and injuring three others before shooting himself dead, officials said.

Mannheim police chief Siegfried Kollmar said the gunman had been found with 100 spare bullets in his backpack and it was not clear why he had stopped shooting, but officers were confident he had been acting alone.

Police have searched his home in Mannheim, in southwestern Germany, but it was too early to detect a motive, a state prosecutor told the same news conference.

The shooter had bought two guns, including a double-barrelled shotgun, abroad but did not have a licence, Kollmar said.

The prosecutor said the suspect had no previous criminal record in Germany.

One of the four German students wounded in the attack, which occurred around midday, was a 23-year-old woman who died of her injuries, the interior minister of the state of Baden-Wuerttemberg Thomas Strobl told the news conference.

The police chief said 29 witnesses in the lecture hall had told officers “only one person went in, shot and went out, and no one else was seen”.

A police spokesman told Reuters earlier on Monday the gunman fled the lecture hall before turning his gun on himself.