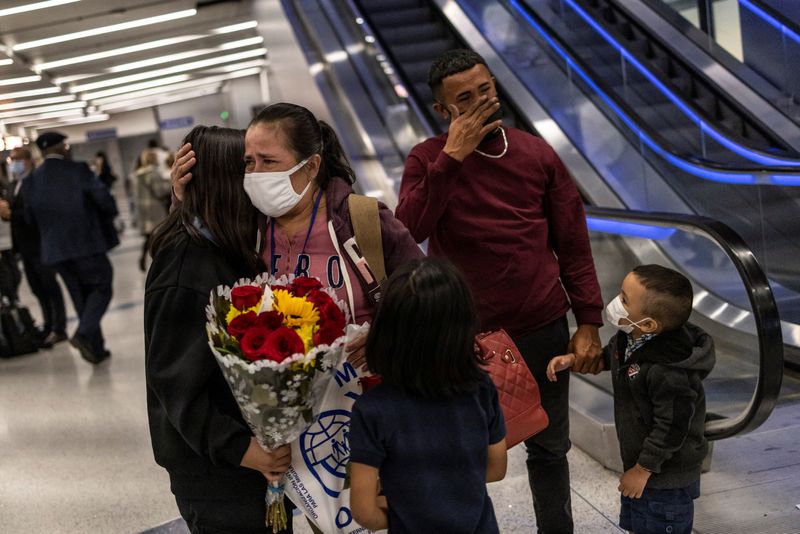 Maria Hernandez, 54, hugs her daughter Michelle, 12, (who is being referred to by her middle name to protect her privacy) while her son Maynor, 34 is overcome with emotion during their family reunification at Los Angeles International Airport in Los Angeles, California, U.S., January 11, 2022. Hernandez was separated from her two daughters and deported to Honduras after attempting to enter the United States in 2017, as former Republican President Donald Trump was rolling out his controversial ?zero tolerance? policy. “So many years without seeing them,” she said “They are so big now.” REUTERS/Carlos Barria

By Mica Rosenberg and Carlos Barria

LOS ANGELES (Reuters) – On a Tuesday in January, four years after American authorities pried Maria Hernandez away from her daughters and deported her back to Honduras, she returned to the United States – this time with the blessing of the U.S. government.

At the Los Angeles International Airport, Nicole, now 7, greeted her mother with a single red rose. Michelle, nearly a teenager, hung back with a bouquet of roses and sunflowers. When Hernandez turned towards her, Michelle rushed into her embrace, sobbing.

“I was far away but always thinking of you,” Hernandez whispered to her daughters.

Hernandez had last held Nicole when she was 3 years old; Michelle was 8. Days after Christmas in 2017, the mother had clung to her weeping girls at a border patrol station in Arizona before a U.S. official pulled them apart, Hernandez said.

The trio had crossed into the United States in search of asylum. Once apprehended, Hernandez said, she was given an impossible choice: Leave the country, either with the girls or without them. Rattled by recent threats to Michelle from Honduran gangs, Hernandez decided the girls would be safer in the United States, she said.

The sisters were sent to a children’s shelter in California and eventually released to live with their brother Maynor, now 34, who earns a living selling oranges in Los Angeles. Hernandez was deported, one of thousands of parents separated from their children under then-President Donald Trump’s controversial “zero tolerance” policy to deter illegal immigration. Reuters, which has followed the family since mid-2020, is referring to the girls by their middle names to protect their privacy.

Over the years, Hernandez tried to bridge the 2,800 mile (4,500 km) gap between them with near daily video calls https://www.reuters.com/world/americas/separated-her-daughters-us-honduran-mom-parents-her-smartphone-2021-06-28, studying their faces on a smartphone screen and listening to their stories. Nicole reported losing a tooth; Michelle confessed her crushes.

On her first night in the United States, Hernandez shared a bed with her daughters, gazing at them as they slept and marveling at how much they had grown.

“So many years without seeing them,” she said to Reuters this month, her voice shaky from crying. “They are so big now.”

The Trump administration contended that allowing families to be released together in the United States while they applied for asylum only encouraged illegal immigration. In response, the administration sought to prosecute and deport parents like Hernandez and place their children in U.S. custody as “unaccompanied minors.”

But traumatic family separations, which began in 2017 before any official announcement, were captured in the media worldwide and caused international outcry. Trump, a Republican, reversed course with an executive order ending the practice in June 2018.

Jeff Sessions, an attorney general under Trump and the force behind “zero tolerance,” defended the strategy in an interview with Reuters last March https://www.reuters.com/article/us-usa-immigration-families/former-trump-attorney-general-sessions-regrets-migrant-family-separations-idUSKBN2AV10R, saying a person crossing the border illegally with a child “shouldn’t be given immunity.” However, he expressed regret for the separations.

President Joe Biden, a Democrat who took office in January 2021, called family separations a “human tragedy” and quickly formed a task force to reunify families. Deported parents, once found, would be given the option to return to the United States to rejoin their children, who mostly had stayed with U.S. relatives or sponsors.

The task force identified more than 3,900 children separated at the U.S.-Mexico border after July 2017 under “zero tolerance” and related policies. More than half were reunified during the Trump administration as a result of litigation by migrant advocates. That left about 1,700 children still separated.

As of Jan. 25, the Biden task force had reunited 126 kids with their parents or legal guardians. About 377 more – from Guatemala, Honduras, El Salvador, Brazil, and Venezuela – have reunifications in progress, according to the U.S. Department of Homeland Security (DHS).

Setting up a process to bring back parents who were deported to countries across Latin America took months, in part because of the Trump administration’s incomplete and shoddy record-keeping https://www.reuters.com/world/us/us-reviewing-5600-migrant-child-cases-possible-separations-us-mexico-border-2021-04-07, the task force said. A spokeswoman for Trump did not respond to a request for comment.

To aid the task force, the Biden administration created the websites Together.gov and Juntos.gov, where families can register for reunification.

The administration is “dedicated to finding every family and ensuring families have long-term stability in the United States,” said Michelle Brane, the head of the task force in a statement.

Still, some families have been left frustrated, even distraught, at the slow pace of reunifications, according to migrant advocates.

“We are talking about people who haven’t seen their kids in three or four years,” said Hernandez’s lawyer Carol Anne Donohoe, who manages the Family Reunification Project at the non-profit immigrant advocacy group based at the U.S.-Mexico border Al Otro Lado.

“Why are you making them jump through these hoops?,” she said. “Any question you ask these parents is extremely traumatizing, because they are panicking and thinking ‘Oh no, I am not going to get back.’”

It fell to Honduran attorney Dora Melara to search for Hernandez.

Melara was enlisted in early 2020 by the New York-based advocacy organization Justice in Motion, as part of the lawsuit against the U.S. government brought by the American Civil Liberties Union.

Melara had only an incomplete name and location for Hernandez from a U.S. government list of parents and guardians who had been separated from their children at the border. She had no contact information for Hernandez’s daughters.

The Honduran lawyer took three trips over weeks to a gang-ridden town in northern Honduras near the city of San Pedro Sula. She traveled only during the day to be safe.

Thanks in part to tips from local taxi drivers, she found Hernandez in March 2020. By the time she showed up on Hernandez’s doorstep, manila folder in hand, the Honduran mother was so desperate to see her daughters that she was contemplating another attempt at crossing the border, this time with a migrant caravan. https://graphics.reuters.com/USA-IMMIGRATION-PROFILE/0100B2FK1NP/index.html

When Hernandez found out she could apply to rejoin her girls after Biden took office, she was overjoyed. But what followed was months of delay.

“I gave all the information I could, but then time just passed and I didn’t get any messages. I felt like I was never going to see my daughters again,” Hernandez said.

Complicating her case was her petition to travel with her now 4-year-old grandson, Aron, who was in her care and would need his own passport and other permissions to leave Honduras.

By October 2021, she had filed applications for “humanitarian parole” for herself and her grandson to enter the United States, her lawyers said. Approval came weeks later, in December. Then Aron came down with dengue fever, pushing back their travel date past Christmas.

Finally, in early January, Hernandez was told to pack her bags, take a COVID-19 test and head for the local airport with Aron.

After the two travelers landed in Los Angeles, the family made their way to Maynor’s one-bedroom apartment. The girls stayed out of school the next day to help their mom with the mundane tasks of building a new life in the United States: getting a cell phone, enrolling Aron in school, looking for a bigger place to live.

Under humanitarian parole in the United States, Hernandez is entitled to a work permit and is protected from deportation for three years, but she has no clear path to a permanent legal status.

The Biden administration recently pulled out of settlement talks with hundreds of families who had sued the government seeking compensation for costs and suffering allegedly caused by separations. Some Republican lawmakers raised an outcry over the potential for high payouts.

In 2019, however, a federal judge ruled that separated families are entitled to some mental health services at no cost.

A November 2021 study by the nonprofit Physicians for Human Rights found that parents and children forcibly separated at the border endured severe psychological trauma, including confusion and panic, depression, frequent crying and nightmares. Symptoms can linger even after reunification, the clinicians found.

For Michelle, it has been hard to talk to others about what she’s gone through.

“All the problems, I kept it to myself because it’s weird telling a teacher or a friend or somebody, because maybe they will not understand you or they will just feel bad about you,” she said after spending her first day with her mother.

Speaking in fluent English, Michelle said she tried to be strong for kid sister Nicole who became sad when she saw other schoolchildren with their mothers.

“The past is the past,” she added. “Now that my mom is here, I want to make new memories.”