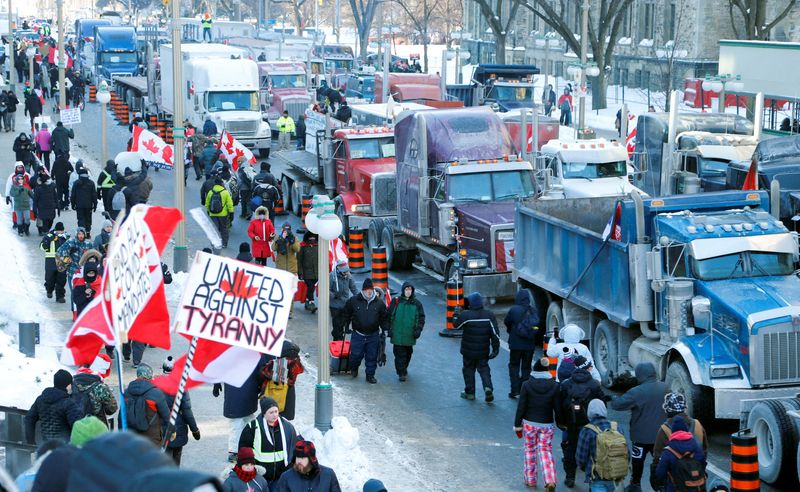 OTTAWA (Reuters) – Police and officials in the Canadian capital Ottawa say some of the trucks blocking the city center as part of an anti-vaccine demonstration should start leaving on Monday, even as some protesters insist they will stay.

Dozens of trucks and other vehicles have been jamming up central Ottawa since Friday and thousands descended upon Parliament Hill to complain about Prime Minister Justin Trudeau and COVID-19 vaccine mandates.

Parliament resumes on Monday after a six-week winter break and Trudeau is set to address reporters at 11.15 am Eastern Time (1615 GMT).

“Demonstrations are expected to become smaller after today. However, it will take some time to clear vehicles from the downtown core,” Ottawa city council said late on Sunday.

There were few signs of activity among the protesters early on Monday, with many huddling in their cabs as temperatures hovered around -16 Celsius (3 Fahrenheit).

“This is still a very tenuous exercise, it’s fluid in nature. Negotiations are indicating that some people are leaving the city from a demonstrations standpoint, that’s a good thing,” police chief Peter Sloly told reporters late on Sunday.

Canada Unity, one of the groups involved, said it wanted to gather 1,000 people to go into a mall and shop without masks. The Rideau Centre, a large nearby mall, said it would be shut for a second day on Monday.

Police said on Friday they would start towing trucks on Monday if necessary. But by late on Sunday it said they had avoided ticketing and towing vehicles to avoid provoking confrontations with demonstrators.

The announcement spurred frustration among local residents who said they were fed up with the non-stop blaring of truck horns and demonstrators using the streets as an open-air toilet.

Ottawa mayor Jim Watson said some protesters had harassed a soup kitchen, demanding free meals because they were unable to order food in restaurants due to their refusal to wear masks.

Staff at three Ottawa hospitals said they had had trouble getting to and from work.

The demonstration had started as a protest against a vaccine requirement for cross-border drivers https://www.reuters.com/world/americas/canadas-trudeau-slams-fear-mongering-over-covid-vaccine-mandate-truckers-2022-01-24, but then developed into a demonstration against the Trudeau government with a strong anti-vaccination streak. Some participants, though, have appeared at the protest brandishing Nazi and U.S. Confederate flags.