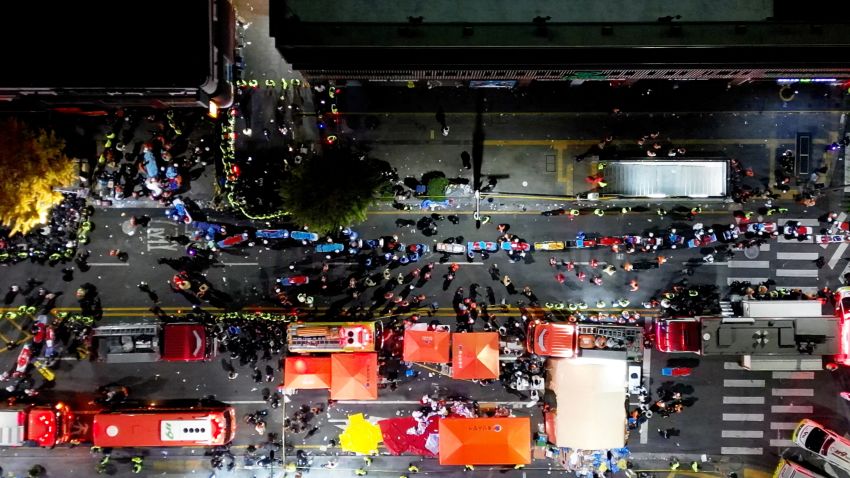 South Korean authorities are investigating the crowd surge that killed at least 154 partygoers in Seoul, as the rattled nation attempts to come to terms with one of its worst-ever disasters.

The country has begun a week-long period of mourning while officials attempt to understand how the devastating crush took place.

At least 26 foreign nationals, including two US citizens, are among the dead. More than a dozen embassies around the globe have confirmed victims from their country.

What caused Saturday’s surge is unclear, but witnesses say partygoers were packed tightly into narrow streets in the capital’s nightlife district of Itaewon, as people enjoyed the first Halloween weekend since Covid-19 restrictions were lifted.

Nearly all of the victims – at least 150 – have been identified; police told CNN. The toll included 56 men and 97 women, South Korea’s Interior and Safety Ministry reported.

South Korea’s Ministry of Education said Monday that six school students were among the dead, including one in middle school. Three teachers also died.

“There were rows and rows of people with tarps covering them in the street,” Emily Farmer, a 27-year-old English teacher in Seoul who was passing through Itaewon, told CNN.

Farmer and her friends were “overwhelmed” by the crowds on the street and decided to enter a bar. Shortly after, rumors started spreading that somebody had died and patrons were not allowed to leave. Farmer said she received an emergency message from the government alerting them to “a dangerous situation in the area,” and later was allowed to leave the bar, when she discovered the scale of the tragedy.

“It was horrible,” she said. “Not everyone died instantly.” Groups of people were crying, she added. Many victims were receiving CPR and had their costumes taken off to allow medics at the scene to resuscitate them. “They were still pulling people (out) because it was so crowded,” she added.

Another eyewitness, Sung Sehyun, told CNN that the street space was like a “jammed subway” on Saturday evening, with Halloween partygoers packed so tightly that it was difficult to move around.

Nationals from dozens of countries were among the dead.

Suah Cho added that people had started to push and shove, and there was a lot of screaming. She eventually managed to take a detour and fled to safety but had seen people climbing buildings to survive. She added that the costumes people were wearing added to the confusion; “there was also a police officer screaming but we couldn’t really tell (if it) was a real police officer because so many people were wearing costumes.”

Witnesses told CNN there was very little – if any – crowd control before the mass of people turned deadly.

Videos and photos posted to social media show people crammed together, standing shoulder to shoulder in the narrow street.

Flowers have been laid at the scene of the disaster.

Crowds are not unusual for that area, or for Seoul residents, who are used to jam-packed subways and streets in a city of almost 10 million.

After the first emergency calls came in around 10:24 p.m., authorities rushed to the scene – but the sheer volume of people made it difficult to reach those who needed help. Video posted to social media showed people performing compressions on other partygoers lying on the ground as they waited for medical assistance.

A number of countries, including the US, China, Iran, Thailand, Sri Lanka, Japan, Australia, Norway and France, have confirmed that their nationals were among the victims.

A University of Kentucky nursing student is among the dead, according to a statement from university president Eli Capilouto. Anne Gieske, a junior from Northern Kentucky, was studying abroad in Seoul this semester, Capilouto said.

The South Korean government has set a national mourning period starting until the end of November 5, Prime Minister Han Duck-soo said in a briefing.

During the mourning period, all public institutions and diplomatic offices will fly flags at half staff, Han said, adding that all non-urgent events will be postponed.

Civil servants and employees of public institutions will wear ribbons to express their condolences during the mourning period, Han said.