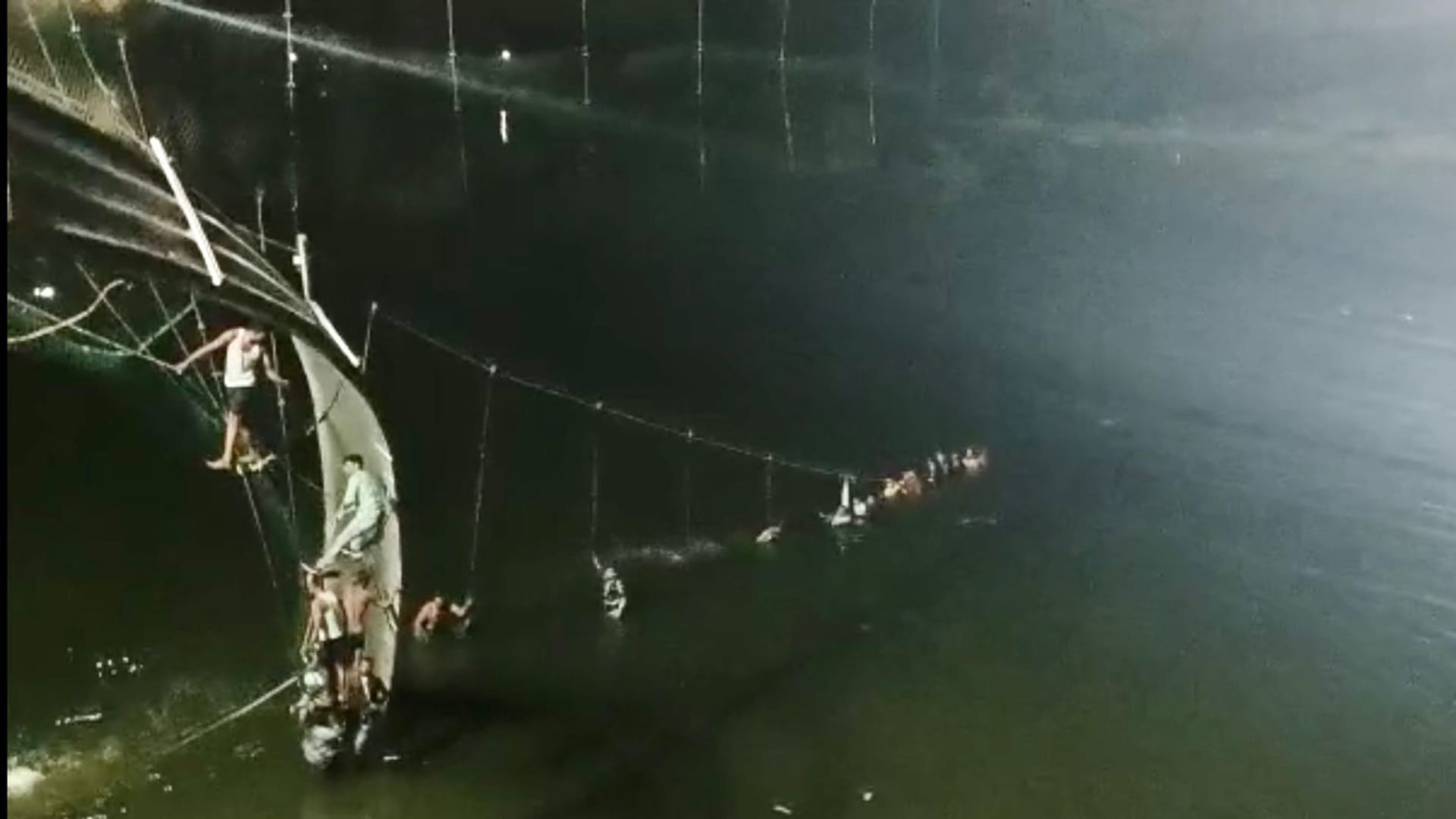 Share
Tweet
Share
Share
Email
Comments
New Delhi — The death toll has risen to 134 after a suspension bridge collapsed in India’s western state of Gujarat on Sunday, as authorities revealed the structure had only recently reopened following repairs.

Gujarat Home Minister Harsh Sanghavi said Monday some 200 people are estimated to have been on the bridge in the town of Morbi when it collapsed into the river below on Sunday evening. A cable at one end appears to have snapped, he added.

A total of 170 people have been rescued so far, according to Vishal Kanjaria, an administrative official for Morbi district. Some remain in hospital and others have returned home, though an exact breakdown is not yet known.

The state of Gujarat has lodged a criminal complaint against the agency that was handling the maintenance of the 230-meter long bridge, which was built in the 19th century and reopened last week after renovations, he said.

Photos from the scene Monday showed people gathering on the bank of the river Machchhu beside the mangled metal walkway, which hung at a sharp angle into the water, where rescue workers in inflatable dinghies searched for survivors.

A five-person special investigation committee has been established to investigate the incident, Sanghavi said, amid an ongoing search and rescue operation by hundreds of personnel from state and national disaster relief teams and the Indian military.

Indian rescue personnel conduct search operations after a bridge across the river Machchhu collapsed in Morbi, some 220 kms from Ahmedabad, early on October 31, 2022.

Speaking at a news conference in the early hours of Monday, Sanghavi did not say how many people are missing, but social media video showed dozens in the water following the collapse of the bridge.

TV footage showed people holding the cables and remains of the bridge as emergency teams tried to reach them, Reuters reported. Some climbed up the wrecked structure to reach the river banks, while others swam to safety.

Speaking later on Monday, senior police official Ashok Yadav said seven of the injured are still in hospital, while 56 people have been discharged after receiving treatment.

The families of the victims will receive compensation from the Prime Minister’s National Relief Fund, according to Indian Prime Minister Narendra Modi.

Speaking Monday at a campaign event ahead of a state-level election in Gujarat, Modi said his “heart is filled with love and is with the families of those suffering.”

“The state government has set up a committee to investigate the incident. I assure the people of the country that there will be nothing lacking in the relief and rescue efforts,” Modi said.

People gather as rescuers search for survivors after a suspension bridge collapsed in Morbi in the western state of Gujarat, India, October 31, 2022.

Gujarat Chief Minister Bhupendra Patel said the state government would provide the equivalent of about $5,000 in compensation per family of the deceased and about $600 each for the injured.

“I express my condolences to the families of the citizens who lost their lives in the tragedy,” he tweeted.