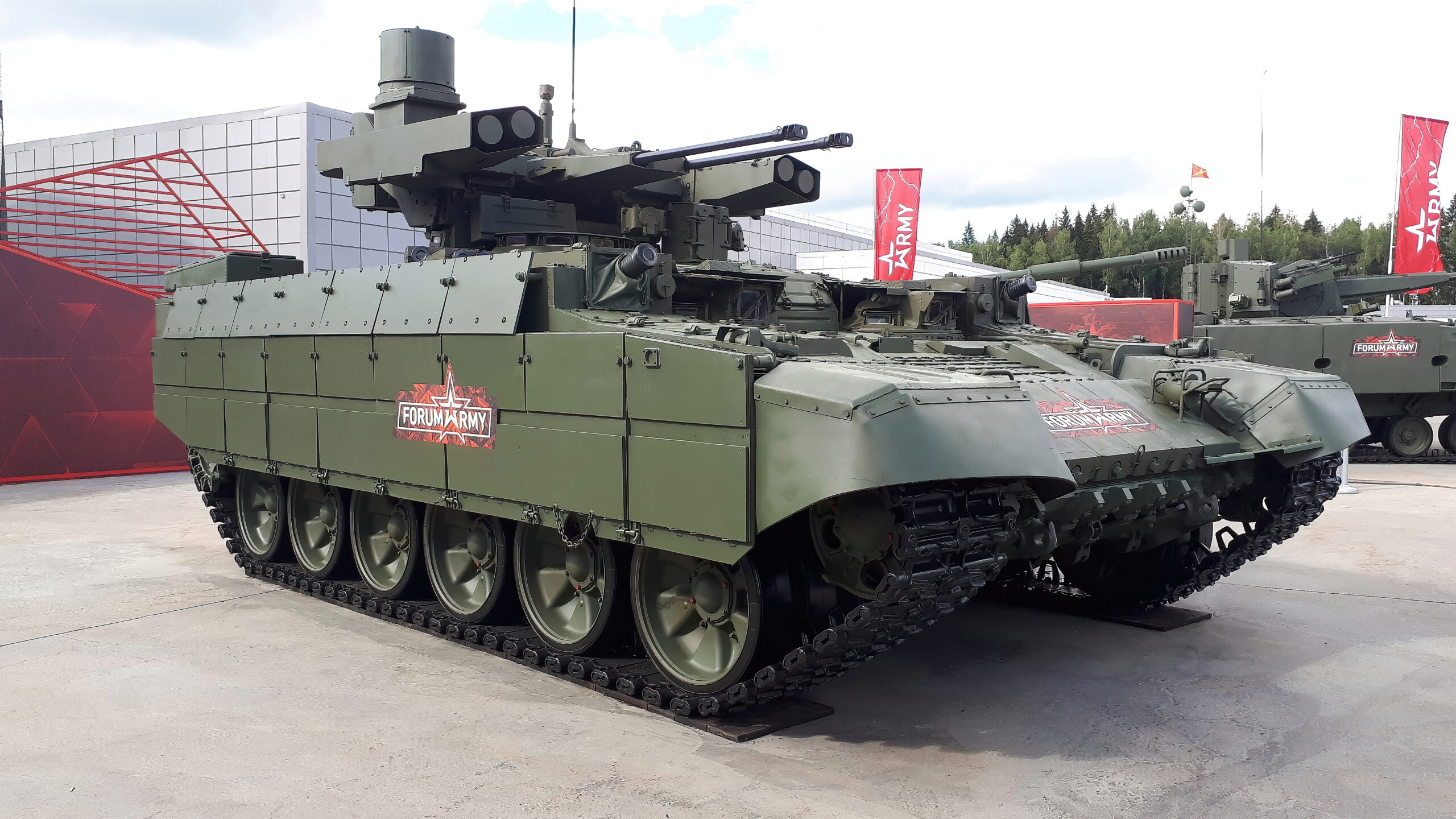 With the ground combat between Russia and Ukraine intensifying, the Russian troops have claimed that their BMPT-72 Terminator displayed an exhilarating combat performance against Ukraine.

Russia’s Tank Support Vehicle, or BMPT, is a powerfully loaded armored vehicle with more protection and mobility than the Main Battle Tank (MBT). The vehicle has primarily been designed to deliver suppressive fire against hostile infantry in support of MBTs.

The BMPT has been spotted with a convoy of tanks on several occasions in the ongoing conflict.

In the latest development, a crew commander of the BMPT vehicle belonging to the 3rd Army Corps of the Russian Western Military District said that the Ukrainian military was suspicious of Russian tank support combat vehicles (BMPT) called “Terminators.”

In a statement to the Russian news agency RIA Novosti, the Crew Commander said: “During recent fighting, the enemy’s dugout was practically trampled on, and the enemy fled at the sight of the Terminator. For them, this is an unfamiliar machine and incomprehensible.”

Unlike the main battle tank (MBT), a tank support fighting vehicle is intended to support armored operations rather than to engage in them. The Terminator is based on a T-72 chassis.

It is powerfully armed to defend the MBTs from ambushes by enemy infantry, Anti-Tank Guided Missiles (ATGMs), or grenade launchers in open terrain or urban centers.

Assisted by the BMPTs, tank units with accompanying infantry can operate more successfully in an urban setting where the fire could come from an unexpected direction. As demonstrated in Ukraine, the West-supplied anti-tank missiles hit the tank from the top, where it is most vulnerable.

According to recent estimates provided by Ukraine’s Defense Ministry, Russia has so far lost about 2,942 tanks in combat against Ukraine. In fact, on December 12, a Russian T-72 tank was reportedly obliterated in a tank duel with the Ukrainian T-64 in the Luhansk region.

With ground combat between the two sides advancing and a mammoth tank loss suffered, the BMPT is extensively supplementing Russian operations. According to the grenade launcher operator of the vehicle’s crew, it is a “high-quality and very reliable weapon complex, and it shoots perfectly.”

The driver highlighted the vehicle’s high degree of simplicity of operation and cross-country capability. According to the soldier, it is some “sort of dragon.” One of the crew members reported that “infantry fire” and a grenade launcher strike were no match for their vehicle.

This aligns with previous reports indicating that the Russian “Terminators” showed high combat stability. A source told RIA Novosti earlier that it was possible due to a multi-channel weapon system and enhanced protection.

“The vehicles demonstrated high combat stability, which corresponds to their specified technical characteristics and the concept of combat use,” the source said.

How Are The BMPTs Protecting Russian Tanks?

The unique BMPT Terminator armored fighting vehicle of the Russian Army was put into service in 2018. In 2006, UVZ created the Terminator-2 BMPT, and the Russian Ministry of Defense signed a contract for its supply during the Army-2017 forum.

Instead of being built from scratch, the BMPT was designed to be created by converting T-72s already in existence. This was a viable possibility since there were plenty of T-72s in use and storage facilities across the nation.

The Terminator turret could be attached to an existing tank hull effectively. The vehicle uses a modified T-72 hull with the same six-wheeled chassis.

Explosive Reactive Armor (ERA) from the Relikt family is installed on the side skirts of the BMPT, and slat armor is used to defend the vehicle’s rear and engine exhaust. ERA blocks also shield the hull’s front glacis.

The BMPT’s armaments have also been chosen to match urban combat settings, focusing on short-range, suppressive firepower against targets that may be difficult to reach. For example, the gun mounts of the BMPT-72 may be raised to high angles to shoot targets high up in buildings.

With all this firepower, the vehicle is designed to provide complementary fire support to existing main battle tanks. Thus, it acts as a force multiplier, besides protecting the MBTs in combat.

Some unnamed sources informed RIA Novosti that battle experience has shown that the BMPT’s view is significantly superior to most tanks, improving the crew’s situational awareness. These battleships also have faster weapon targeting speeds.

The Russian Army had a specific need for a heavy infantry fighting vehicle ideal for urban counterinsurgency combat, such as what Moscow’s forces encountered in the two Chechen conflicts in the middle of the 1990s and early 2000s. Hence, the BMPT was created.

However, with fighting between Russian and Ukrainian soldiers being conducted chiefly in cities and urban settings, the BMPT-72 provides much-needed support to Russian MBTs. This has proved especially beneficial given the proliferation of ATGMs with Ukraine’s troops.