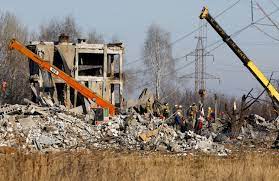 The Russian Defense Ministry said 89 servicemen were killed in the strike in eastern Ukraine that occurred on New Year’s Day. Among them was the regiment’s deputy commander, Lt. Col. Bachurin, the ministry said in a statement.

The apparent Ukrainian strike took place just after midnight on Sunday at a vocational school housing Russian conscripts in Makiivka in the Donetsk region, according to both Ukrainian and pro-Russian accounts.

On Monday, in a rare admission, the Russian Ministry of Defense said 63 servicemen had been killed in Makiivka when Ukraine used HIMARS rockets to attack a building where Russian soldiers were quartering. The Russian Defense Ministry updated the death toll after more bodies were found under the rubble.

The Ukrainian military had claimed up to around 400 Russian soldiers were killed and a further 300 wounded, and then said the exact number was “being clarified.”

In any case, it would represent one of the deadliest single losses of the war for Moscow’s forces.