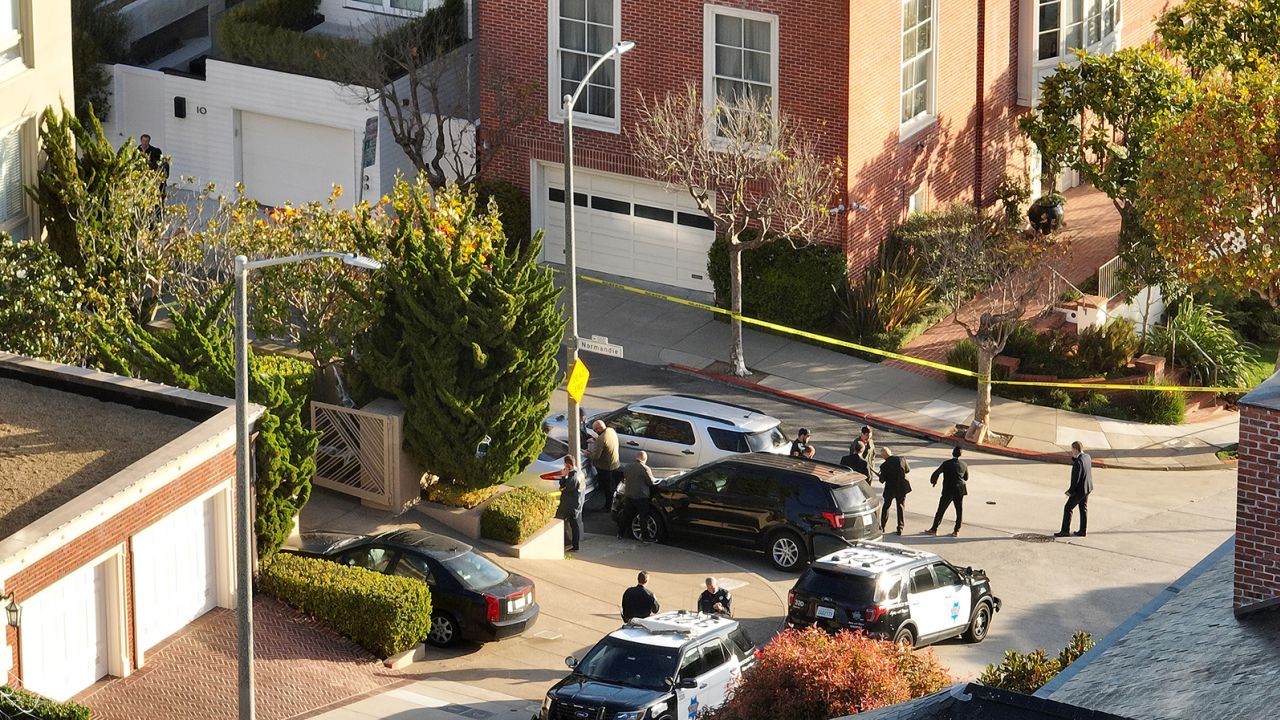 Police have yet to ascribe a motive to the attack on Paul Pelosi, 82, after a man broke into the couple’s home in San Francisco. They have said the alleged assailant was intentional about going to the house, and he shouted out, “Where is Nancy?” CNN has reported.

Republicans, while condemning the violence, are denying they have any culpability in fostering a poisoned political environment. Some even used it to pivot to new attempts to sow doubt on the integrity of US elections.

In another sign of an ugly time, Pelosi’s misfortune is already the subject of outrageous conspiracies – amplified for a time by the new owner of Twitter, Elon Musk, in a possible sign of how the social network could develop under his leadership. Ex-President Donald Trump’s son, Don Jr., also pushed false claims about the attack that were in deeply poor taste.

Reports confirmed by CNN that the suspect posted memes and conspiracy theories on Facebook about Covid-19 vaccines, the 2020 election and the January 6, 2021, insurrection renewed the debate about how much responsibility political leaders have to temper inflammatory rhetoric in order to avoid triggering violence.

The suspect in the case has not been arraigned, but Democrats, including President Joe Biden, are warning that the attack on the Pelosi is just the latest inevitable consequence of a GOP overtaken by its extreme fringe.

“What makes us think that one party can talk about ‘stolen elections,’ ‘Covid being a hoax,’ ‘this is all a bunch of lies,’ and it not affect people who may not be so well balanced?” Biden said on Friday.

“What makes us think that it’s not going to corrode the political climate?”

This was a question even before the Paul Pelosi attack given that many Republican candidates have tried to energize their base by putting Trump’s false claims about a stolen election in 2020 at the center of their midterm election campaigns.

At the same time, top Republicans on Sunday dodged on whether their side especially had fostered a dangerous political climate after embracing election falsehoods and blamed both sides equally for political turmoil.

The gulf between the two parties in the aftermath of the attack underscored the nation’s internal political estrangement ahead of next week’s election. It suggested Republicans are unwilling to get crosswise with their voters by being more critical of the extremism pulsating through the GOP base. And political shockwaves of the incident also showed how Democrats are keen to link rising threats against lawmakers and their families with Trump’s political movement as raging inflation threatens to deal them a heavy defeat at the ballot box.

Yet the aftermath of the assault represents more than just another fault line between Republicans and Democrats and points to something more than rote arguments of equivalence between rival politicians.

It took place in a time scarred by the January 6 insurrection, which established that in a festering political atmosphere cultivated and incited by Trump, individuals can be inspired to carry out acts of violence. The overwhelming majority of the ex-President’s supporters have not acted on his false claims of a stolen election. But while leading Republicans are right to argue the political attacks have targeted prominent figures on both sides, only one party features members who are excusing, downplaying, or denying the violence of January 6 and amplifying false claims of a stolen election that have been proven to incite violence.

It was a sign of a worsening political environment that Musk gave credence to a fringe conspiracy theory about the Paul Pelosi attack. He tweeted and then deleted a link to an article on a website that purports to be a news outlet, CNN’s Oliver Darcy and Donie O’Sullivan reported. The conspiracy theory was later amplified on Twitter by Trump Jr.

And in another troubling development this weekend that wasn’t linked to the Pelosi case but underscored worrying extremism coming to the surface of American politics, a series of antisemitic messages appeared in public spaces – including a football stadium, a highway overpass and a downtown building in Jacksonville, Florida.

Top Republicans on Sunday condemned the Pelosi attack as a despicable crime, but they tended to see it in isolation from current political tensions, even though the GOP has long demonized the speaker in hard-hitting ad campaigns. Instead, Republicans suggested it’s symptomatic of the rising violent crime they pin on Democrats.

“It’s disgusting. This violence is horrible,” Florida Sen. Rick Scott, who runs the Senate GOP’s campaign arm, said on CNN’s “State of the Union,” adding that his heart went out to Paul Pelosi and wished him a full recovery. But Scott quickly pivoted to highlight a Republican canvasser whom his fellow Florida Sen. Marco Rubio has said was attacked in Miami for political reasons. (After the incident, Rubio accused the media of not caring about violence when it targets Republicans).

Scott also tried to move on in the interview to tacitly raise fresh suspicions about the US electoral system in coded language. Asked by CNN’s Dana Bash whether Republicans should do more to condemn dangerous rhetoric and conspiracy theories, Scott replied: “We have to do everything we can to … make sure people feel comfortable about these elections. We have got to do everything we can to get people comfortable that this election in nine days is going to be free and fair, that people’s votes are all going to be counted fairly.”

The reason why millions of Americans have lost confidence in elections – despite repeated court rulings rejecting Trump’s fraud claims and his own Justice Department’s statement that 2020 lacked major irregularities – is that the ex-President and many GOP allies are still falsely saying the election was stolen.

Ronna McDaniel, the chair of the Republican National Committee, rejected the idea that the attack on Paul Pelosi was an inevitable consequence of rising Republican rhetorical attacks on Democratic politicians.

“We don’t like this at all across the board. We don’t want to see attacks on any politician from any political background,” McDaniel said on “Fox News Sunday.”

She also claimed that Biden had not condemned a suspect arrested near Brett Kavanaugh’s home who has been charged with attempting to murder the conservative Supreme Court justice. (After the arrest, White House press secretary Karine Jean-Pierre told reporters Biden believed any threats, violence or attempt to intimidate judges had no place in US society.)

House Minority Leader Kevin McCarthy has yet to deliver a full-throated public condemnation of the assault on Paul Pelosi on camera or on his official social media accounts or to release a detailed statement. The California Republican did tell Fox on Sunday he had texted with the speaker to express concern and his hopes for her husband’s full recovery.

“Let me be perfectly clear, violence or threat of violence has no place in our society. What happened to Paul Pelosi is wrong,” he told Fox.

The lack of a more public reaction by McCarthy is notable since he could be speaker himself, if Republicans win the House next week, and would have the responsibility of fulfilling the institutional duties of a role that is sometimes supposed to supersede partisan politics. This will lead to questions of whether he is catering to his fervently pro-Trump conference.

His comments also appear less direct than Speaker Pelosi’s reaction to the shooting of GOP Whip Steve Scalise at a congressional baseball practice in 2017, which she described as a “despicable and cowardly attack” on Congress itself and said at such times there were “no Democrats or Republicans.” After Vermont Sen. Bernie Sanders was informed that the deceased suspect in the shooting volunteered on his Democratic presidential campaign, he took to the Senate floor to condemn political violence “in the strongest possible terms.”

The Pelosi attack is also highlighting concerns about the general tone of some Republican advertising, which sometimes features candidates wielding guns.

Minnesota Rep. Tom Emmer, the chair of the GOP’s House campaign arm, denied there was anything tonally off about a video he tweeted last week that showed him firing a rifle with the hashtag #FirePelosi.

Emmer said on CBS’ “Face the Nation” that the tweet was about “Exercising our Second Amendment rights, having fun.”

In 2021, a CNN KFile review of hundreds of posts and comments on Greene’s Facebook page showed she repeatedly indicated support for executing prominent Democratic politicians in 2018 and 2019, including Pelosi, before being elected to Congress.

Leading Democrats were quick to make a link between such extremist rhetoric and the rise of violence and intimidation that has seen threats rise against political candidates and even some groups show up to monitor drop boxes in states like Arizona in moves Democrats have criticized as attempts at voter intimidation.

Some of them reacted to reports that the alleged assailant in the Paul Pelosi incident had asked where his wife was, and immediately drew conclusions not yet supported by details released by police. Minnesota Rep. Ilhan Omar, for instance, tweeted that a “far right white nationalist tried to assassinate the Speaker of the House and almost killed her husband a year after violent insurrectionists tried to find her and kill her in the Capitol, and the Republican Party’s response is to either ignore it or belittle it.”

Biden was more temperate but also made the link to far-right wing rhetoric at a fundraising event in Pennsylvania on Friday, referring to the alleged assailants’ demands of “where is Nancy?”

“Every person of good conscience needs to clearly and unambiguously stand up against the violence in our politics regardless what your politics are,” Biden said.

Former President Barack Obama made a wider argument about how the coarsening of political dialogue risked new eruptions of violence – and squarely put the blame on Republicans.

“This habit of saying the worst about other people, demonizing people, that creates a dangerous climate,” the former President said at a campaign event in Wisconsin on Saturday.

“If elected officials don’t do more explicitly to reject this kind of over-the-top crazy rhetoric, if they keep on ignoring it or tacitly supporting it or in some cases encouraging it, if they’re telling supporters, ‘you’ve got to stand outside polling places armed with guns and dressed in tactical gear,’ that’s the kind of thing that ends up getting people hurt.”