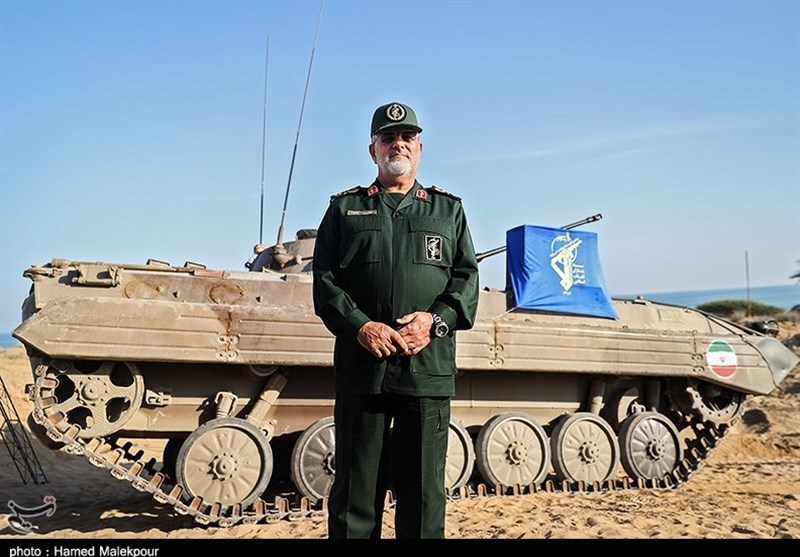 TEHRAN (Tasnim) – The commander of the Islamic Revolution Guards Corps Ground Force gave details of the most recent military operation conducted by his forces against the positions of terrorists in the Iraqi Kurdistan Region, saying at least 73 ballistic missiles hit the hostile targets.

In comments at the command and control center of a military operation against the KRG-based anti-Iranian terrorist groups, conducted on Wednesday, Brigadier General Mohammad Pakpour said 73 ground-to-ground ballistic missiles and tens of suicide drones have precisely hit the positions of terrorists inside the Iraqi Kurdistan Region and destroyed the targets completely.

He noted that the targets scattered in 42 locations, some of which were at least 400 kilometers apart, have been pounded in the latest round of attacks, saying the targets definitely belonged to the anti-Iranian terrorist groups.

Reiterating the need for the Kurdistan Regional Government officials to make a decision about the expulsion of terrorist groups from their region, General Pakpour emphasized that the IRGC operations will continue until the full disarmament of anti-revolutionary and separatists terrorist groups which have taken shelter in northern Iraq.

The IRGC Ground Force launched the fresh round of missile and drone attacks against terrorists in northern Iraq on Wednesday morning, after two similar strikes on September 24 and 26.

The new offense involved missiles with pinpoint accuracy as well as combat and suicide drones.

The attacks on the main bases of the Iraqi-based Komalah, Democrat and PAK (Kurdistan Freedom Party) terrorist groups took place after they intensified their activities to foment riots in Kurdish cities across the border in Iran and took advantage of protests in the country to incite chaos and carry out armed attacks.