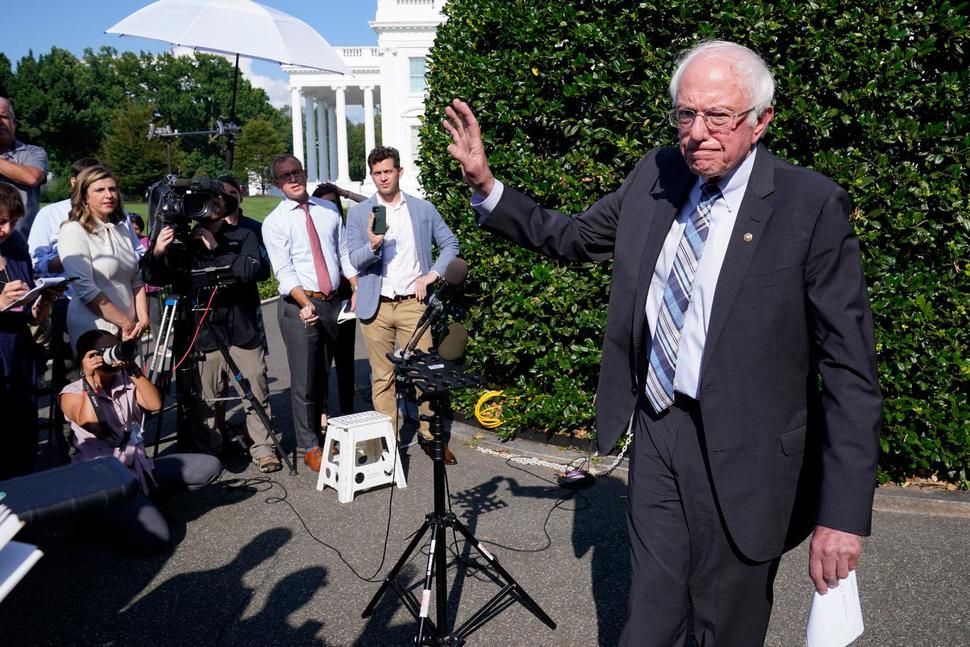 Joe Biden and Bernie Sanders have forged an unlikely yet understandable partnership.

Talkers both, Biden and Sanders stayed for an hour in the Oval Office, just two former rivals for the White House now acting as potential partners, negotiating a compromise both could live with.

The centrist president listened as the liberal senator spoke. Sanders passionately made his case that Biden’s big infrastructure investment should go even bigger — and include his own longtime goal of dental, hearing and vision benefits for older Americans on Medicare. The president gave his full backing, according to a senior White House aide and another person familiar with the private session, who spoke on condition of anonymity to describe a private meeting.

The deal was the product of mutual trust and common interest — notably to help the working class, but also to show that government can work and perhaps to restore some faith in democracy after the turbulent Trump era.

“We are making progress in moving forward with the most consequential piece of legislation passed for working people since the 1930s,” Sanders told The Associated Press a few days later, as Biden made his way to Capitol Hill to rally senators on the plan.

Theirs is an unlikely yet understandable partnership, a president who won over American voters with a calmly reassuring nod to traditional governing, and a democratic socialist senator who twice came close to winning the presidential nomination with what was once viewed as a wildly idealistic agenda. Sanders is now chair of the Senate Budget Committee.

Together, they are trying to unite the political factions of progressives and centrists in the sprawling Democratic Party, which controls Congress by only the narrowest of margins in the House and a 50-50 Senate, with no votes to spare around the president’s $3.5 trillion national rebuilding proposal.

In their sights is a legislative feat on par with Franklin Roosevelt’s New Deal or Lyndon Johnson’s Great Society. For two political leaders in the twilight of decadeslong careers, it is the chance of a lifetime and the stuff of legacies.

“We’re going to get this done,” Biden said Wednesday as he entered the private lunch room at the Capitol.

Biden encouraged the senators to think of the good they could do for people across America, investing in places like Scranton, Pennsylvania, where he was born, who feel that the party is not in touch with working people’s pain.

The president gave a nod to Sanders, who noted their past rivalry and yet spoke with similar urgency about the moment before them — how the future of democracy rests with how well they can connect with people who feel the government has forgotten them.

When it came time for Senate Majority Leader Chuck Schumer to call on senators who had raised their hands to speak, there were no pointed questions or objections, only enthusiasm, according to a person in the room who spoke on condition of anonymity to discuss the private meeting.

Senators emerged enthralled by the possibility of doing something big for the country.

The relationship between Biden and Sanders goes back years, the president having already spent decades in the Senate by the time the Vermont lawmaker was elected in 2006.

While Biden was the ultimate senator’s senator, Sanders has always been an outsider on Capitol Hill, a declared independent, rather than member of the Democratic Party, with his rumpled suits, gruff demeanor and unrelenting focus on liberal causes.

Ask Sanders any question, on almost any topic, and his answers are almost always the same — it’s time for the government to stop catering to the rich and powerful and instead focus on the working people of this country.

Once seen as outlandish, Sanders’ views have captivated millions of Americans who filled arenas to hear him speak, particularly after the Great Recession and amid a growing awareness of the nation’s gaping inequality. He almost won the party’s presidential nomination in 2016, but was defeated by Hillary Clinton, and again in 2020, before he lost to Biden.

In returning to the Senate, Sanders quickly became a focal point of Republicans opposed to Biden’s agenda. The president intends to finance his plan with tax hikes on corporations and Americans making more than $400,000 a year. Republicans see Sanders as an influencer, alongside Rep. Alexandria Ocasio-Cortez, D-N.Y., and other prominent progressives, pushing the president to liberal extremes.

“The president may have won the nomination, but Bernie Sanders won the argument,” Senate Republican leader Mitch McConnell said recently back home in Kentucky, on the same day he said he was ”100% focused” on stopping Biden’s agenda.

But in developing the investment package with the president, Sanders showed another side of his skill set: that of a pragmatic legislator.

Word circulated Monday that the two were huddled in the Oval Office, a key moment as Democrats were struggling to build consensus. Biden’s jobs and families plans total more than $4 trillion in traditional public works and human infrastructure investments. Sanders had presented a bolder $6 trillion proposal.

Sanders had been imploring his colleagues not to focus on price tags but rather on priorities — helping the middle class, fighting climate change, aiding older adults. He had also been insisting that the wealthy and large corporations pay their fair share in taxes. It is the same argument inside the rooms as it is in the arenas, senators say.

“The meeting was substantive, warm, and friendly — which also describes the nature of their relationship going back years,” said White House deputy press secretary Andrew Bates. The president values his skilled leadership, he said.

A bipartisan group of senators is compiling a slimmer $1 trillion package of roads and other public works spending.

But with Republicans opposed in lockstep to Biden’s broader proposal, Democrats are pressing ahead on the more robust package they could pass on their own, under special budget rules of 51 votes for passage rather than the 60 typically needed to overcome objections from a filibuster.

If Biden, Sanders and Schumer can keep all 50 Democratic senators united, Vice President Kamala Harris can cast a tiebreaking vote. Democratic Speaker Nancy Pelosi has a similarly slim margin in the House.

Democratic Sen. Jon Tester, a centrist Montana farmer, is not yet supporting the president’s broader plan, but said Sanders often advocates for things that are “common sense.”

While acknowledging that Sanders sometimes pushes the envelope further than he’s comfortable with, Tester said, “He’s trying to make it so the little guy’s got a shot, which is, you know, what Democrats are for — at least that’s what I’m for. I want to make sure the little guy has a shot.”