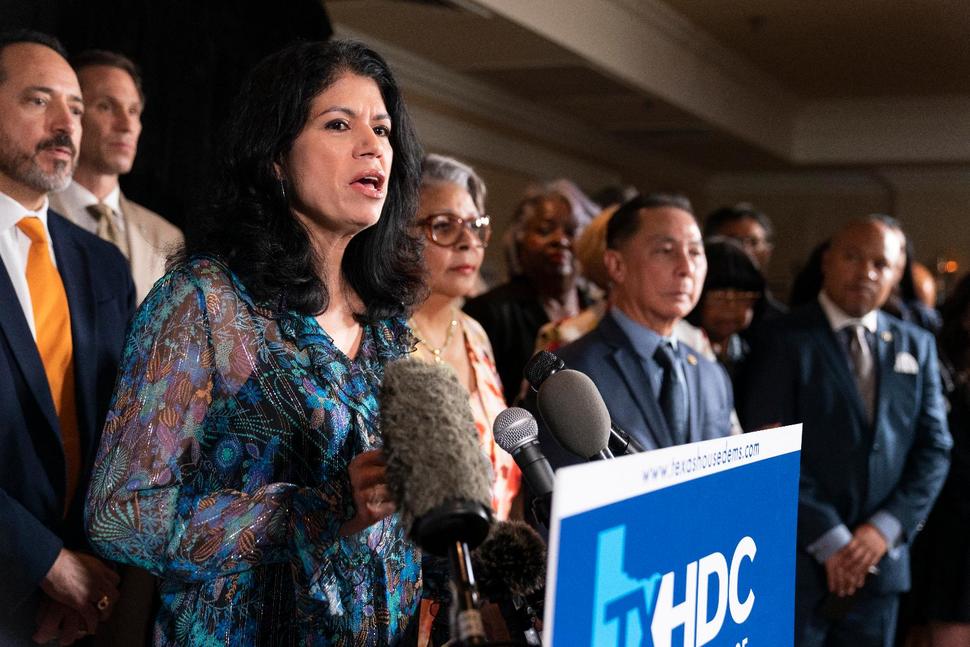 Sheltered in a downtown D.C. hotel, the Democratic lawmakers who left Texas to block a restrictive voting bill are living a life of stress and scrutiny.

After bolting the state Monday in order to sabotage the bill by denying a quorum in the Texas House of Representatives, the more than 50 state legislators find themselves balancing a punishing schedule of political lobbying, outside work and family obligations, all under a national spotlight.

Many have left young children behind; most have other professional obligations back in Texas. All seem to be operating on minimal sleep.

“It’s surreal,” said Rep. Gene Wu of Houston. “I can’t even describe to you how weird it has been.”

Wu said he realized just how big a story their exodus had become when they arrived via private plane at Dulles airport on Monday. He overheard a group of German tourists talking in the airport about the fugitive Texas legislators.

Their goal is to hold out until the end of their special legislative session on Aug. 7, but Republican Texas Gov. Greg Abbott can call another special session 30 days after that. Abbott has also threatened the legislators with arrest the moment they return to Texas.

In the meantime, they’re working the Capitol and the White House, seeking some sort of federal voter-protection move that would supersede any state-level laws.

The Texas State Legislature is a part-time body with an annual salary of $7,200. So the vast majority of the delegates have other primary jobs back in Texas that they abruptly left behind.

The lawmakers describe 16-hour days of essentially operating in shifts, with some working the Capitol and doing media interviews, while others carve out four hours or so to handle their other jobs.

“We have a number of attorneys. We’ve had several folks doing Zoom hearings,” said Rep. Erin Zweiner of Austin.

The Covid-19 pandemic weirdly turned out to be an unexpected training ground, she said, since everybody is already practiced in teleworking. “Without that cultural shift, a lot of people’s ability to earn a living would be severely hindered,” she said.

And not everyone has a job or a business they can handle via Zoom.

“We’ve got a lot of practice during the pandemic, said Rep. John Bucey of Austin. But several, he said, “are here at the total expense of their careers.”

Bucy came to Washington with his 17-month old daughter Bradley and his wife Molly, who is 27-weeks pregnant. The trio actually drove 23-hours straight rather than fly with the other representatives because Bradley is too young to wear a facemask on a plane.

Zweiner came to Washington with her three-year-old daughter Lark, for “both practical and sentimental reasons,” she said. Her husband’s work schedule didn’t allow him to solo-parent and Zweiner said the idea of being away from her daughter for weeks was heart-wrenching.

Now Lark is a low-key Twitter star: the toddler attended a group meeting with New York Democratic Sen. Kirsten Gillibrand; she watched the movie “Frozen” on an iPad sitting on a Gillibrand staffer’s lap and Gillibrand gave her a U.S. Capitol coloring book.

Zweiner said Lark has been “an absolute champ,” but acknowledged Thursday that “By day 4, she’s getting a little grumpy with the process … she needs some kid time.”

The balancing act is not just causing family sacrifices. Some Democrats are already paying a price back home in the Legislature, as Speaker Pro Tempore Joe Moody was stripped of his leadership position Thursday.

It is only one of the ways the Texas GOP is trying to turn up the heat just days into the showdown. Republican House Speaker Dade Phelan said he would have a plane ready in Washington this weekend to bring Democrats back home, while Abbott began running targeted campaign ads against absent lawmakers in likely competitive House districts in 2022, putting absent Democrats’ faces on milk cartons.

“There is no excuse for their PR stunt, and I join thousands of Texans in demanding that these Democrats get back to work,” Abbott said.

The non-stop meetings have been a mixed bag so far. On Thursday the Texas lawmakers huddled with Sen. Joe Manchin, a moderate West Virginia Democrat. Manchin’s vote is pivotal to pass the stalled voting-rights legislation through Congress, which would preempt much of the measure that Texas Republicans are advancing in their legislature.

But approving the bill, known as the For the People Act, also hinges on weakening a procedural rule called the filibuster, which requires 60 votes to advance most legislation in the Senate. Senate Republicans used the rule last month to block debate on the measure. And Manchin, whose vote would also be required, has rejected the idea.

Texas state Sen. Nathan Johnson, said after the meeting that Manchin, “described (the For the People Act) as aspirational.”

The Texas governor has accused the legislators of “hanging out on a taxpayer-paid junket” but the representatives defended their decision to leave the state, saying the move had already partially succeeded by shining a national spotlight on the issue.

“We are not here on vacation,” state Sen. Jose Menendez “I’d much rather be home with my family. We are here to do a job.”

Representatives say they’re currently too busy go out to dinner, take their kids to a museum or any of the other typical Washington-visitor activities.

“I think we will get to a normal routine and a more reasonable baseline,” Zweiner said, “something where it’s down to just 12-hour work days.”

The decision to hole up in Washington is aimed at ratcheting up pressure on President Joe Biden and Congress to act on voting at the federal level. The day after they arrived, Biden delivered a speech in Philadelphia calling Republican-led efforts to curtail voting accessibility “un-American” and “un-democratic.”

About 20 of the state legislators held a press conference Wednesday, joined by a handful of Democratic Texas state senators who had flown in to offer support. Outside the downtown D.C. hotel where the contingent is living and working, about a dozen demonstrators held signs with messages like “Do your job!” and “Who paid for the private jet?”

The accusation that they’re wasting public money particularly rankles. The delegation had maintained that the entire trip is being funded by donations through the state’s Democratic Caucus. They’re also in the midst of a public debate as to whether to decline their $221 per diems.

Some pointed out that their presence in D.C. was a personal financial disaster because of the jobs they left behind. Wu, an attorney with two young children, said he worried about making his next mortgage payment.

“Our mission here, in Washington, is to use this time in this legislative session between now and Aug. 7 to say to the U.S. Senate that we need to pass federal voting rights legislation. And we need it now, said Rep. Chris Turner of Arlington, the leader of the Texas House Democrats. “And we’re going to get into some good trouble, as best we can, while we’re doing it. “

AP reporters Brian Slodysko in Washington and Paul Weber in Austin contributed to this story.