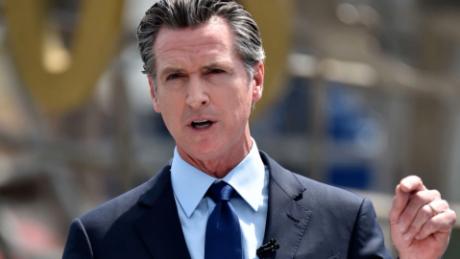 Share
Tweet
Share
Share
Email
Comments
“You saw the Big Lie, you saw what happened on January 6, you have seen the voter suppression laws all across the country and you saw what just happened in Texas,” he said, referring to a number of Republican-led efforts that have infuriated Democrats. “We said last year, we all said this… the most important election in your lifetime was last November, defeating Donald Trump. But know this, we did not defeat Trumpism.”
Then he turned to his own fight: “It is still alive all across this country and… it has come to the state of California.”

The Democratic governor may be fighting for his job as the top executive in the nation’s largest state, but his message in the waning days of the campaign has been national, warning Californians that what Republicans are doing in states like Florida and Texas could come to the Golden State if voters decide to oust him in favor of a Republican on September 14. And he’s cast his leading opponent, Republican Larry Elder, as someone who will bring Donald Trump’s Republican Party to the state that proudly stood against the former President during his four-year term.
Taking her cues from Newsom, Warren wasted little time on stage before making the same national argument, arguing “governors matter” because of recent controversial moves in the fight against the coronavirus by Ron DeSantis, Florida’s Republican governor, and on abortion by Greg Abbott, Texas’ Republican governor.
“If what happened in Texas or Florida or South Dakota makes you worry about the future of our nation… then Governor Larry Elder should absolutely terrify you,” she said, before dealing the biggest applause line: “Larry Elder dreams of being California’s own Donald Trump. And I don’t know about you, but I would fight with everything I’ve got to keep from putting one more Donald Trump Republican in office.”
For Newsom in this final phase of the race, it’s a turnout game rather than a campaign about persuasion. Democrats outnumber Republicans nearly 2-to-1 in a state that President Joe Biden won by nearly 30 points. But polls throughout the summer showed that Republican voters were much more fired up than Democratic voters about casting their ballots in the recall. Still, in order to overcome their math problem in the Golden State, Republicans would have to post a massive turnout while Democratic turnout remained relatively low. 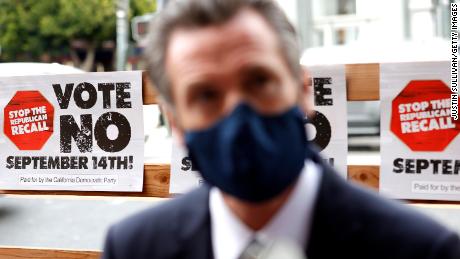 Early ballot returns suggest that Newsom has made some headway in convincing Democrats that there is a real risk to their agenda if they don’t participate. With more than 5 million ballots returned, Democrats were maintaining a strong advantage — overperforming their registration level in the state.
But their party’s voters are much more comfortable voting by mail, and Republicans could still turn out in large numbers as voting centers open this weekend and they have a chance to cast their ballots in person or on Election Day. So Newsom’s team is taking no chances, which is why they have brought Warren, Minnesota Sen. Amy Klobuchar and others into the state — and why they hope President Joe Biden will still make an appearance to keep Democratic turnout strong in the closing days. Vice President Kamala Harris is expected to campaign with Newsom on Wednesday.

The best way to boost turnout, according to top Democrats in the state, is to heavily lean into the national implications of the race. At nearly every event Newsom does — virtual or in person — the governor has argued that the recall is a chance for Democrats to push back against the conservative GOP agenda of the post-Trump era.
The recall election, the Democratic governor said Thursday, “is part of an extended narrative that started with a big lie, extended to the insurrection on January 6, extends to the voter suppression laws you’re seeing all across the country — and yes, to what you saw yesterday in Texas and the assaults on women’s rights and reproductive freedom in this nation.”
At nearly every public event since Texas’ six-week abortion ban went into effect on Wednesday, Newsom has alluded to the law and sounded the alarm about his chief opponent’s opposition to abortion to argue that this race has national implications.

“What more evidence do we need than the last 48 hours as we reconcile what just happened with the US Supreme Court and what is happening in Texas,” Newsom said Thursday evening in a get-out-the-vote event with Latino leaders after the Supreme Court formally denied a request from Texas abortion providers to freeze the state law.
Elder maintains that his own opposition to abortion would not lead to changes — reasoning that any moves he made in that direction would be thwarted by the Democrat-controlled legislature.
But Elder, too, is not shying away from the national implications of the contest. On Mark Levin’s radio show Friday, Elder said the reason national Democrats are interested in the race is because of the “50-50 split in the Senate in Washington, DC” and the possibility of having to replace Sen. Dianne Feinstein, the state’s 88-year-old senior Democratic senator.
“God forbid Gov. Elder should replace Dianne Feinstein,” Elder said. “They are afraid I am going to replace her with a Republican, which I most certainly would do. And that would be an earthquake in Washington, D.C.”
During a news conference with Newsom following the rally Saturday, Warren repeatedly deflected questions about Feinstein’s health and whether she believed it was a real possibility that Newsom would have to appoint someone to replace California’s senior senator in the next few years. Feinstein’s team has repeatedly said she has no plans to retire before her term is up.
Newsom has explicitly warned that his recall would help national Republicans and hurt Biden, who needs all the votes he can get to move his agenda through Congress, where Democrats narrowly control the House and hold a tie-breaking vote in the Senate because of Harris.
“Who would have Larry Elder appointed to replace Kamala Harris,” Newsom asked rhetorically on Thursday about his decision to nominate then Secretary of State Alex Padilla to the seat when Harris became vice president. “Would Chuck Schumer be majority leader or minority leader? What would that mean to the Biden agenda? Would there be a stimulus bill that has provided relief to restaurants like this?”
On Friday, Newsom made his pitch to LGBTQ voters squarely about stopping the kind of politics that elevated Trump: “We defeated Trump last year. We all worked hard to defeat Trump. We said it was the most important election in our lifetime, but we haven’t defeated Trumpism.”
The messaging is a smart use of California’s political tilt for Newsom, said Matt Barreto, a professor at UCLA and a top adviser to “Building Back Together,” the outside political group aligned with Biden.
“California is even more Democratic in national politics than it is in state politics. It is a smart move to remind people that there are national implications. Nobody knows what the tea leaves are but there could be another Senate appointment,” he said, nodding to a possible Feinstein replacement.

Some 22 million ballots have been mailed to the state’s registered voters, asking them to them first to answer a “yes” or “no” question on whether they want to recall Newsom, then to choose from a list of more than 40 candidates to replace him. Though a majority would have to vote to oust Newsom, if that first question were to succeed, it’s possible his replacement could win with a simple plurality.
That’s one reason why Newsom and his Democratic allies have been so eager to attack Elder, who has polled the highest among the main competitors.
Newsom has accused Elder of wanting to turn California’s Covid response into hotspots like Florida and Texas, where cases have sparked of late. 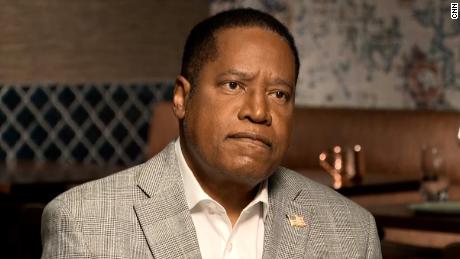 “This is a matter of life and death,” Newsom said. “It is not hyperbole to suggest that.”
And presenting himself as a champion for women’s reproductive rights, Newsom has especially been using Elder’s positions on social issues to convince Democratic voters that they must return their ballots, even if they are frustrated by the many crises that the state is facing, including the Covid-19 pandemic, wildfires, drought, homelessness, and a dearth of affordable housing.
Despite saying he’d appoint a Republican to a vacant Senate seat, Elder has been evasive about how he would use his executive powers he’d have as governor if he won.
“Before Roe v. Wade in California, abortion was pretty much available on demand, and in the event that Roe v. Wade is overturned, abortion will still be pretty much available on demand here in California,” Elder said during a Zoom press conference on Wednesday, the same day the Texas law took effect.
“I am pro-life and I don’t believe Roe v. Wade was decided properly, and in the unlikely event that Roe v. Wade is overturned, the matter goes back to the states and to the legislatures,” Elder said when asked about the Texas law. “We have two-thirds super majorities in the (California) Senate; two-thirds super majorities in the Assembly; and there is zero possibility that all of a sudden, those two-thirds are suddenly going to become pro-life.”
Earlier in the week when asked by CNN to respond to Democratic supposition that he might use the powers of the governor’s office — including executive orders or his purview over state agencies and the state budget — to restrict access to abortion if elected, Elder deflected by challenging the premise of the question: “What does Roe v. Wade have to do with my campaign?” he said repeatedly. “Why are you bringing this stuff up?”
Elder has used that strategy of deflection — accusing reporters of asking about issues that he says are not part of his agenda — to rebut questions about his past statements on an array of controversial issues that could alienate progressive and moderate voters in this blue state.
During an interview with CNN on Monday, when asked about his position that the minimum wage should be zero, he said he wouldn’t plan to do anything about it if elected as California’s governor: “That’s not even close to anything on my agenda list.”
But Newsom and his allies on the campaign trail aren’t buying into that.
“This is a profoundly consequential race, not just here in California, but all across the country,” Newsom said Thursday.