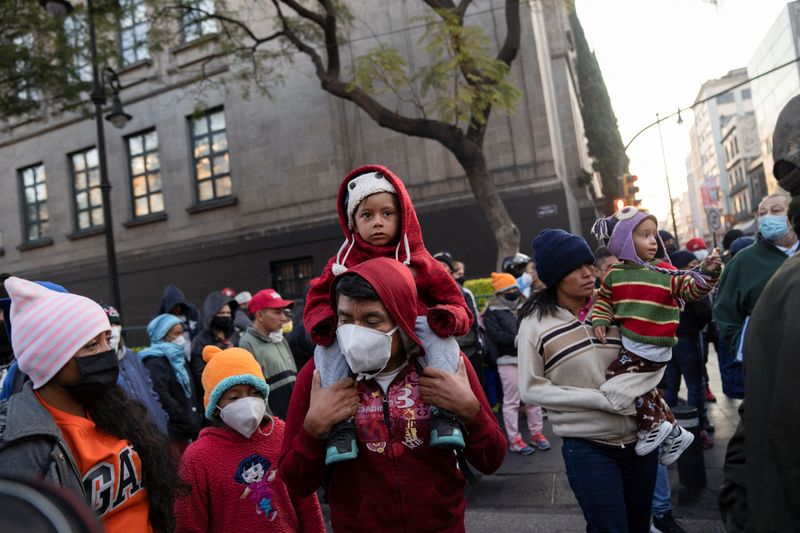 A man holds a child during a protest in favor of migration, under the slogan “Migration is not a crime,” in Mexico City, Mexico December 16, 2021. REUTERS/Toya Sarno Jordan

MEXICO CITY (Reuters) – Migrants traveling by caravan through Mexico in hopes of reaching the United States held a rally in Mexico City on Thursday, demanding that the Mexican government do more to help them.

Led by protesters carrying a banner reading, “To migrate is not a crime, the criminal is a government that represses migrants,” the migrants, some with very young children, marched through Mexico City to the government palace and demanded that President Andres Manuel Lopez Obrador’s government change its policies.

“(We demand) dialogue and solutions, to have legal certainty for every one of the migrants who left Tapachula on October 23 and on November 18,” caravan organizer Luis Villagran said, referring to the city near the Guatemalan border that is a waystation for many migrants.

“We want to have legal certainty for every one of them. For them to have residence, permanent residence in Mexico, that’s what we propose.”

Some migrants spoke of their desire to reach the United States.

“The idea is to reach the north. To go all the way up there because we’ll be better over there (in the United States),” said Josue Arias, a migrant from Cuba.

“Here (in Mexico) certain places are good, but I think it’s more dangerous with all the cartels. It makes me a little afraid. So the idea is to go north,” Arias said.

Another Cuban migrant, Lesbia Galana, said, “We came to ask the president for humane treatment for migrants, to allow us to reach the (U.S.) border. If he is able to provide buses to reach the border, that would be great and provide papers for those wishing to stay in Mexico, so that they are able to work and have access to medical and public services.”

The migrants later met with officials at the Interior Ministry.

A U.S. appeals court https://www.reuters.com/world/us/us-court-rejects-bid-end-trump-era-remain-mexico-border-policy-2021-12-14 this week rejected a renewed attempt by the administration of President Joe Biden to end a policy put in place by former President Donald Trump that forces migrants to wait in Mexico for the resolution of their U.S. asylum cases.