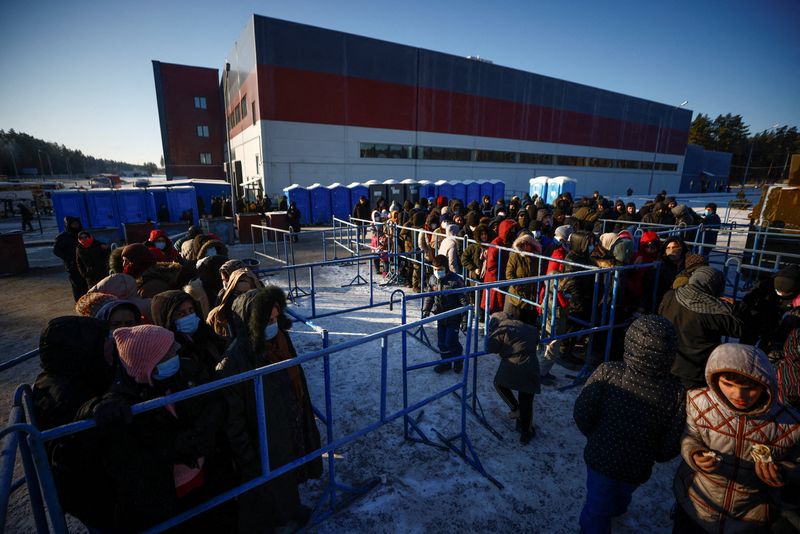 FILE PHOTO: Migrants queue to receive meals outside the transport and logistics centre Bruzgi on the Belarusian-Polish border, in the Grodno region, Belarus December 22, 2021. REUTERS/Maxim Shemetov

By Lev Sergeev and Maxim Shemetov

BRUZGI, Belarus (Reuters) – Sleeping on mattresses in a Belarusian warehouse, hundreds of Middle Eastern migrants are still clinging to the hope of a future in western Europe as the year draws to a close.

The nearly 600 migrants, from countries including Iraq, Turkey, Iran and Syria, are among thousands who flew to Belarus this year and tried to cross the forested border into Poland.

The European Union says Belarus encouraged them to come and then pushed them towards the border in a deliberate attempt to destabilise its eastern frontier. Belarus denies orchestrating the crisis and its veteran leader Alexander Lukashenko has said it is up to the migrants themselves to decide if they want to head west or return to their home countries.

Staff and volunteers of the International Organization for Migration (IOM) are working to register people willing to go back. But some are reluctant to do so, having spent thousands of dollars to get this far.

Many small children are among the hundreds of people who spend their time sleeping, queuing for food, wandering aimlessly around the huge warehouse or playing half-hearted games of football.

Mohamed Refaad, senior operations coordinator with the IOM, said the government, local authorities and Belarusian Red Cross were all working to support the migrants but more help was still needed with food, shelter and education for the children.

“We are working to increase efforts to supply all these needs,” he said.

Yuri Karay, a Belarusian presidential aide, said those who had declined the offer of homeward flights were still bent on getting to Europe. If any wanted to stay in Belarus, “they must understand that there are no unemployment benefits here, so people have to work for a living,” he said.

Jndali, the migrant from Syria, said he was still optimistic because he did not believe that children as young as one year old could just be left where they were.

Asked about his chances of getting to Europe, he said: “I think there is hope.”