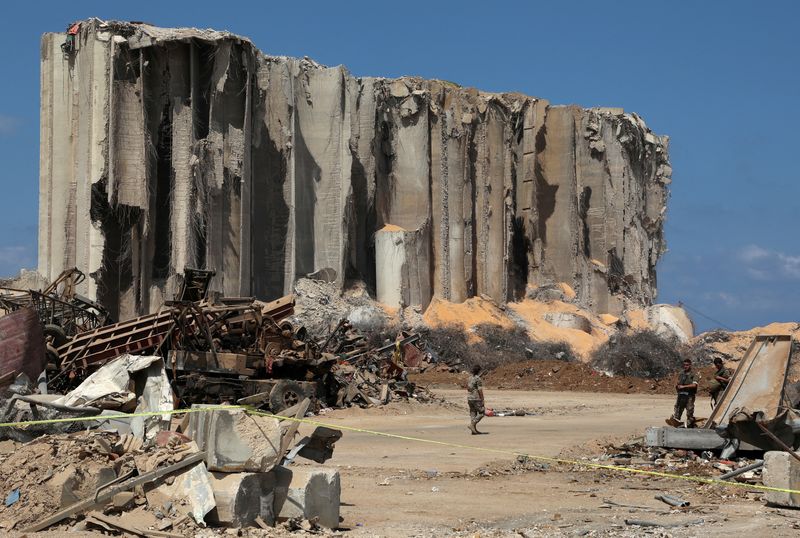 FILE PHOTO: Members of the Lebanese army walk near the damaged grain silo during a joint effort with the French military to clear the rubble from port of Beirut following the explosion, as part of a tour organized for media and journalists in Beirut, Lebanon August 26, 2020. REUTERS/Mohamed Azakir

BEIRUT (Reuters) – The judge investigating the deadly 2020 Beirut port explosion asked security forces on Friday to implement an arrest warrant he issued two months ago for a powerful former minister charged over the blast.

A number of current and former senior politicians and security officials have been charged in connection with the blast that killed more than 215 people, but have refused to be interrogated by Bitar, saying he lacks the authority to do so and is biased.

His probe has repeatedly been stalled by lawsuits filed by suspects seeking his removal. It resumed this week after being suspended for more than a month.

Bitar issued the warrant for Khalil on Oct. 12 after Khalil, a current member of parliament, skipped a planned interogation.

The same day, ministers loyal to Iran-backed Hezbollah and Amal, of which Khalil is a senior member, asked for Bitar’s removal during a Cabinet session and the goups staged a protest on Oct. 14 in Beirut against Bitar that descended into violence and armed clashes.

Cabinet has not met since.

Khalil – the right-hand man of Lebanon’s parliament speaker – has remained free and participated in public life, such as attending a parliamentary session on Tuesday.

Interior Minister Bassam Mawlawi, who oversees the Internal Security Forces, told Reuters he had not yet officially received Bitar’s request. He did not elaborate further.

Mawlawi previously did not respond when asked by a Reuters journalist why security forces under his command were not implementing the warrant.