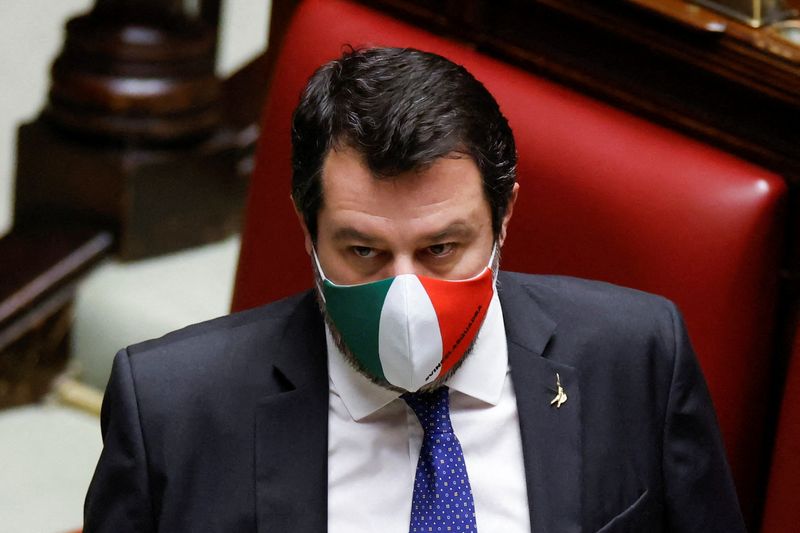 By Gavin Jones and Angelo Amante

ROME (Reuters) -Italy’s parties resumed talks on Tuesday to try to find a mutually acceptable head of state and avoid the threat of political instability after a first round of voting among lawmakers ended in stalemate.

Prime Minister Mario Draghi remains the most likely contender, but worries that his promotion to president might shatter his coalition government and trigger early national elections have complicated his prospects.

As a result, the race for the prestigious, seven-year role is wide open, with each political group cagily promoting candidates in behind-the-scenes negotiations.

A second round of voting will begin at 1400 GMT after a majority of the 1,008 lawmakers and regional delegates cast blank ballots on Monday, a way of playing for time while negotiations continue.

The president has a powerful role. He has the final say in naming the prime minister and is often called on to resolve political crises in the euro zone’s third largest economy, where governments survive barely a year on average.

A successful candidate needs a two-thirds majority in any of the first three rounds of voting, with the threshold lowered to an absolute majority in subsequent rounds. Parliament plans to hold one ballot a day.

Matteo Salvini, head of the rightist League, has carved out a position at the centre of the talks and has promised to present “several very high profile candidates, men and women,” to the other parties to try to overcome the deadlock.

The League and its conservative allies Forza Italia and Brothers of Italy plan to hold a news conference later on Tuesday to present these names, a political source said.

Salvini met separately on Monday with the leader of the centre-left Democratic Party, Enrico Letta, and former prime minister Giuseppe Conte, who heads the 5-Star Movement, the largest force in parliament.

“Salvini is the one who has the trump card and he has to decide when to play it,” former prime minister Matteo Renzi, who now heads a small centrist party, said on Tuesday.

Ahead of another meeting with Letta scheduled on Tuesday, Salvini denied media reports that he was negotiating behind the scenes with Draghi to secure more cabinet posts for the League in a new government in return for backing Draghi as president.

Letta and Conte will also meet at 1400 GMT to try to agree on a joint position, Conte’s spokesperson said.

Should Draghi fail to land the job of head of state, some commentators are suggesting he may not want to continue as prime minister if the multi-party coalition backing his government splits over the presidential election.

Some politicians have said they want outgoing President Sergio Mattarella to accept a second mandate. He has so far ruled this out.