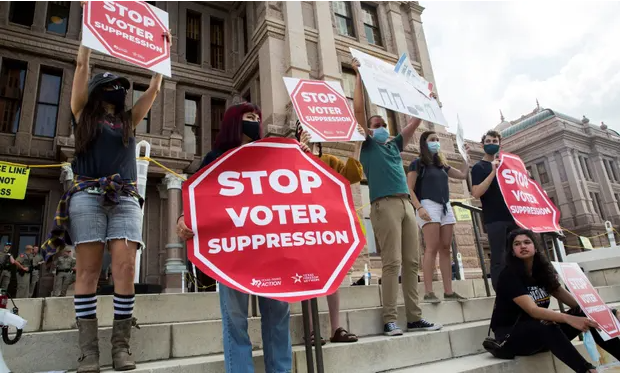 A top official at one of America’s most influential conservative groups bragged about playing a key role in crafting voting restrictions across the country, according to leaked video published by Documented, a watchdog group, and Mother Jones on Thursday.

Jessica Anderson, the executive director of Heritage Action for America, an advocacy group affiliated with the powerful Heritage Foundation, told donors in April that the group had both written statutes and provided support for lawmakers doing so. “In some cases, we actually draft them for them,” she said, according to Mother Jones. “Or we have a sentinel on our behalf give them the model legislation so it has that grassroots, from-the-bottom-up type of vibe.”

The comments shed light on the effort behind the scenes to shape new voting restrictions across the country. At least 361 bills have been introduced in the US since the November election, according to an analysis by the Brennan Center for Justice.

Anderson touted Heritage Action’s influence in several closely-watched states – Georgia, Arizona, Florida, and Iowa – all states that have implemented new voting restrictions in the wake of the 2020 election. In Iowa, which passed legislation that curtails the early voting period and makes it easier to remove people from the voter rolls. The group plans to spend $24m over the next two years.

“Iowa is the first state that we got to work in, and we did it quickly and we did it quietly,” she said. “We helped draft the bills. We made sure activists were calling the state legislators, getting support, showing up at their public hearings, giving testimony … little fanfare. Honestly, nobody even noticed. My team looked at each other and we’re like, ‘It can’t be that easy.’”

Heritage Action does not have to disclose its donors, but is extremely well funded, and has received money from the Koch brothers.

Anderson also claimed Heritage Action was involved in supporting efforts to pass a sweeping new voting law in Georgia earlier this year. Barry Fleming, a Republican in the state legislature, praised donors for their support.

“I can tell you, back in February, I felt like some days we were alone in Georgia,” he said. “And then the Heritage Foundation stepped in, and that began to bring us a boost to help turn around, get the truth out about what we were really trying to do. And I’m here in part to say thank you and God bless you.”

But an official in the Georgia secretary of state’s office familiar with the drafting of the Georgia legislation that eventually became law said Heritage Action was not involved in it.

“The only people actively writing and guiding SB 202 into its final draft were Representative Barry Fleming and secretary of state’s counsel Ryan Germany and Brian Tyson. They were individuals who were familiar with Georgia’s election system and knew what was possible to implement in order to make the process more transparent and secure,” the person said.

“Bills that aimed to limit access to the polling place were quickly and effectively sidelined,” the official added.

Anderson also touted the involvement of Hans von Spakovsky, a former justice department official who has been one of the key figures over the last several decades in spreading the myth of voter fraud across the US.

Ultimately, Anderson framed the effort to restrict voting as a political one.

“We are going to take the fierce fire that is in every single one of our bellies,” she said. “To right the wrongs of November.”

Anderson defended the group’s work in a statement to Mother Jones.

“We are proud of our work at the national level and in states across this country to promote commonsense reforms that make it easier to vote and harder to cheat. We’ve been transparent about our plans and public with our policy recommendations, and we won’t be intimidated by the left’s smear campaign and cancel culture.”