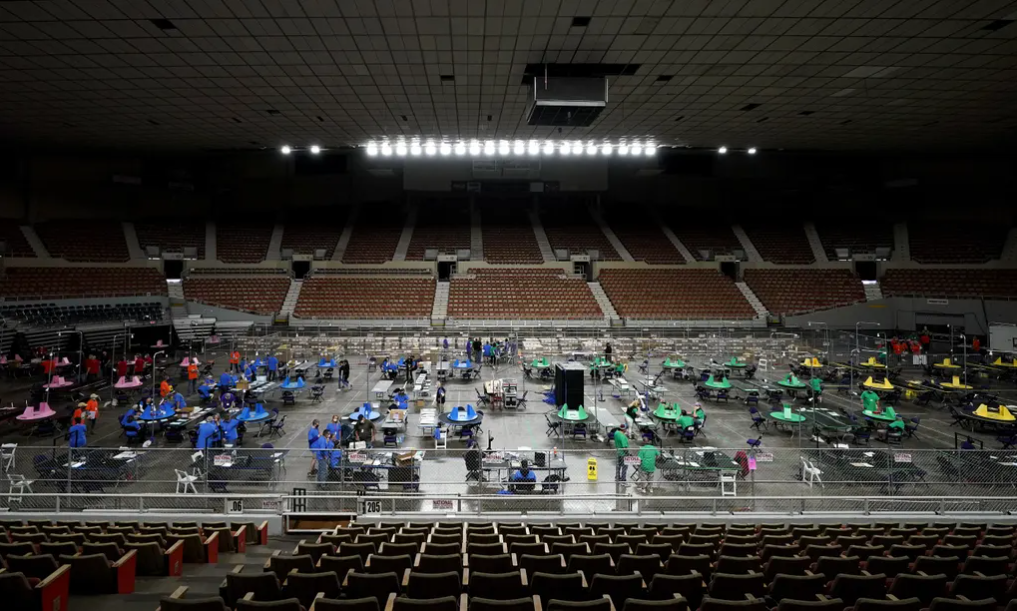 Election experts are watching the effort with alarm, saying officials are not using a reliable methodology – and fear it could be a model for Republicans to try elsewhere

One of the first things you see when you step outside Arizona Veterans Memorial Coliseum, the ageing arena in Phoenix, is the Crazy Times Carnival, a temporary spectacle set up in the parking lot. In the evenings, just as the sun is setting, lights from the ferris wheel, the jingle of the carousel and shrieks of joy fill the massive desert sky.

Inside the coliseum – nicknamed the Madhouse on McDowell – there is another carnival of sorts happening. The arena floor is where the Arizona senate, controlled by Republicans, is performing its own audit of the 2020 election in Maricopa county, home of Phoenix and most of the state’s registered voters. The effort, which comes after multiple audits affirming the results of the November election in the county in favor or Joe Biden, includes an examination of voting equipment, an authentication of ballot paper, and a hand recount of the nearly 2.1m ballots cast there. Republicans in the state legislature are simultaneously considering measures that would make it harder to vote in Arizona, which Biden carried by about 10,000 votes in November.

The review – unprecedented in American politics – may also be one of the clearest manifestations to date of Donald Trump’s false claims of fraud and the conspiracy theories that spread after the election (the former president and allies have loudly cheered on the Arizona effort). Far-right conspiracy theorists appear to be connected to the effort and the firm hired to lead the charge, a Florida-based company called Cyber Ninjas, has little experience in elections. The firm’s CEO has voiced support for the idea that the election was stolen from Trump.

Election experts are watching the unfolding effort with deep alarm, pointing out that officials are not using a reliable methodology – they hesitate to even label it an audit – and will produce a results that will give more fodder for conspiracy theorists. More troublingly, they worry the Arizona audit could be a model for Republicans to try elsewhere.

“There’s not gonna be a valid result,” said the Arizona secretary of state, Katie Hobbs, a Democrat who is the state’s top election official. “They’re writing the playbook here to do this around the country.” Indeed, Trump allies are already pushing for a similar effort in a small town in New Hampshire. Marjorie Taylor Greene, the far-right congresswoman in Georgia, has called for a similar audit in her state. 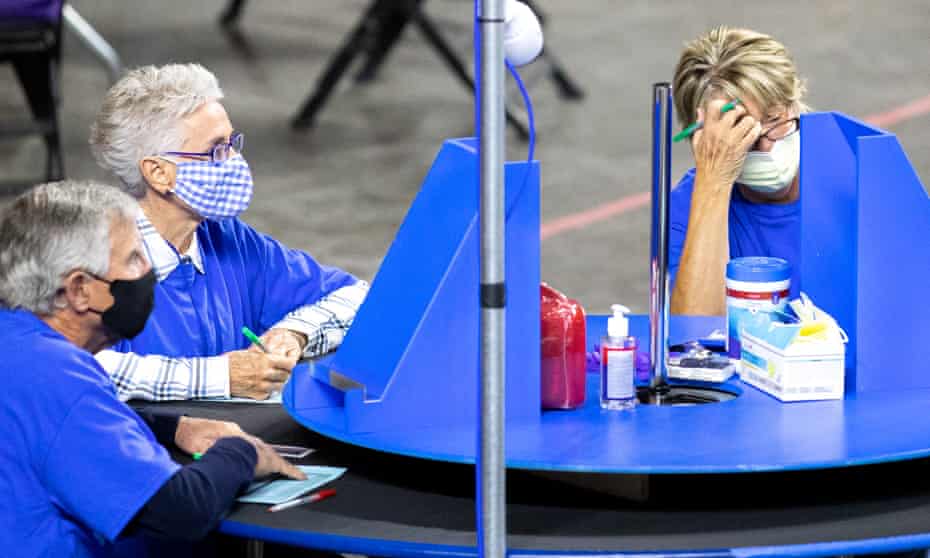 Trump and allies have cheered on the effort. Outside the arena, Kelly Johnson, a 61-year-old from California, was among a small group of five people sitting in a tent who supported the effort. Johnson, who said he was at the Capitol on 6 January, when rioters stormed the building, claimed Trump didn’t fully have a chance to make his case in court after the election. Judges across the country, including several appointed by Trump, rejected several lawsuits to try and overturn the election results.

A lot of people, he said, “are concerned … about whether or not the results are accurate because there has been no review, thorough review, accounting for results that anybody can have any confidence in”, he said.

Last week, Hobbs, who has received death threats over her opposition, sent a letter to audit officials detailing problems with how it was being conducted. Many of the audit’s publicly-released procedures are vague, she wrote, laptops left unattended, and there weren’t guaranteed procedures in place to protect the chain of custody of ballots. The justice department sent its own letter to the Arizona senate expressing similar concerns as well as questioning a plan to knock on voters’ doors and to confirm their 2020 vote, which could lead to voter intimidation.

Karen Fann, the Arizona senate president, replied on Friday, saying that auditors would “indefinitely defer” knocking on doors and that there were procedures in place to safeguard the ballots. She noted that the senate had hired Ken Bennett, a former Arizona secretary of state, to be “integrally involved in overseeing every facet of the audit”.

But during several interviews with reporters last week, Bennett – a mild mannered and cheery 61-year-old – said he was unable to provide basic information about how the audit was running. He declined to say how many ballots the auditors were counting each day, instead pegging the overall estimate at about 200,000 counted ballots (as of Monday it had gone up to 275,000). After Anthony Kern, a Trump elector and former state lawmaker, appeared at a ballot counting table, Bennett said he was unsure how workers were being chosen (the Arizona Republic reported that far-right groups were involved in recruiting counters for the audit). 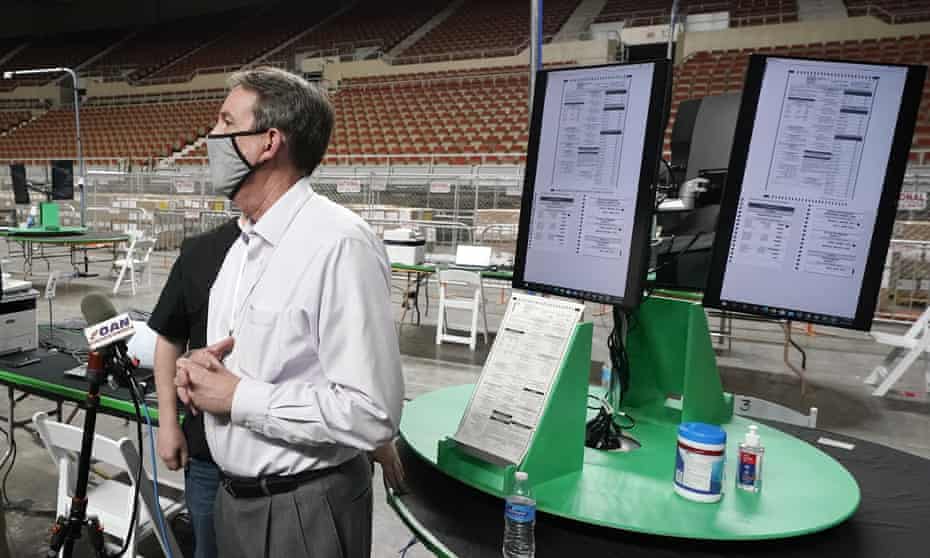 And while audits usually ensure that representatives from both parties are present to inspect ballots, it’s unclear to what extent that’s happening, if at all, in Phoenix. Bennett said that 70% of observers – who do not count ballots – were Republicans and the remaining 30% were independents, libertarians and Democrats.

While there were 46 tables set up to hold ballot counters in the arena last week, less than half of them were in use each day. Bennett told reporters repeatedly that the tables would soon be filled with additional workers who were undergoing background checks, but those workers have yet to materialize.

Officials have also been opaque about what exactly they’re looking for in their analysis for ballot authenticity. In late April, auditors were seen scanning ballots with UV lights, arousing suspicion because of a QAnon conspiracy theory that Trump watermarked legitimate ballots after the election. Last week John Brakey, an activist assisting with the audit, said officials were looking for bamboo fibers in a nod to a baseless conspiracy theory that ballots were smuggled in from China. “I do think it’s somewhat of a waste of time, but it will help unhinge people,” Brakey said Wednesday. “They’re not gonna find bamboo … If they do, I think we need to know, don’t you?” Bennett quickly distanced himself from Brakey’s comments, saying: “I think that’s more of a euphemism for saying, ‘We’re looking for everything related to the paper so that we can verify that the ballots are authentic.’”

Jeff Ellington, the president and CEO of Runbeck Election Services, which prints ballots for Maricopa county, said he couldn’t figure out what exactly auditors were looking for by examining the paper of the ballots.

“What they’re doing is so cryptic,” he said. “It’s hard to know exactly what their game plan is on that.”

Bennett and audit leaders have also declined repeatedly to comment on funding for the audit. The Arizona senate allocated just $150,000 to pay for the audit, far below the estimated cost. Trump-aligned figures, including attorney L Lin Wood and former Overstock CEO Patrick Byrne, have reportedly already donated to the effort. Two anchors with the One America News network, a far-right outlet, have also been fundraising. Last Tuesday, Christina Bobb, a reporter for the network, recorded a segment from the press box that both reported on the audit and promoted the fundraising effort. 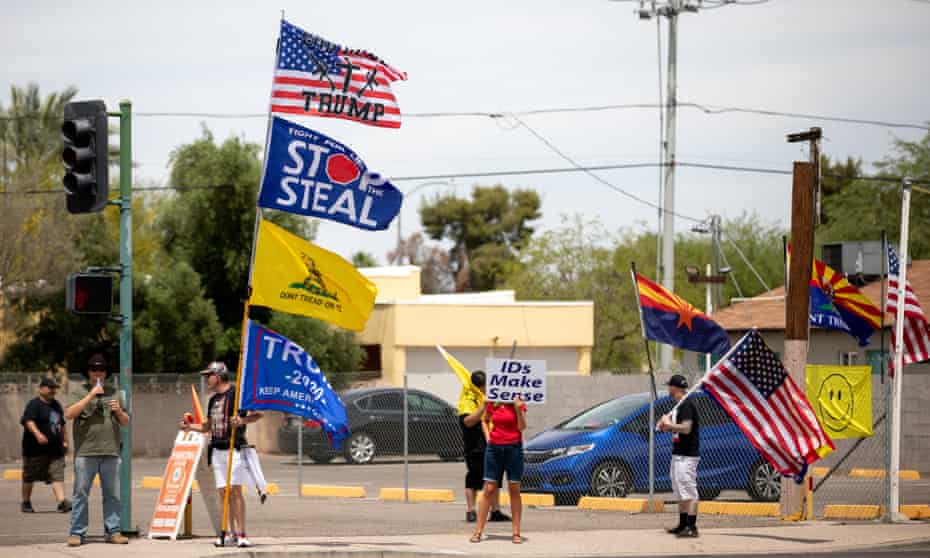 Last week, the counting itself looked relatively simple, even boring. Workers were divided up into four teams. Tables with lazy susans in the middle were scattered across the arena floor. Three workers sat at each table with a tally sheet and counted votes in the presidential and US senate race as the ballots spun around the table. Once they finished counting a batch, the ballots go to a second table, where workers photographed each side, and then scanned the ballots under microscopic cameras. Observers dressed in bright orange shirts roamed the floor and watched for wrongdoing. A banner for Phoenix’s women’s basketball team hangs high above the floor that says: “The Madhouse is our house.”

Despite the benign appearance, expert observers say there are glaring problems with the audit. Jennifer Morrell, a former election official designated a floor observer by the secretary of state’s office, noted that the ballots were spinning quickly around the table, giving counters little time to see the marks on the paper. In instances where there were discrepancies in the count, Morrell said she saw each table handle recounts slightly differently. She was also alarmed to see that once the ballots were tallied, there was no check to ensure that workers were entering aggregate totals into the software.

“There’s nobody verifying that what they entered was correct,” she said. “One person, single point of failure, as a former election official, someone who does audits, it’s a huge red flag for me,” she said.

The audit has been livestreamed online since it began in late April, but in-person public access is limited to just a handful of pool reporters who rotate in five-hour shifts and watch the effort from the arena’s press box, a dust-covered section about 20 rows up in the stands. It was close enough to see the counting on the floor, but not enough to see any details (some reporters brought binoculars to try and get a better view). Armed members of Arizona Rangers, a volunteer auxiliary law enforcement group, were stationed in the box and members accompanied reporters to the bathroom.

It’s not clear what exactly the endgame of the audit is. Hobbs said she expected the officials to issue a report based on procedures that would be difficult to replicate because the process was so opaque. And Bennett acknowledged last week there was likely to be some discrepancy between the auditors’ total and the official total.

Even though the audit won’t change the outcome of the 2020 race, it could still do damage by falsely making it appear that there was something amiss with election machinery.

“They are taking advantage of the lack of information that the public has regarding the complexities of our system. And they’re creating a false narrative, and they’re setting themselves up to sell that false narrative,” said Fontes, who lost his re-election bid in November.

That dynamic is already on display. Arizona Republicans last week accused Maricopa county of wrongly not turning over internet routers as well as administrative passwords for voting tabulators. County officials have resisted, saying that only Dominion, the election equipment vendor, has the passwords, which aren’t necessary to conduct an audit. Providing the routers, they said, would also jeopardize county security and personal information. The Maricopa county sheriff ,Paul Penzone, a Democrat, called the request for the routers “mind-numbingly reckless”. Conservative outlets have misleadlingly pointed to that denial as evidence of potential unusual activity.

This may be the ultimate point of the audit – not to bring any finality to the 2020 election, but simply to provide more rabbit holes to go down to question it.

Fontes, the former Maricopa county election official, doubted that the audit would change the mind of anyone who doubted the results of the election.