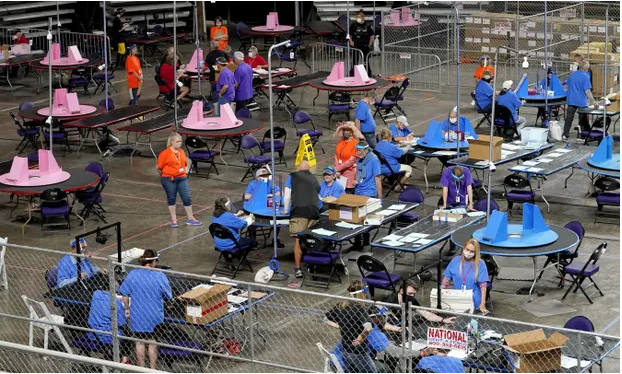 Election administration experts, who usually go out of their way to be non-partisan, are raising alarms about the process

By now, you’ve probably heard about the unprecedented effort to recount 2.1m votes in Arizona and all of the wacky conspiracy theories – including searching for bamboo fibers in ballots – that the effort seems to be amplifying.

I watched this effort in person for three days last week. Election administration experts – who usually go out of their way to be non-partisan – have raised alarms about the process. But as I watched it unfold in Phoenix from the press box about 20 rows up from the arena floor, I couldn’t shake the idea of how benign, even normal, the whole thing might look to a casual observer. Three different counters at each table were tallying ballots, which were then photographed and scanned – what exactly was happening that made this so dangerous?

I posed this question to Jennifer Morrell, who was on the floor observing the counting as a representative of the Arizona secretary of state’s office. Morrell, a former elections official from Colorado, specializes in the machinery of elections – the technology, the counting procedures and all the other wonky things that make elections run smoothly. She is not a flame-throwing partisan. But as we talked on the phone last week, I could tell from her voice that what she was seeing in the Arizona recount really bothered her.

One of the biggest red flags for her, she told me, came not during the counting, but afterwards, when workers entered the aggregated total tallies from counts into computers. Morrell was deeply worried that there was only a single person responsible for entering the data and no one to check that they weren’t inadvertently entering a wrong number or accidentally switching the candidates.

“There’s nobody verifying that what they entered was correct. There’s no reading out. These are things that you would typically see in an election office whether they were doing an audit, recount, where you want some sort of quality control mechanism in place,” she said.

Morrell also expressed concern with the procedures in place to keep a baseline count of the ballots being handled across the audit. If a box of ballots says it has a certain amount of ballots in it, workers should count when they open the box to make sure that there’s actually that amount of ballots in there. And when ballots leave each station, they should also ensure that all of the ballots are accounted for. Not every station in the audit is doing that.

At the counting table, the ballots spin around on a lazy susan to three different counters who are counting the presidential and US Senate races. As long as two of the three counters agree in their tallies and the third counter is within three votes, the tally is accepted. But when there is disagreement, the tables have to go back and redo their count. Morrell said she noticed that different tables had slightly different procedures for doing so. Some tables would go back and recount the whole batch of ballots, while others might just recount a smaller proportion of them.

“It’s the consistency that’s an issue for me,” she said. “There’s no audit or even recount process that looks like this.”

Aside from ballot counting, auditors are also performing a so-called forensic analysis of the ballot paper. The whole thing looks very hi-tech and official – ballots are photographed and then placed under a sophisticated-looking machine with microscopic cameras that is supposed to give a detailed analysis of the ballots.

Jovan Pulitzer, a failed inventor and conspiracy theorist, is reportedly helping auditors with this portion of their review. He purports to have developed technology that can detect fraudulent ballots by looking for folds in the paper, as well as analyzing whether the ballots were marked by a human or a machine, the latter of which is, in his view, suspicious.

Adrian Fontes, the former Maricopa county recorder who oversaw the 2020 election, said this process wouldn’t tell the auditors anything. If ballots arrive at an election office damaged, he said, they are duplicated electronically and then printed out with machine-made marks. This isn’t a sign of fraud – it’s a sign the process is working.

Tammy Patrick, a former Maricopa county election official who now works with election administrators across the country as a senior adviser at the Democracy Fund, also noted that folds in a ballot don’t tell you anything about a ballot’s authenticity.

“They are taking advantage of the lack of information that the public has regarding the complexities of our system. And they’re creating a false narrative, and they’re setting themselves up to sell that false narrative.” Fontes told me. “I’m afraid they’re going to come out and say ‘oh we found pre-printed ballots’ and there aren’t going to be enough people who stand up and say ‘well no shit.’”