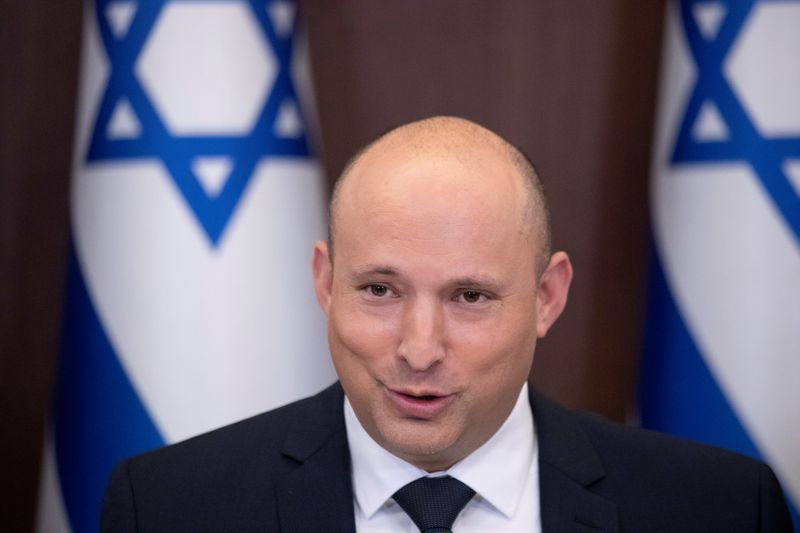 Bennett made the comments on Sunday as his top defence and intelligence officials headed to Washington to discuss the flailing talks.

Israel has been watching with concern as world powers sit down with Iran in Vienna in hopes of restoring the tattered 2015 deal. Last week, Iran struck a hard line as talks resumed, suggesting everything discussed in previous rounds of diplomacy could be renegotiated.

Continued Iranian advances in its atomic programme have further raised the stakes.

“I call on every country negotiating with Iran in Vienna to take a strong line and make it clear to Iran that they cannot enrich uranium and negotiate at the same time,” Bennett told his cabinet on Sunday.

“Iran must begin to pay a price for its violations.”

The original deal, spearheaded by then-President Barack Obama, gave Iran much-needed relief from crippling economic sanctions in exchange for curbs on its nuclear activities. But then-President Donald Trump, with strong encouragement from Israel, withdrew from the deal in 2018, causing it to unravel.

Last week’s talks in Vienna resumed after a more than five-month hiatus and were the first in which Iran’s new hardline government participated.

European and American negotiators expressed disappointment with Iran’s positions and questioned whether the talks would succeed.

Israel has long opposed the 2015 nuclear deal with Iran, known as the JCPOA, saying it did not go far enough to halt the country’s nuclear programme and does not address what it sees as hostile Iranian military activity across the region.

Prominent voices in Israel are now indicating the US withdrawal, especially without a contingency plan for Iran’s continuously developing nuclear plan, was a blunder.

But Israel’s new government has maintained a similar position to that of former Prime Minister Benjamin Netanyahu, rejecting a return to the original deal and calling for diplomacy to be accompanied by military pressure on Iran.

After the deal’s collapse, Iran stepped up its nuclear activities. Iran now enriches small amounts of uranium up to 60 percent purity – a short step from weapons-grade levels of 90 percent. Iran also spins advanced centrifuges barred by the accord, and its uranium stockpile now far exceeds the deal’s limits.

For now, Iran has shown no signs of backing down. Its chief negotiator, Deputy Foreign Minister Ali Bagheri Kani, suggested this the weekend that Iran plans to give a third list of demands to his counterparts. These would include proposed reparations after two pages worth of demands last week.

While Iran’s new President Ebrahim Raisi campaigned on getting sanctions lifted, there has been a sense that his negotiators now are waging their own maximum-pressure campaign.

Last week, the UN’s nuclear watchdog confirmed Iran began enriching uranium up to 20 percent purity at its underground facility at Fordow, as site that the deal had banned from conducting any enrichment.

Also during the weekend, Iran said it tested a surface-to-air missile defence system near its Natanz nuclear facility. Late on Saturday, people living nearby saw a light in the sky and heard a loud explosion.

“Any threat from the enemies will be met with a decisive and firm response,” state TV quoted Lieutenant-Commander Ali Moazeni as saying.

President Joe Biden has said the United States is willing to re-enter the deal, though the US was not a direct participant in the latest round of talks because of Washington’s withdrawal. Instead, US negotiators were in a nearby location and briefed by the other participants – including three European powers, China and Russia.

Although Israel was also not a party to the negotiations, it has made a point of keeping up lines of communication with its American and European allies during the talks, which are set to resume this week.

Israeli spy chief David Barnea headed to Washington late on Saturday for a previously unannounced trip and Defence Minister Benny Gantz will leave on Wednesday for meetings with his US counterpart Lloyd Austin and Secretary of State Antony Blinken. Foreign Minister Yair Lapid was in London and Paris last week to discuss the talks with Israel’s European allies.

Bennett said Israel was using the time between rounds to convince the Americans to “use a different toolkit” against Iran’s nuclear programme, without elaborating.

Mossad chief Barnea was expected to provide US officials with “updated intelligence on Tehran’s efforts” regarding its nuclear activities, the Yedioth Ahronoth newspaper reported.

Barnea will convey Israel’s messages to intensify sanctions on Iran along with putting a real military threat on the table against Tehran, the daily said. He will also inform Washington that Israel will not be bound to any nuclear deal with Tehran and will keep up efforts to quell Iran’s nuclear activity.

Israel and the US were widely believed to have carried out covert operations against Iranian nuclear personnel and infrastructure in a bid to sabotage the programme.

The current Israeli government has objected to a return to the 2015 deal, urging instead an accord that addresses other Iranian military behaviour, including its missile programme and support for armed groups such as Lebanon’s Hezbollah.

Israel has also supported a “credible” military threat against Iran as leverage.

A senior Department of State official said negotiators expected Iran to “show seriousness” at the talks. He said even Russia and China, important trading outlets for Iran that have traditionally taken a softer line in their relations with the country, left the talks last week concerned about the prospects for a deal.

“Every day that goes by is a day where we come closer to the conclusion that they don’t have in mind a return to the JCPOA in short order,” said the official, who spoke on condition of anonymity to brief reporters on the US assessment.

He said Iran could be using the talks as a cover for continuing to build up the nuclear programme, which it could then use as leverage.

European negotiators also expressed frustration with the Iranians. Senior diplomats from Germany, the United Kingdom and France said Iran has “fast-forwarded its nuclear programme” and “backtracked on diplomatic progress”.

“Unclear how these new gaps can be closed in a realistic timeframe on the basis of Iranian drafts,” they said.

Iran has maintained that its atomic programme is peaceful. However, US intelligence agencies and international inspectors have said that Iran had an organised nuclear weapons programme up until 2003. Nonproliferation experts feared any brinkmanship could push Iran towards even more extreme measures to try to force the West to lift sanctions.