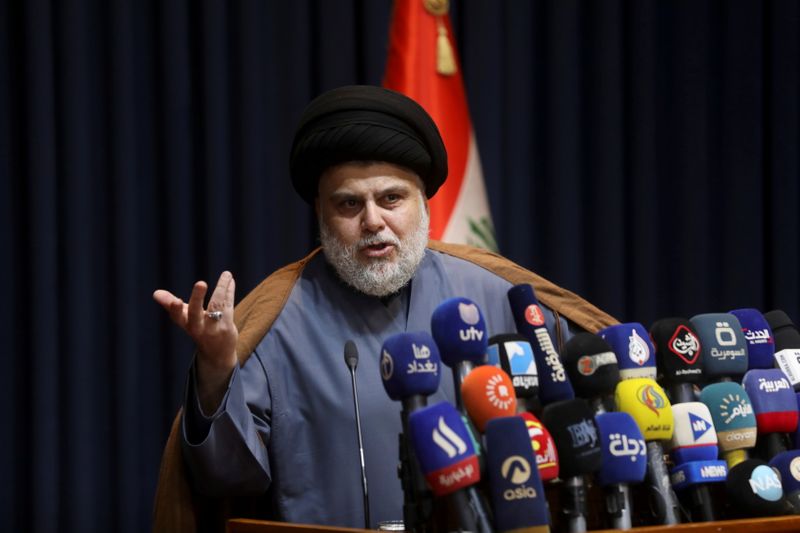 BAGHDAD (Reuters) – Powerful Iraqi cleric Moqtada al-Sadr urged the country’s paramilitaries on Thursday to purge what he called undisciplined members and for non-state armed groups to hand over their weapons.

The militias are disputing the result of an October general election that handed them a crushing defeat and have also staged sit-ins in Baghdad which turned violent this month.

Sadr, who commands his own militia but opposes all foreign influence in Iraq, including that of Iran, is seen as the main Shi’ite rival of the paramilitaries Tehran has backed.

“You must step back in order to regain the trust of the people,” Sadr said in a statement delivered to news cameras from his base in the southern holy city of Najaf.

“What you’re doing right now will tarnish your history and increase your alienation from the people.”

Sadr did not refer explicitly to recent events, but addressed his message to what he called the losing parties in Iraq’s election.

He called on Iraq’s state paramilitary grouping the Popular Mobilisation Forces, which is dominated by the Iran-aligned factions, to purge “undisciplined elements” and for non-state armed groups to dissolve themselves and lay down their weapons.

Sadr will likely have a big say in the formation of the next Iraqi government, a prospect that worries his main rivals the Iran-backed groups, according to Iraqi officials and independent analysts.

“If you want to participate in forming the next government, you must hold those corrupt among you to account,” he added.