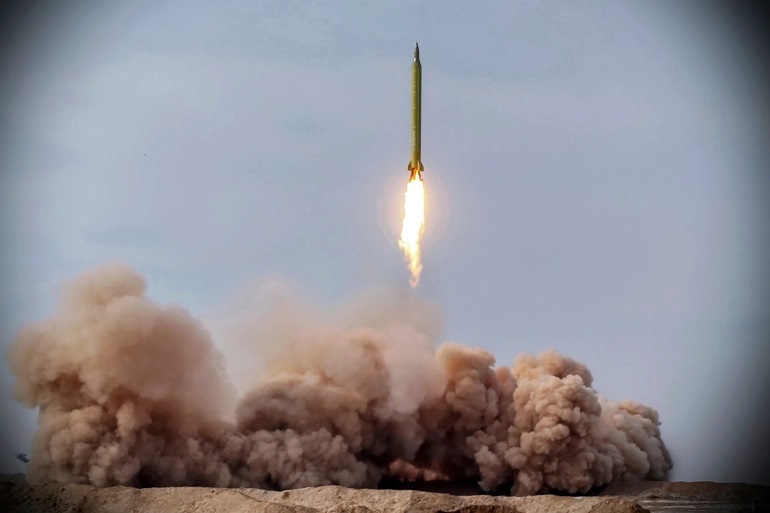 The IRGC on Saturday fired long-range ballistic missiles that travelled 1,800km (1,118 miles) and struck artificial targets in the northern part of the Indian Ocean.

“Choosing a plethora of long-range missiles to hit sea targets shows that if the enemies of the Islamic republic harbour any ill will toward our national interests, maritime trade routes or our land, they will be targeted and destroyed by missiles,” said Mohammad Bagheri, chief of staff of the armed forces.

“We have no intention for any aggression, but we announce with this drill that any aggressors to our country will be attacked with full force and in the shortest time.”

IRGC commander-in-chief Hossein Salami said on Saturday one of the elite military organisation’s goals is to be able to target “enemy war vessels” including aircraft carriers.

On Friday, the IRGC fired dozens of “next-generation” missiles from an undisclosed location in desert areas in central Iran that were shown in videos aired by state broadcasting to hit their land targets.

“This is the roaring sound of a large number of IRGC ballistic missiles, which have this time been equipped with detachable warheads and can be guided outside the Earth’s atmosphere,” a state broadcast reporter said as a barrage of missiles was launched behind him.

Shortly after, the IRGC also tested loitering munitions, or “suicide drones”, that were shown to hit a variety of land targets.

Tensions with the US

The fourth show of Iranian military force in the new year, the IRGC drill comes after two months of renewed tensions with the outgoing US President Donald Trump administration around the January 3 anniversary of the assassination of Iran’s top general by the United States.

Qassem Soleimani, who led the foreign operations arm of the IRGC, was killed in a Trump-ordered drone strike in Baghdad last year.

In the past two months, the US has flown nuclear-capable strategic bombers over the Middle East and has stationed an aircraft carrier in the region to “deter” a potential Iranian response.

Iran’s Foreign Minister Mohammad Javad Zarif, on the other hand, has accused the US of trying to “fabricate pretext for war”.

The Trump administration has only intensified its “maximum pressure” campaign, which started after unilaterally abandoning Iran’s 2015 nuclear deal with world powers in 2018, before president-elect Joe Biden enters the White House on January 20.

On Thursday, on the second day of a maritime drill by Iran’s army, personnel spotted – and captured on camera – a foreign submarine that quickly left the scene after receiving warnings. The submarine appeared to be American.

As part of the drill, the army inducted Iran’s largest military vessel into its fleet, fired torpedoes from locally made submarines, and conducted special forces operations.

On January 8, the IRGC unveiled a huge underground missile base along the Gulf coast that it said was one of “many” such bases.

‘Not looking to commit a crime’

Iran’s state broadcaster aired footage of missiles being fired at two US bases in Iraq last year in response to Soleimani’s assassination on Friday night for the first time.

In the footage, Amir Ali Hajizadeh, the head of the IRGC’s aerospace division, is shown in an operation room where he issues the order to fire the missiles that inflicted damage on the US bases, but no fatalities.

“We’re firing the missiles one by one so the people can get away. We’re not looking to commit a crime,” he said, calling Trump a “criminal”.

A recent interview with Hajizadeh was also aired, in which he said 13 missiles were fired at the bases and the US was on high alert but did not know where Iran would strike.

He also said then-Iraqi prime minister Adel Abdul Mahdi was informed “out of respect” that US targets would be hit by Iranian missiles – without knowing the location – only half an hour before the strike.

Hajizadeh claimed that Iranian missiles killed an unknown number of US troops, saying the Americans “themselves brought the dead out from under the rubble, but first dismissed the Iraqis from the location”.

“We had readied 400 missiles just for those first moments,” he said of Iran’s anticipation for a potential US reprisal, adding Iran could cause “irreparable damage” to all US bases in the region by firing 500 missiles at the same time.