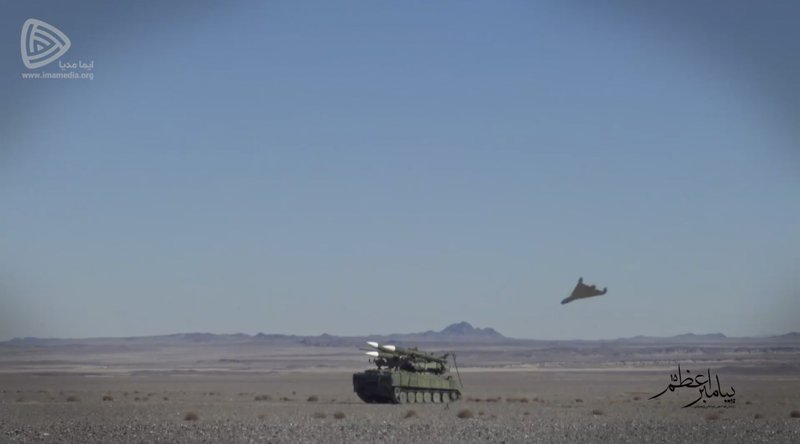 Iran has long denied launching the attack on the sites of Abqaiq and Khurais while Yemen’s Iran-backed Houthi rebels initially claimed the assault.

However, the United States, Saudi Arabia and U.N. experts believe the drones were Iranian, likely launched amid an escalating series of incidents stemming from President Donald Trump’s unilateral withdrew from Tehran’s nuclear deal with world powers.

The Guard’s decision to use the drones on Friday alongside a series of missile drills comes as Iran tries to pressure President-elect Joe Biden over the nuclear accord, which he has said America could re-enter.

Tehran recently seized a South Korean oil tanker and begun enriching uranium closer to weapons-grade levels, as the U.S. sent B-52 bombers, the USS Nimitz aircraft carrier and a nuclear submarine into the region as a deterrent in Trump’s final days as president.

“The nuclear issue is likely to be the Biden administration’s first foreign policy test,” wrote Simon Henderson, an analyst with the Washington Institute for Near-East Policy. “Ultimately, the United States holds the best hand, but Iran may still be able to play the game quite well, even with a weak hand.”

Iranian state television described the drill as taking place in the country’s vast central desert, the latest in a series of snap exercises called amid the escalating tensions over its nuclear program. The footage showed four of the unmanned, triangle-shaped drones flying in a tight formation.

Another scene showed the drones smash into targets Iran described as being “hypothetical enemy bases” and detonate. One target appeared to be a missile vehicle — a telling target in a region where American forces and their Gulf Arab allies rely on Patriot missile batteries for defense.

Looking at the footage frame by frame, the triangle-shape drone appeared to have two fins on either side. This strongly resembles the so-called “Delta” drones used both in the Abqaiq and Khurais assault in September 2019, as well as a May 2019 attack on Saudi Arabia’s crucial East-West pipeline. Saudi Arabia showed damaged drones to journalists after the attacks, while U.N. experts included images of the drone in a report.

Experts refer to such bomb-carrying drones as “loitering munitions.” The drone flies to a destination, likely programmed before its flight, and either explodes in the air over the target or on impact against it.

Iranian officials did not acknowledge the resemblance, nor did they immediately identify the drones used.

“The message of this drill is our might and firm determination to defend our sovereignty, our holy ruling system and our values against the enemies of Islam and Iran,” said Gen. Hossein Salami, the Guard’s top commander.

The Guard also launched solid-fuel ballistic missiles named Dezful and Zolfaghar during the drill, with state TV repeatedly airing imagery of the simultaneous launch of eight missiles from truck-based launchers.

Iran’s missile program has a 2,000-kilometer (1,250-mile) range, far enough to reach archenemy Israel and U.S. military bases in the region. Last January, after the U.S. killed a top Iranian general in a drone strike in Baghdad, Tehran retaliated by firing a barrage of ballistic missiles at two Iraqi bases housing U.S. troops, which saw dozens of troops injured with concussions.