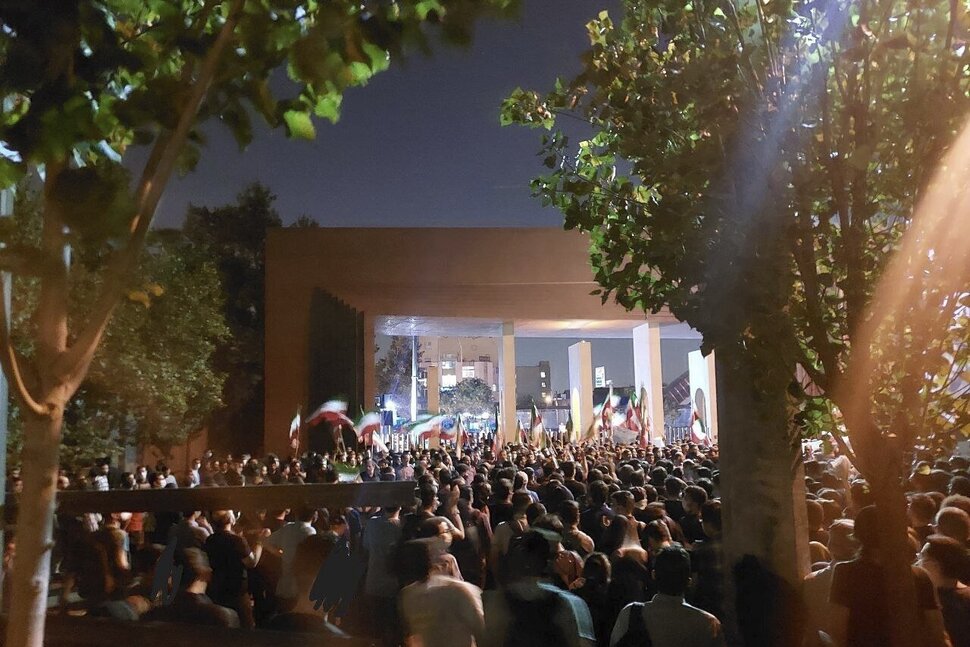 As demonstrations erupt across Iran, the country’s elite technical university has emerged as an unexpected hub for protest.

The aging brick campus of the Sharif University of Technology, Iran’s elite technical school, has long been a magnet for the nation’s brightest minds, with a record of elevating its students to the highest reaches of society.

Thousands of Sharif University alumni power Iran’s most sensitive industries, including nuclear energy and aerospace. One of supreme leader Ayatollah Ali Khamenei’s closest advisors has taught there for decades.

But as demonstrations erupt across Iran — first sparked by the death in September of 22-year-old Mahsa Amini in the custody of the country’s morality police — the scientific powerhouse known as “Iran’s M.I.T.” has emerged as an unexpected hub for protest, fueling Iran’s biggest antigovernment movement in over a decade.

“We’ve become politically active because there is nothing to lose,” said an electrical engineering major and activist in Sharif University’s student association who spoke on condition of anonymity. Like others who insisted their identities be shielded, he feared of reprisals. “The way things are now in Iran, you have to emigrate and leave your family and friends or stay and fight for your rights.”

Across the country and despite a violent crackdown, Iranians have taken to the streets, venting their outrage over social repression, economic despair and global isolation — crises that have clipped the ambitions of Iran’s young and educated generation. Over the last few weeks, university campuses have become a hotbed of opposition after years of dormancy, as students take up the mantle of activism they haven’t held in years.

“Students have come to the realization they will not achieve their rights in this framework,” said Mohammad Ali Kadivar, an Iran scholar at Boston College. “They are demanding the end of the Islamic Republic.”

Protests have flared nearly every day for the past month at Sharif University — and escalated after security forces cracked down violently on Oct. 2, resulting in an hourslong standoff between students and police that prompted an international outcry and shocked the country.

“Whether it’s true or not, people have this feeling that it’s safer to protest on campus,” said Moeen, a Sharif University alum who has observed the protests and spoke on condition that only his first name be used. “It’s easier than orchestrating something at a random square in Tehran. There are student syndicates. There’s leadership.”

University campuses have been pivotal to Iran’s opposition movements before. After the U.S.-backed 1953 coup, University of Tehran students revolted over then-Vice President Richard Nixon’s visit to the capital. The shah’s security forces stormed the campus and shot three students dead.

Sharif University, among other campuses, was wracked by protests two decades later, when Marxist and Islamist student groups lit the fuse of the 1979 Islamic Revolution, which ushered in the clerical establishment that still rules Iran.

Once in power, the young theocracy worked to ensure universities would no longer be breeding grounds for opposition: The clerics purged professors, arrested dissident students and set up their own powerful student associations.

Political issues occasionally galvanized students despite the risks. Pro-reformist students protested at the University of Tehran in 1999, prompting a fearsome raid by security forces who fatally shot a student and flung others out of windows.

But broadly over the decades, Tehran’s campuses became subdued, students and experts said, particularly Sharif University — a competitive, high-tech hub considered less liberal and activist than others in the capital. Amid American sanctions and raging inflation, some students joked the university was essentially an airport, as the best and brightest students rushed to leave for Europe and the U.S. after graduation.

A turning point came in 2018, students said. Former President Donald Trump pulled the U.S. out of Tehran’s landmark nuclear deal that year and reimposed harsh sanctions. Deepening global isolation and frustration over lagging political reforms convinced many students that nothing would come of engaging with the system.

A year later, in the fall of 2019, a fuel price hike set off the deadliest nationwide unrest since the Islamic Revolution. The Sharif Islamic Association, a misnomer for the students’ largely secular representative body, jumped into action, organizing demonstrations on campus.

“We have no industry, we are in a bad economic situation, the environment is ruined,” said the student association activist, listing the reasons for protest. “But the biggest reason is freedom. We just want basic things that you have all over the world.”

When news spread of Amini’s death after her arrest for allegedly violating Iran’s strict rules on women’s dress, students buzzed. Iran’s government insists Amini was not mistreated in police custody, but her family says her body showed bruises and other signs of beating after she was detained.

“Even my conservative friends said, ‘If we don’t take to the streets now, we never will’,” Moeen said.

Sharif University authorities denied the student association a protest permit, members said. Crowds demonstrated anyway, pumping their fists and chanting “Death to the dictator!” — a slogan that protesters have used around the country.

On Oct. 2, the protests devolved into violent mayhem, according to statements from the association.

As hundreds of students chanted against Khamenei, plainclothes security forces raided campus. Professors formed a human shield so students could flee. But security forces beat the professors, ripped through their interlocked hands and chased protesters into the parking garage.

They unleashed paintballs, tear gas and metal pellets on shrieking students. Several were wounded and some 40 were arrested, most of whom have now been released.

“It was brutal,” said one professor who witnessed the events. “For the sake of its own future, the government should care about these students. They’re the nerds. But it was clear it only cared about oppressing them.”

Tensions were further inflamed when the minister for higher education, Mohammad Ali Zolfigol, visited the campus and, instead of reassuring students, accused them of “lawlessness” and warned they’d be held responsible, according to a computer engineering student who attended the meeting and videos posted online.

In an attempt to defuse the resentment, the university created a forum, billed as a safe space for students to voice their complaints. The university president, the U.S.-sanctioned Rasool Jalili, who served on Iran’s Supreme Council of Cyberspace, presided over the program.

Women boldly took the stage without the mandatory hijab, according to videos shared by members of the association. Students lashed out at the university for its failure to protect them.

And there were consequences to speaking out. On Sunday, the university announced it would temporarily ban over two dozen students who contributed to the “unstable environment.”

That prompted more demonstrations, as students raged against both university authorities and the ruling clerics. Most recently this week, female students streamed into the male-only section of the dining hall in protest over campus gender segregation as male students cheered them on. The university closed the cafeteria on Tuesday, hoping to end the demonstrations.

Instead, the students moved their lunch to the campus yard, videos showed. A professor joined in solidarity. Young women and men picnicked side by side on the pavement, chanting: “Woman! Life! Freedom!”