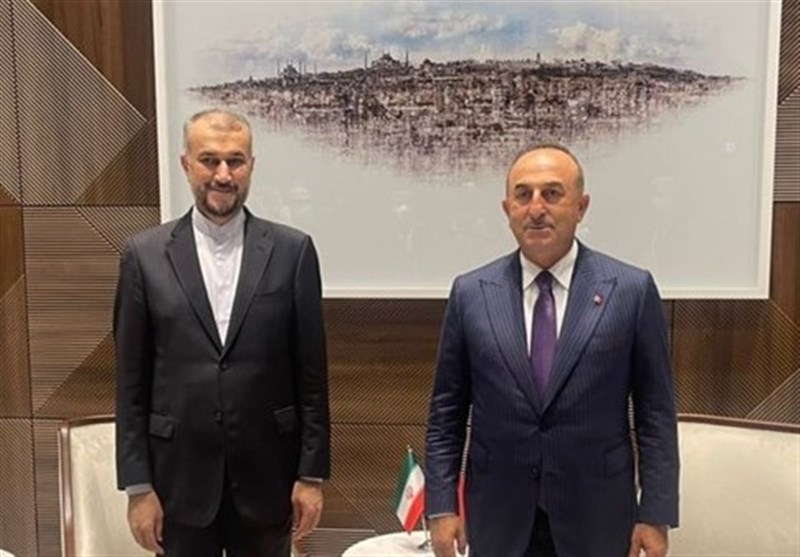 TEHRAN (Tasnim) – The foreign ministers of Iran and Turkey talked about collective efforts to ensure stability and fight against terrorism in Afghanistan, as Tehran is going to host a ministerial meeting of the Afghan neighbors next week.

In a telephone conversation on Thursday, Iranian Foreign Minister Hossein Amirabdollahian and his Turkish counterpart Mevlut Cavusoglu discussed a range of issues, including Tehran-Ankara ties, the developments in Afghanistan, the Astana summit on peace in Syria, the 7th strategic meeting between Iran and Turkey, and also reciprocal visits by the high-ranking officials of the two countries.

Voicing concern about a surge in the terrorist attacks on worshippers in Afghanistan, Amirabdollahian said the Muslim countries are expected to play a more active role in this regard.

He described the next week’s meeting of Afghanistan’s neighbors in Tehran as an opportunity for the countries to exchange views on how to pave the way for a stable Afghanistan which would be free of terrorism and violence in order to fulfill the will the Afghan people.

For his part, Cavusoglu expressed worry over a rise in the terror attacks in Afghanistan. The Turkish foreign minister underlined the need for taking practical measures to prevent acts of terrorism, form an inclusive government in Afghanistan, and consolidate efforts to step up the fight against terror groups like Daesh (ISIL or ISIS).

He emphasized that all neighbors of Afghanistan should help with the battle against terrorism.

Elsewhere in the phone call, Amirabdollahian reaffirmed Iran’s policy to support the independence, sovereignty and territorial integrity of neighboring countries and to prevent the hostile plots from disrupting relations between neighbors.

Both foreign ministers highlighted the importance of the Economic Cooperation Organization (ECO) summit for strengthening regional cooperation, emphasized the need for continued consultations between Tehran and Ankara, and urged continued visits by the officials of the two countries for discussion on the issues of mutual interest.

The top Iranian diplomat also briefed his Turkish counterpart on the latest developments in the talks on the revival of the Joint Comprehensive Plan of Action (JCPOA).