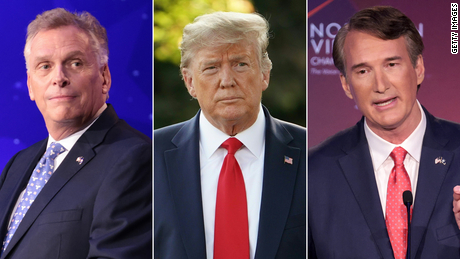 Share
Tweet
Share
Share
Email
Comments
Yet in Virginia, and even nationally on the generic congressional ballot, Democrats are holding onto slim within-the-margin-of-error advantages.
Why? It could be in part because former President Donald Trump is unusually present for a politician not in office, and he’s as — if not more — unpopular than Biden.

You can see the Trump dynamic playing out in real time on the campaign trail. Democratic candidate Terry McAuliffe has repeatedly tried to tie Republican nominee Glenn Youngkin to the former President, both in his speeches and ads. Youngkin is walking a fine line, leaning into some of Trump’s rhetoric to help boost Republican turnout, but also distancing himself on certain issues and playing up hyperlocal issues to appeal to the center of the electorate.
With a little under two weeks to go until Election Day, McAuliffe’s plan may just work. McAuliffe holds a nominal advantage of about 2 to 3 points over Youngkin in a recent average of polls. If you look back at more than 240 gubernatorial elections with polling since 1998, a lead of this size in the final three weeks of the campaign has held up about 70% of the time. (Hillary Clinton had similar odds of winning based on the pre-election polls in 2016.)
If the polls were exactly right, McAuliffe would greatly underperform Biden’s win last year and current Gov. Ralph Northam’s win in the 2017 governor’s race. They won by 10 points and 9 points, respectively. The drop in McAuliffe’s position relative to other Democrats shouldn’t be surprising given that Biden’s net approval in the state in recent polling has averaged about -2 points.
Still, a lead is a lead, and McAuliffe is outrunning Biden’s net popularity rating by a little less than 5 points.
The same polling reveals that Trump remains deeply unpopular in the state. A Fox News poll released last week had his net favorability rating (favorable – unfavorable) at -9 points among likely voters and -18 points among registered voters. Trump’s more unpopular than McAuliffe or Youngkin, who both sported positive net favorability ratings in the Fox News poll among likely voters.
This seems to matter.
You can see how closely feelings toward Trump and vote choice align by looking at the crosstabs of the Fox News poll. On a scale of -1 to +1, the correlation across demographic groups between Trump’s unfavorable rating and McAuliffe’s standing in the horse race was over +0.98. You rarely get that type of correlation between the popularity of an out-of-office politician and vote choice. It’s nearly the same as Biden’s popularity and vote choice (over +0.99 correlation).
Indeed, a CBS News/YouGov poll from Virginia shows just how motivating a factor Trump is in whether voters cast a ballot. A majority of likely voters (51%) said feelings about Trump were very motivating. That’s basically the same as the 48% who said the same thing about their feelings toward Biden.
Separate polling from a Monmouth University poll in August showed that about the same share of Virginia voters indicated that Trump was a major factor in their 2021 vote as they did in 2017.
This is something we’re seeing nationally as well. Trump continues to cast a shadow in a way I’m not sure we fully appreciate.
Over the last week, Trump actually slightly leads Biden in the number of people searching for them on Google. During the same week in Trump’s presidency, he led former President Barack Obama by nearly a 9:1 ratio in searches. And in the same week in Obama’s presidency, Obama led former President George W. Bush by over a 9:1 ratio in searches.
Trump being this much in the spotlight probably hurts Republicans more than it helps. Trump had a -13 point net favorability rating in a Quinnipiac University poll this week. Biden’s was -12 points in the same poll. Other polls have Biden’s net popularity ratings in a somewhat better, though still negative, position.

An incumbent president in negative territory in their net popularity rating would usually spell doom for the president’s party in the midterms. I’d still bet on that being the case.
But right now, Democrats maintain a low single-digit lead on the generic congressional ballot. That’s not much different than their 3-point win in the House popular vote in 2020.
Of course, we’ll just have to wait and see what happens going forward. If Youngkin ends up emerging with a win in Virginia, it’s going to be tough for people to argue that Trump is hurting Republicans that much.
If, on the other hand, McAuliffe is the victor, it will likely lead to plenty of discussion about whether it’s good for Republicans to continue to have Trump this present on the political scene.