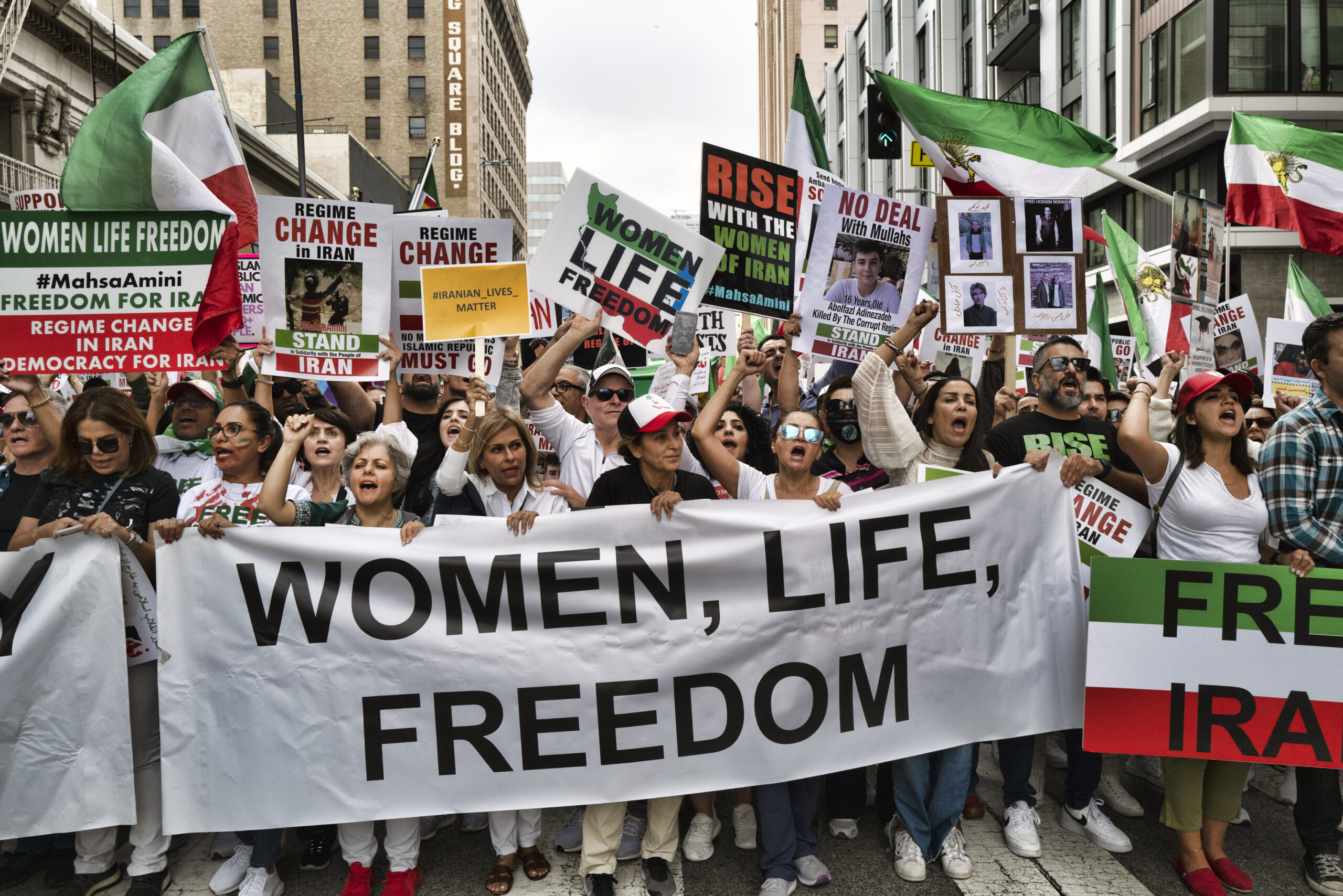 The death of Mahsa Zhina Amini and two executions of protesters in one week stemming from the “Women, Life, Freedom” uprising that followed Amini’s killing are not always top of mind for American audiences.

But those events are all that three Colorado women of Iranian descent can think about. All in their early 40s, they visited Colorado Matters this week to share insights into the women-led resistance to the Iranian regime that is keeping them up at night and giving them nightmares, as they learn of events from a distance.

“It’s very hard to be an Iranian in a body that is safe right now,” said Poupeh Missaghi, an assistant professor of Literary Arts and Studies at the University of Denver and Persian-English creative writer and translator who lives in Denver’s Capitol Hill neighborhood.

“It’s very hard to be functional in a country that is having a different life, a different experience, and then you are divided between two different realities. It’s like your body is here and not here.”

Her eyes filled with tears as she and two other women of Iranian descent discussed the recent events in their homeland.

Two men have also recently been executed, one Monday early in the morning, the other last Thursday, for being a part of the resistance movement. According to reports, Monday’s execution victim was a 23-year-old man apparently forced to confess he’d killed two members of the paramilitary militia force. He’d been detained for about three weeks before he was hanged from a crane. His mother was called on the phone and told the coordinates to the plot where he’d been buried, according to reports.

“We are talking about 20-year-olds who are completely innocent. They should be praised and medaled for bravery and protecting their sisters and others in the crowd. And yet they’re being executed in the most inhumane way — they’re being tortured and forced into false confessions and then executions,” Shideh Dashti said.

Dashti participated in the roundtable interview virtually, but her voice was just as emotion-filled from a distance.

Dashti grew up in Tehran and moved to the United States in 1999. Since 2011, she has worked at CU Boulder, training aspiring engineers to be globally engaged in research and practice. She is an Associate Professor in Civil, Environmental, and Architectural Engineering and the Acting Associate Dean for Research in the College of Engineering and Applied Science.

“These are athletes; these are our next scientists, and we are losing them one by one,” she said.

The lives of many people have been lost in a revolutionary effort, according to Farnosh Family, who was born in Tehran in 1980 and moved to the U.S. five years later, growing up in New York. She came to Colorado 10 years ago and now owns and runs a small packaged food company that sells ghee, a clarified butter, and other products to grocery stores. She lives with her husband and her two kids, ages 7 and 9.

“There is so much hope that is built into right now, but it is also so painful because we’re seeing this daily brutality and bloodshed and lives lost. And it’s been very, very difficult,” Family said.

She said her child’s name is Kian, the same first name as a 9-year-old boy shot to death in Iran while riding in a car with his father when they left a protest. Crowd control in Iran involves the regime shooting into crowds, she said. The connection between the two Kians had her reaching for a box of tissues; she mentioned that she could look forward to seeing her Kian when she went home, although the other mother no longer can. 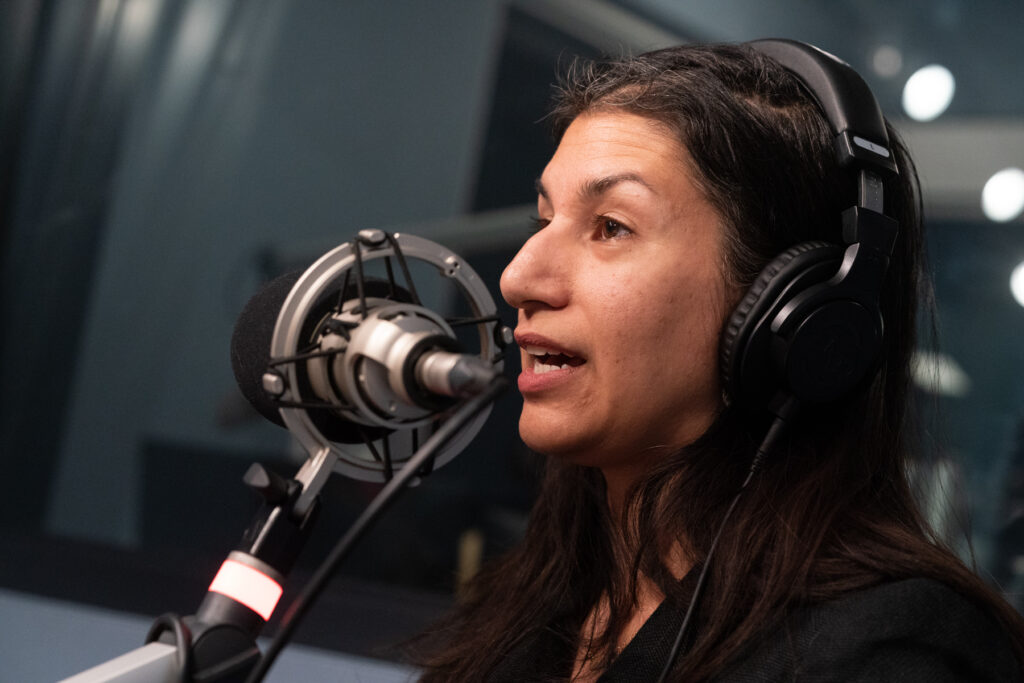 Farnosh Family, who was born in Tehran, Iran in 1980 and moved to the U.S. five years later, growing up in New York.

Concern for those protesting and detained

According to the three, the movement has echoes to the Black Lives Matter movement that featured protestors of all races around the world marching while shouting “Say Their Names!” and uplifting those killed stateside by lethal police force — George Floyd, Mike Brown, Trayvon Martin, Sandra Bland, Alton Sterling, Eric Garner and many other Black people in recent years.

“When we named George Floyd, that gave the movement power. I mean, it is the same thing with Mahsa Amini, just amplifying and naming them gives us power and helps sustain us,” Missaghi explained.

She decided to say the names of 12 people facing execution in Iran because of their involvement with the revolution. She arrived at the interview with a list of their names. Setting it before her, she lovingly and respectfully spoke each person’s name aloud, careful to pronounce each name right.

Afterward, she said that the list was already out of date — one of the people whose name she spoke, Majidreza Rahnavard, had been executed about ten hours before, according to the BBC.

In addition, Nilofar Hamedi, the journalist who broke the story of the murder of Amini, a 22-year-old Kurdish woman, by publishing a photo of her parents consoling each other in the hallway of a hospital is now imprisoned, held in solitary confinement.

Since the action began about three months ago, it has been reported that nearly 500 protesters and at least 71 children have been killed, according to Human Rights Activists News Agency. The agency also reported that protests have happened in 160 Iranian cities, with more than 18,000 arrests. The regime has been shooting women in the breasts, genitals, and eyes, to destroy their beauty, one report noted.

The reported 18,000 people who have been detained are in danger, the guests said.

“There was a letter that was signed by the Parliament that asked for their execution,” Dashti said, adding that they’ll all suffer, whether they get executed or not.

“Even if they are not executed, they’re routinely put in solitary confinement,” she said. “They’re raped, they’re tortured, and some of them, when they come out, they commit suicide.” 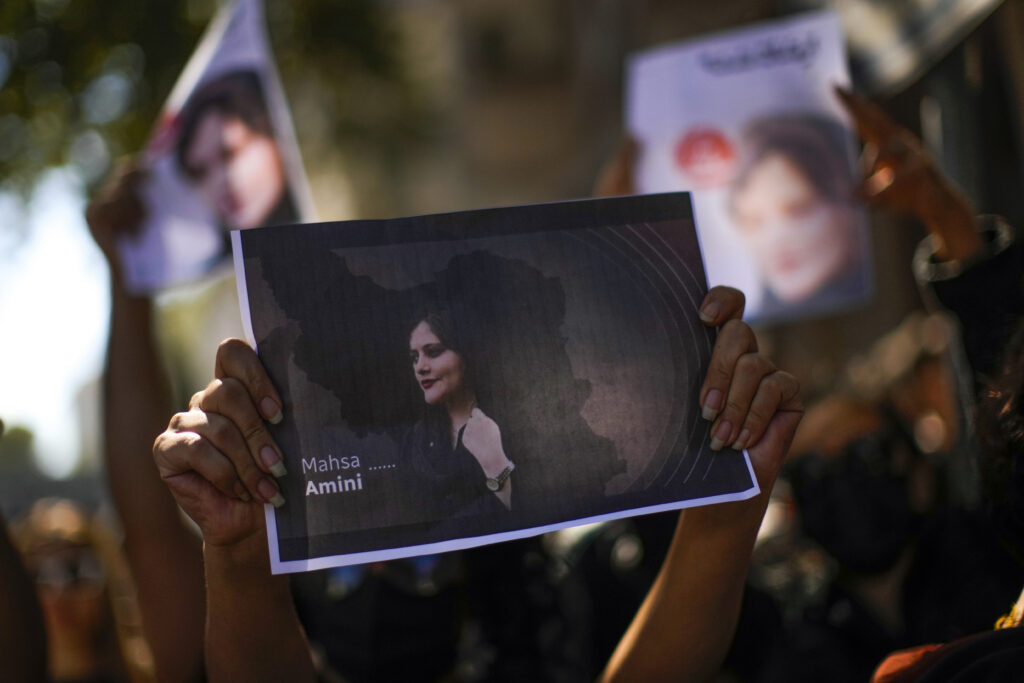 A woman holds a photo of Mahsa Zhina Amini during a protest against her death, outside Iran’s general consulate in Istanbul, Turkey, Wednesday, Sept. 21, 2022.

What they’d like to see in the international response, from governments to individuals

All of the suffering leads to the question of what can people here in Colorado do to show support and solidarity. Dashti, the engineering professor at CU, had some thoughts on that.

“We want elected officials (in the US) especially at the federal level to hold the Islamic Republic’s agents accountable in the court of law,” she said.

Another action she would like to see is targeted sanctions to the key leaders of the Islamic Revolutionary Guard Corps.

This is something the U.S. took some steps on 40 days after Amini was killed.

In October, Secretary of State Antony J. Blinken released a press statement saying the U.S. joined Amini’s family for a day of “mourning and reflection.” It also said it was committed to holding accountable those responsible for the “brutal crackdown” against the rebellion.

The press release said the U.S. had designated six Iranian government officials as “responsible for or complicit in serious human rights abuses” and stated that the U.S. was “identifying and imposing sanctions on two individuals and one entity implicated in extrajudicial killings, torture, or other gross violations of internationally recognized human rights committed against individuals in Iran.”

This week, the United Nations also expelled Iran from the Women’s Commission.

“Twenty-nine members of the UN’s Economic and Social Council voted Wednesday in favor of a resolution proposed by the United States to remove with immediate effect the Islamic Republic of Iran from the Commission on the Status of Women for the remainder of its 2022-2026 term,” CNN reported, adding that eight member states voted against the resolution, and 16 abstained.

But Dashti’s suggestions would have a more direct and immediate impact: “For example,” she said of those involved in the regime and its activities, “freeze their assets, restrict their traveling ability.”

She added that the U.S. media should increase coverage on their crimes against humanity. She would also like to see barriers to technology in Iran removed, so that citizen journalists can more easily communicate what’s happening to the rest of the world.

Messaghi, who knows people of Iranian descent in Colorado and other states whose employers and colleagues have not reached out to them to see if they are ok, said Coloradans could make small gestures of concern that she says can have as powerful of an impact on individuals as larger actions taken by political leaders could have more broadly.

“If you are working in a company, reach out to your Iranian colleague,” she suggested.

Opening a dialogue is received as support, even if the only outcome is conversation, because it shows concern for how what’s happening across Iran right now impacts someone personally, she said.

“If you consider yourself a feminist, you can’t be a feminist in the U.S. and not pay attention to the feminist revolution in Iran,” she said. “If you are a union member, you can’t really disregard the fight of Iranian laborers on the ground. Seeing everything as interconnected is very important.”

‘If you talk to any woman who has ever visited or lived in Iran, they have had an experience with the regime’s brutality and inhumanity’

This revolution began because a woman was killed for not wearing her hijab properly, in addition to many other grievances that have piled up over 43 years of the Islamic Republic’s rule over Iran (including severe inflation, unemployment, widespread discrimination against religious minorities, and lack of the most basic forms of freedom for all, particularly women) — an experience each guest could relate to.

They each have been personally traumatized while in Iran themselves. One recalled wedding guests being bussed to the police station for being at mixed-gender party where people were dancing and not wearing hijabs. Another flashed back to being kept out of a college building for having on nail polish. And another remembered how it felt to be stopped by the morality police for wearing her hijab in a way that met standards, but with sunglasses as well — a no-no she wasn’t even aware of and felt was quite random.

“If you talk to any woman who has ever visited or lived in Iran, they have had an experience with the regime’s brutality and inhumanity,” Dashti said. “The control that the state has on the most basic right of a woman, you know, what to wear when you go out, that’s really traumatizing.”

And those laws are as traumatizing as they are unevenly meted out, they said.

“This is the law, but it is also based on people’s interpretation of the law. So one day you might just pass [a morality police officer] and you might be fine. Another day the officer might be like, ‘No, I want to arrest you today because this is not proper enough,’” Family said.

Once Gasht-e Ershad, the so-called morality police, gets involved, all autonomy is lost, the three agreed.

“They force you into a van, then they take you to [to the police station] and your parents are supposed to come and get you after you promised not to do whatever that you did again,” said Missaghi. And that’s even if it is unclear what one had done wrong in the first place, she said.

In the case of Mahsa Zhina Amini, it’s unclear how she died after the morality police cited her for how her hijab was fashioned. It’s also unclear whether she resisted. Although authorities said she died of unrelated causes, the three women learned that there were witnesses to her beating death while she was in police custody.

They hope this revolution will bring about days where women no longer have to live in constant fear based on their apparel.