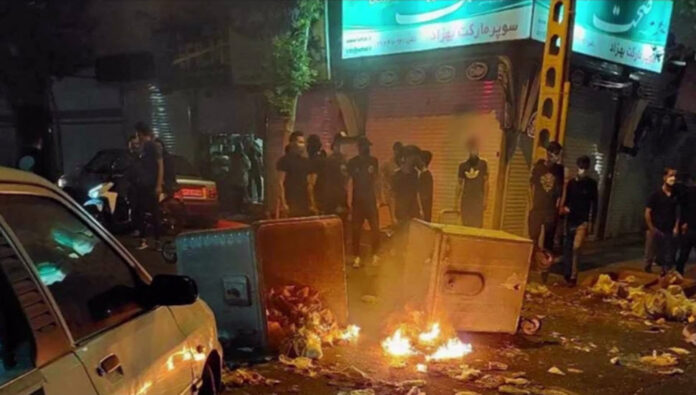 Iran’s nationwide uprising is marking its 90th day on Wednesday following a day of protests in various parts of the country as the public responds with outrage to the recent executions of two arrested protesters, Mohsen Shekari and Majidreza Rahnavard, in less than a week.

Locals in several parts of the capital Tehran, Mashhad being the hometown of Majidreza Rahnavard, and other cities were seen in the streets protesting the mullahs’ rule and these two barbaric executions, both under the mullah-fabricated charges of “Moharebeh,” or “waging war against God.”

Students at several universities in Tehran, Mashhad, and Tabriz, along with protesters in Saqqez being the hometown of Mahsa Amini, high school students in Kamyaran and Ahvaz all protested the regime’s heinous crimes. Brave youths in the city of Shiraz attacked a base of the regime’s paramilitary Basij, affiliated to the Revolutionary Guards (IRGC), using Molotov cocktails.

Protests in Iran have to this day expanded to at least 280 cities. Over 700 people have been killed and more than 30,000 are arrested by the regime’s forces, according to sources of Iranian opposition People’s Mojahedin Organization of Iran (PMOI/MEK). The names of 580 killed protesters have been published by the PMOI/MEK.

Early Wednesday morning local time, protesters in Firuzabad near Shiraz, a major city in south-central Iran, set ablaze a base of the regime’s IRGC paramilitary Basij units. The Basij are utterly loathed in Iran as they are usually the first units deployed to quell popular protests across the country.

In similar measures, protesters torched a pro-regime propaganda poster in the city of Ramsar in northern Iran, attacked the local governor’s office in Shandiz in northern Iran using Molotov cocktails, and attacked a branch of the regime’s Islamic Development Organization in Izeh in southwest Iran.

In Tehran, locals gathered on Wednesday to mark the seventh day of Mohsen Shekari‘s execution by the mullahs’ regime and began chanting anti-regime slogans.

On Wednesday evening protesters in Tehran’s Narmak and Ekbatan districts took to the streets to chant anti-regime slogans and continuing the rallies against the mullahs. They were seen chanting:
“This is the year Seyed Ali (Khamenei) is overthrown!”
“Death to Khamenei!”
“This is the last message: the entire regime is the target!”
“Khamenei is a murderer! His rule is illegitimate!”
“So many years of crimes! Death to the mullahs’ regime!”
“We swear on the blood of our compatriots, including Majidreza Rahnavard and  Mohsen Shekari!” and “Death to the child-killing regime!”

On Tuesday morning, people began gathering in Mashhad to hold a ceremony for Majidreza Rahnavard. Authorities dispatched security units to the site, blocked roads, and even closed the door of a local mosque where people sought to hold their ceremony. The locals gathering for the event began chanting slogans against the regime’s and its oppressive security forces, including: “So many years of crimes! Death to the mullahs’ regime!”

In the city of Shush in Khuzestan Province, southwest Iran, locals gathered to hold a ceremony for Abbas Mansouri, a protester who allegedly committed suicide after being released from prison where he was placed under severe torture.

Schoolgirls in the city of Kamyaran in Kurdistan Province of western Iran took to the streets protesting and chanting: “Khamenei is a murderer! His rule is illegitimate!” High school students in the cities of Shiraz and Ahvaz were also holding similar protest rallies. In Saqqez, the hometown of Mahsa Amini, protesters were in the streets again chanting “Death to the dictator!” referring to Khamenei himself.

On Tuesday night, locals in the Ekbatan district of the Iranian capital began protesting in the streets and chanting: “Our compatriots didn’t die for us to comply with the murderous [Khamenei]!” Similar protests were held by locals in the capital’s Chitgar district.

Iranian opposition coalition NCRI President-elect Maryam Rajavi condemned the regime’s horrific execution of Mohsen Shekari and Majidreza Rahnavard and called on the international community to stand by the Iranian people by taking meaningful actions, while emphasizing the role of the PMOI/MEK network of Resistance Units inside Iran.

“In the face of executions and massacres, which are the primary instruments of the religious dictatorship in Iran, our people’s response can be summed up in Resistance Units, uprisings, and the great army of freedom for the clerical regime’s overthrow,” the NCRI President-elect explained.