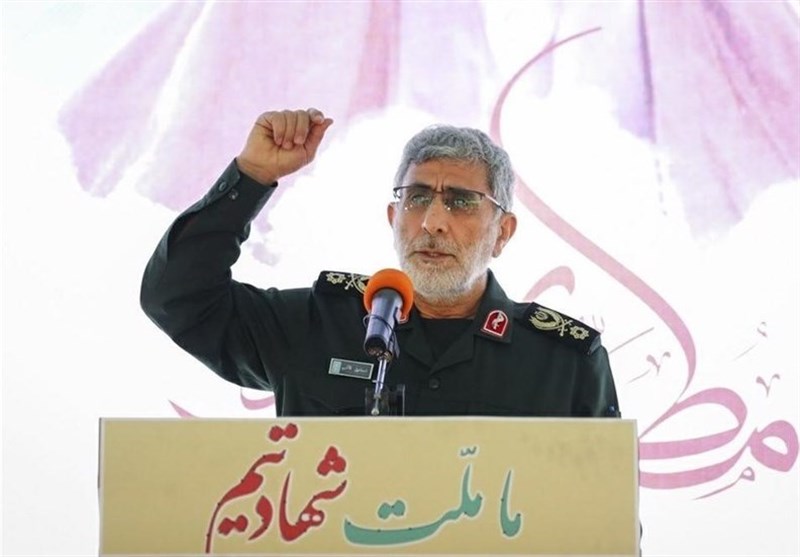 Iran will not leave Palestine alone and will never end its support for Palestinians, no matter how much challenges may intensify and dangers may increase, General Esmaeil Qaani said in messages to senior Hamas and Islamic Jihad movements’ commanders Muhammad Zaif and Akram al-Ajouri.

“We will continue (our support) until the downfall of the occupying regime,” he added.

“You, the Palestinian resistance groups, created a magnificent epic with your steadfastness and proved the enemy’s weakness,” the general said, adding that the resistance forces humiliated the Israeli regime’s army.

“Your capabilities are far greater than the enemy has seen so far and even imagines,” the top commander stressed.

“We have no doubt that we will enter Al-Aqsa Mosque and say prayers there with dignity and strength,” he went on to say.

The message came as the Israeli regime’s “security cabinet” approved what it called “Egypt’s proposal” for a ceasefire amid continued avalanche of retaliatory attacks from the Gaza Strip in response to Tel Aviv’s escalation.

The ceasefire came into effect from 02:00 am on Friday (23:00 GMT on Thursday), according to the regime’s announcement on Thursday.

Senior Hamas official Osama Hamdan also confirmed reports about the potential of the truce, in remarks to Lebanon’s al-Mayadeen television network, saying, “The resistance movement has received guarantees from the mediators that the aggression on Gaza will stop.”

According to NBC News, the Egyptian government — which has in the past been involved in mediatory efforts between the two sides — said the truce would be “mutual and simultaneous.”

The Israeli regime intensified its attacks against Gaza after the coastal sliver rose up in protest in support of the Palestinians in the Israeli-blockaded West Bank, who had come under weeks of significantly violent Israeli assaults.

“Other guarantees have also been received about the expulsion of the occupying regime from al-Quds’ Sheikh Jarrah neighborhood and the al-Aqsa Mosque,” Hamdan added.

The resistance began its reprisal on the exact day as the escalation started and has so far, according to Tel Aviv itself, fired more than 4,000 rockets towards the occupied territories.

The reprisal has swept through the entirety of the occupied lands.

Also on Thursday, it was reported that continued avalanche of retaliatory rockets from the Gaza Strip had imposed a complete shutdown over Ben Gurion International Airport outside Tel Aviv, the Israeli regime’s main air terminal.

Israeli media outlets said the airport was closed off to all inbound and outbound flights. The inbound flights were all redirected to the Ramon Airport located in the Timna Valley in the extreme southern part of the occupied territories.

The rocket attacks also earlier set off sirens throughout the whole “Gaza envelope,” which comprises the illegal Israeli settlements that lie within seven kilometers (4.3 miles) of the coastal sliver.

The Gaza-based resistance movement of Hamas identified the cities of Ashdod and Ashkelon near the enclave’s border with the occupied territories as the latest target of its counterattacks.

The Israeli attacks have killed hundreds in Gaza and scores of others in the West Bank. At least 10 people have, meanwhile, been killed during the resistance’s retaliation.

Reports about the regime’s intention towards a truce came a day after deputy Hamas leader Mousa Abu Marzouq declared victory on the part of the resistance group, and predicted that Tel Aviv would stop its attacks soon.