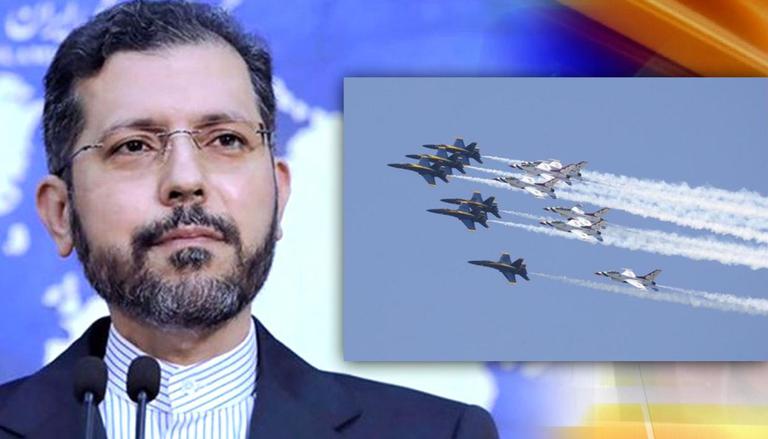 Iran’s Foreign Ministry spokesperson Saeed Khatibzadeh called the US military flight over regional waters “provocative”, as reported by Xinhua. He also slammed Israel stating that “it’s regime is creating a crisis.” The “nature” of Israel has also fuelled growing insecurity and instability, Khatibzadeh asserted during a press conference.

The FM spokesperson’s comments came after Israel, Egypt, Saudi Arabia and Bahrain carried out a joint air force operation with the US on Sunday. The countries flew fighter jets over Iranian regional waters led by US advanced fighter-bomber. The exercise was a part of a joint military exercise across Middle Eastern maritime vital points, including the Strait of Hormuz, South of Iran.

When asked about the allocation of 1.5bn US dollars by Israel to counter Iran’s nuclear program, Khatibzadeh asserted that Tehran has never ruled out threats posed by Tel Aviv. “The nature of (Israel) regime is creating a crisis, and the roots of this regime are growing in insecurity and instability,” Xinhua quoted Khatibzadeh as saying during the week presser. He also added that despite the threats, Tehran is well aware of its “capabilities and limitations.”

Once allies, Washington and Tehran have witnessed a steep escalation of tensions in four decades since the Islamic Revolution. The relations saw new lows after complex politics over the JCPOA nuclear deal asserted “maximum pressure” on Iran from Washington. Beginning in 2019, Iran was accused of breaching obligations under the deal by stockpiling limits of enriched uranium. Moreover, it also suspended the protocol with the International Atomic Energy Agency, keeping off nuclear inspectors from monitoring Iran’s nuclear program, which was additional to the agency standard agreement, World Politics review mentioned.

In 2020, against the backdrop of heightened tensions, an Iran-backed militia attacked US Forces in Iraq. Trump ordered a drone strike in Iran, killing the top military leader General Qassem Soleimani, as he arrived in Baghdad. Both sides, however, withdrew leaving the differences unresolved. Subsequently, several trade sanctions on imports from Iran had also fuelled growing spat between the countries.

While it was expected that the Biden administration revoked several unilateral economic sanctions to support the JCPOA talks earlier this year, the situation has proven to be more taught than expected after hardliner conservative Ebrahim Raisi became Iran’s president in June further creating hurdles in the progress. Meanwhile, as recently as October 29, Iran slammed the US for imposing new economic embargos against several Iranian companies and individuals related to the Islamic Republic’s unmanned aerial vehicles (UAVs) industry.