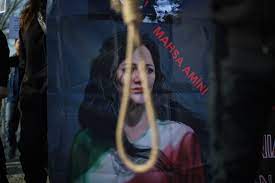 Tehran handed down two death penalty sentences this week to two teenagers who were involved in the nationwide demonstrations protesting the Khamenei regime and who were deemed to have waged “enmity against God” and “corruption on Earth.”

Arshia Takdastan, 18, was sentenced by Iran’s Revolutionary Court in the northern city of Sari Tuesday after being arrested in coastal city of Nowshahr roughly 100 miles west.

The circumstances around his arrest remain vague but Takdastan is said to have participated in a Sept. 21 protest in Nowshahr before being detained.

A source familiar with the trial reportedly told the Human Rights Activists News Agency (HRANA) that “the court issued its verdict based on an accusation that he threw a bottle and a stone at a police car.”

Takdastan was also sentenced to six years in prison for “disrupting security and inciting people to kill each other,” along with “propaganda against the institution,” reported Iran International.

The 18-year-old was also sentenced to two years in prison for “insulting the Supreme Leader.”

It is unclear if he will be required to fulfill his full prison time before his execution.

The ruling on Takdastan came one day after 18-year-old Mehdi Mohammadifard was sentenced to death for participating in a Nowshahr protest on Sept. 30.

An informant told HRANA that his confession was “extracted under torture and ill-treatment.” 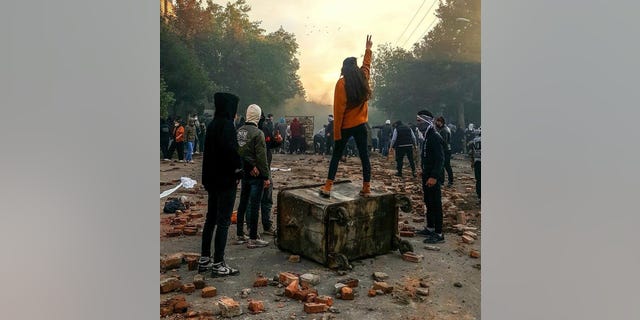 Demonstrators in Iran cry out in the streets. (NCRI)

HRANA said he was also sentenced to six months for “propaganda against the regime,” two years for “inciting people to murder and disrupt national security,” and one year for “insulting the Supreme Leader of Iran.”

Two other men were sentenced to death for their participation in the protests Tuesday.

Some 60 people have been sentenced or face the threat of execution for protesting the regime.

Thousands across Iran hit the streets in protest of the Khamenei regime’s oppressive policies and human rights abuses following the death of 22-year-old Mahsa Amini, who was killed in September while in police custody for wearing her hijab incorrectly.

Tehran harshly cracked down on the protesters and more than 19,000 people have been arrested since mid-September, when demonstrations first broke out, according to tracking by HRANA.

More than 515 protesters have reportedly been killed and over 670 have been convicted for participating in the demonstrations.