Ukraine has been vocal about the purported use of Iranian drones, and the EU is considering sanctions on Tehran.

Tehran, Iran – The Iranian government says it is ready to talk to Ukrainian officials to address allegations that it is arming Russia and plans to ramp up military cooperation with it, as the war in Ukraine nears the end of its eighth month.

In a statement issued late on Tuesday, Iranian foreign ministry spokesman Nasser Kanani reiterated Tehran’s denials about sending drones to Russia to be used in the conflict, and for the first time expressed readiness for “dialogue and negotiation with Ukraine to clear these allegations”.

It came shortly after Ukrainian Foreign Minister Dmytro Kuleba said on Monday he had proposed to President Volodymyr Zelenksyy the formal breaking of diplomatic ties with Iran after Russia’s latest attacks, which killed several people and damaged infrastructure.

Kuleba said the Ukrainian government had no doubts that Iranian Shahed-136 “kamikaze” drones were used in Monday’s attacks, and believed Tehran would possibly continue supplying arms to Moscow. 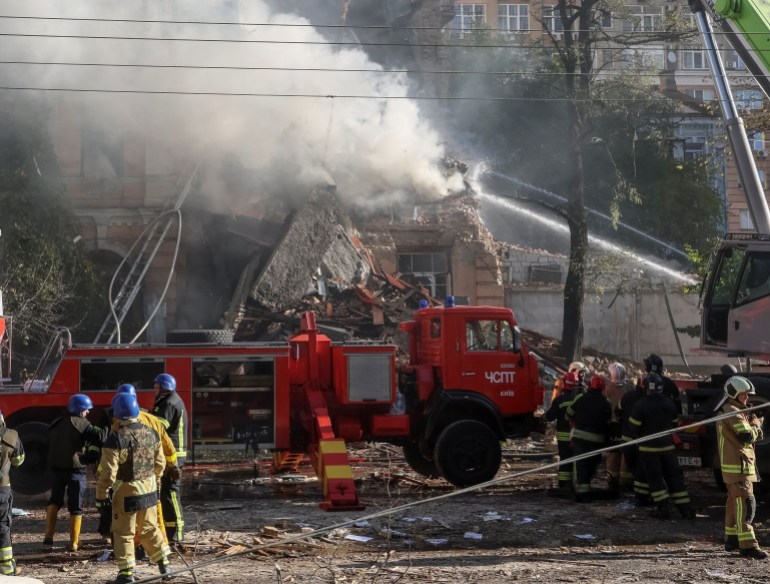 Firefighters work to put out a fire in a residential building destroyed by a Russian drone attack, which local authorities say are Iranian-made Shahed-136s, on October 17, 2022 [Gleb Garanich/Reuters]

Separately, The New York Times on Tuesday cited unnamed US officials as saying that Iran, after selling drones to Russia, had sent trainers from the Islamic Revolutionary Guard Corps (IRGC) to the Russian-annexed Crimea Peninsula to help Russian forces operate them. It followed reports by other Western media that Tehran was preparing to send more drones, in addition to transferring short and medium-range surface-to-surface Fateh and Zolfaghar missiles.

Ukraine accuses Russia of using the Shahed-136, albeit re-branded as Geran-2 with its own tail numbers.

The relatively cheap and fairly accurate drone is able to fly long distances before crashing into its targets with built-in explosives.

Ukraine, which downgraded diplomatic ties with Tehran last month, has been vocal about the purported use of the Iranian drones, with Zelenskyy and his top officials directly blaming them several times for attacks on the capital Kyiv and elsewhere.

“Shahed killer,” wrote Ukraine’s defence ministry in a tweet last week showing the image of a young pilot who had supposedly downed several of the drones.

The Kremlin on Tuesday said that Russian technology with Russian names was “being used” in Ukraine, and referred questions to the defence ministry.

On Monday, Ukraine called on the European Union to impose sanctions on Iran for the alleged arms sales, with Kuleba saying he was prepared to offer evidence. The bloc’s foreign ministers did not take action during a meeting in Luxembourg, but foreign policy chief Josep Borrell said the EU was reviewing evidence at its disposal and would impose new sanctions if it could independently verify arms sales to Russia for the war.

The bloc, however, imposed sanctions on a slew of Iranian officials and entities for what it called “the brutal repression of protests” that erupted across Iran a month ago following the death of 22-year-old Mahsa Amini in the custody of the country’s so-called “morality police”.

While repeatedly denying any arms sales to Moscow for the purpose of being used in Ukraine, Iranian officials have said the country has active “defence cooperation” with Russia, without elaborating.

Iran and Russia are growing increasingly closer, with Iranian foreign minister Hossein Amirabdollahian saying on Tuesday a long-term cooperation agreement that has been in the works since last year will be finalised by the end of the current Iranian calendar year in March 2023.