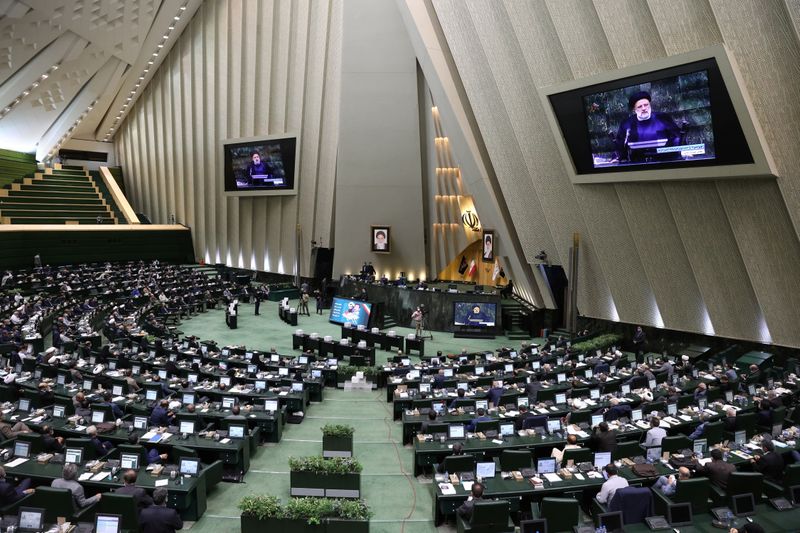 A view shows the parliament floor during a vote of confidence in the cabinet of President Ebrahim Raisi, at the Islamic Consultative Assembly in Tehran, Iran August 25, 2021. Majid Asgaripour/WANA (West Asia News Agency) via REUTERS

DUBAI (Reuters) – Iran’s parliament on Wednesday approved all but one of President Ebrahim Raisi’s big-name nominees for a cabinet of hardliners that will have the task of implementing his plans to ease U.S. sanctions and tackle worsening economic hardship.

Raisi, a hardliner under Western sanctions over allegations of human rights abuses when he was a judge, was sworn into office on Aug. 5 with the Islamic Republic’s clerical establishment facing growing crises at home and abroad.

With economic misery palpable at home, the mid-ranking Shi’ite cleric’s priority will be boosting an economy hobbled since 2018 when Washington exited Iran’s 2015 nuclear deal with six powers and reimposed sanctions that have squeezed Tehran’s oil income and shut it out of the international banking system.

The hardline-dominated parliament approved anti-Western Hossein Amirabdollahian as foreign minister. He is believed to have close ties with Iran’s elite Revolutionary Guards, Lebanon’s powerful Hezbollah movement and other Iranian proxies around the Middle East.

A former ambassador to Bahrain, Amirabdollahian was deputy foreign minister for Arab and African affairs between 2011 and 2016. He was deputy chief of mission at Iran’s embassy in Baghdad from 1997-2001.

To be freed from crippling U.S. sanctions, Iran has been negotiating with world powers since April to revive the nuclear pact that curbed Tehran’s nuclear programme in return for lifting international sanctions.

A sixth round of the talks were held on June 20, with Iranian and Western officials saying major gaps remained to be resolved in returning Tehran and Washington to full compliance with the pact. Iran has violated limits on its enrichment of uranium, a possible pathway to nuclear weapons, since 2019. It has always denied seeking nuclear weapons.

Raisi has backed the talks, but insiders have predicted that his government will adopt a tougher line when they resume. Parties involved in the negotiations have yet to set a date for the next round of negotiations.

Parliament also approved the nomination of Javad Owji, an ex-deputy oil minister and managing director of the state-run gas company, as oil minister. Raisi’s nominee for the education ministry was rejected by lawmakers for issues including lack of experience in the subject.