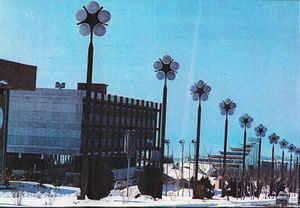 On September 13, 1964, at 5:30 PM, the emperor and queen visited the International Exhibition of Iran, south of the Hilton Hotel, affiliated with the Ministry of Economy. During the visit, Prime Minister Hassan Ali Mansour, several ministers, the Speaker of the Senate and the National Assembly, the Chief of Staff of the Army and the elders of the country were with their wives. During this visit, Her Majesty received the President of the Tehran International Exhibition.

Iran International Exhibitions Company was established in 1342. The administrative organization of the company consists of the general assembly of shareholders, the board of directors and the inspection department.

The second Asian International Trade Fair was held in Tehran on October 13, 1980. A total of 3,000 institutes from 40 countries in Asia, Eastern and Western Europe, Africa, North and South America and Australia participated in the exhibition. More than half a million people visited the exhibition for 20 days. In this exhibition, about 12,400 tons of goods worth 321,316,000 Rials from foreign countries were displayed for everyone.