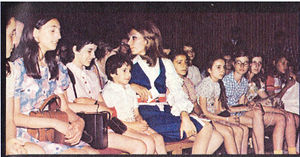 The Center for the Intellectual Development of Children and Adolescents was founded in January 1954 under the high leadership of Empress Farah Pahlavi . The establishment of the center sought to find a way to fill the leisure time of the Iranian adolescent group and provide education and entertainment for them. . [1]

Prior to the establishment of the Children and Adolescents Intellectual Development Center in Iran, there was no special place for children’s literature, and children’s literature included stories that were told to children through oral storytelling; With this center, writers, newspapers, and poets (poets) were widely invited to write children’s and adolescent literature, and the center benefited from the cooperation of countries such as France, the United States, and Hungary (in the field of children’s book painting).

The breeding center is managed by the board of trustees, the board of directors and the managing director. The administrative organization of the center is as follows: administrative affairs, libraries, book printing, cinema, theater, film festival for children and youth, cultural and artistic research, film archive, public relations and logistics affairs and warehouse

The first library of the Center for the Intellectual Development of Children and Adolescents was established in Farah Park, and after that, other libraries were established in Tehran, cities and villages.

The second library in Baghshah opened in Anbar, a primary school. The children were initially unfamiliar with the books and libraries built for them, and gradually became accustomed to reading and the library. By 1978, more than twenty-nine fixed libraries, ten dynamic (mobile) libraries were opened in Tehran, which had more than ten thousand associates (members) and three million references.

Kanoon libraries in Tehran and other cities are not only a place to read and borrow books, but also a place where children and young people can test their awareness, knowledge and test their innovations. The libraries of the center have interesting programs to raise the awareness of Iranian adolescents in various fields. Other programs in the center’s efforts to cultivate the inputs (talents) of children and young people, such as storytelling, acquaintance with newly published books, acquaintance with scientific, artistic and historical figures of Iran and the world, acquaintance with lands, ethnicities, nations and races, film screenings, Discussion and critique programs were developed in various fields, including library books, intelligence and mind training competitions, poetry, chess, various exhibitions, group tours, painting instruction, music and children’s choir instruction, and filmmaking instruction.

Since 1351, music competitions and music students as well as Kanoon theater competitions have been exhibited in Niavaran Park Amphitheater.

Kanoon started its work in Gilan province in 1348 with the construction of eight city libraries. The libraries of the center were opened in the cities of Rasht, Lahijan, Bandar Pahlavi, Ghazian, Rudbar, Fooman, Soomehsara, Katalam, Lasht Nasha, Astaneh Ashrafieh, Kuchesfahan, and Astara. A dynamic urban unit and a dynamic rural unit covered fifty primary and secondary schools on the outskirts of Rasht and sixty-five schools in the city.

In the library of Gilan Children and Adolescents Intellectual Development Center in Rasht, children performed the music of Kuchesfahan, Lasht Nasha and other music of the villages. Exhibitions that spoke about the life of the people of Gilan were always held. In these exhibitions, dolls of men and women of Gilan, women of carp, and rural men of the suburbs of Rasht, and men of Chancho were exhibited.

The first World Festival of Children’s Films was started for children in November 1345 by the order of Empress Farah Pahlavi . In November 1351, the seventh festival was held in Tehran with 120,000 children. This festival has been held in Tehran and other cities since 1350.

Librarian for the Center

In 1349, the Cinema Center of the Center for the Intellectual Development of Children and Adolescents was established, in which young filmmakers and painters began to make films for children. The cinema department tried to promote motivation and construct thought and cultivate an artistic attitude. The achievement of the works of the Children and Adolescents Intellectual Development Center in the brilliance of the films made by the Children and Adolescents Center was shown in the fifth, sixth and seventh festivals of children and adolescents. In the 7th Film Festival in November 1351, the film “Journey” received four awards and the films “Golbaran” and “Siah va Sepid” from the center of Kanoon Cinema received each award. Earlier, the “Liberation in the World” film festival won first prize in Venice and San Francisco. “Boy, Instrument and Bird” also won the Venice Film Festival Award.

Film-making classes for children and adolescents of the Kanoon libraries were established in Tehran. The city of Milan in Italy won the first prize. The Center for the Intellectual Development of Children and Adolescents was a place for famous directors, filmmakers, filmmakers, and animators before 1978, and many of the center’s graduates are now well-known in their field.

Abbas Kiarostami, one of the directors of Iran, was hired by the Cinema Center of the Center for the Intellectual Development of Children and Adolescents. In 1349, he made the short film “Bread and Alley”. In 1351, he released the film “Fun Bell” and in 1974, he was named “Passenger”.

Noureddine Zarrinkolk, the father of Iranian animated films, was one of the founders of the Center for the Intellectual Development of Children and Adolescents.

Bahram Beizai’s works made in the center include “Uncle Sibilo”, short films, “Journey”, “Storm”, “Stranger and Fog” and “Crow”. Amir Naderi added to the value of the center’s work with “Harmonic Film” in 1973. Farshid Mesghali joined the association in 1346 and until 1978 he made animated films, movie posters and drawings for the children’s books of the association, which won numerous awards. Ali Akbar Sadeghi died at the Kanoon Cinema Center by making two films, Golbaran in 1350 and Shah Khorshid in 1353.

In addition to the Film Festival, which was the most prestigious international festival for children, an archive was created to compile films for children and adolescents to begin the screening of valuable art films in a large form for children throughout Iran.

The Children’s Film Archive purchased a number of feature and short films from among the selected films at seven children’s film festivals, and some of them were translated into Persian. These films were shown to young audiences in Tehran and other cities on holidays.