Daei, now a football manager and businessman, said he did it to “be by your side in my homeland and express my sympathy with all the families who have lost loved ones these days” in a post that received two million likes within hours despite a ban on Instagram amid a nationwide throttling of the internet.

Protests erupted across Iran after the September 16 death in custody of Mahsa Amini, a 22-year-old woman who was arrested in Tehran by the morality police for allegedly wearing her hijab improperly.

Daei, who was the world’s top international goal scorer with 109 goals until his record was broken by Cristiano Ronaldo last year, has also expressed support for the protests previously.

“Instead of suppression, violence, arrests and accusing the people of Iran of being rioters, solve their problems,” he wrote on Instagram shortly after the protests began. His post was accompanied by the image of a young woman taking off her headscarf, as many have done during the demonstrations.

The former captain of the Iranian national football team and ex-Bundesliga player was also at odds with authorities last month when he refuted an official claim that a female school student in his hometown of Ardabil had died of pre-existing conditions in a case that officials said was unrelated to the protests despite media reports.

An image of Daei circulated on social media late on Sunday, which appeared to show him in the vicinity of the Dey General Hospital in Tehran, where imprisoned activist Hossein Ronaghi was believed to have been taken after his health deteriorated. Numerous videos online showed protests around the hospital.

Ronaghi was arrested for speaking out against the crackdown on the protests, during which hundreds of people have been arrested and dozens have died. No official casualty figures are available.

The Iranian judiciary subsequently showed an image of Ronaghi in a hospital bed, meeting his mother, and he was later taken back to prison.

The Iranian national team, which finalised its squad late on Sunday, arrived in Qatar on Monday and began training early on Tuesday.

Accompanied by head coach Carlos Queiroz, team members met with President Ebrahim Raisi and other officials in Tehran hours before leaving for the World Cup. 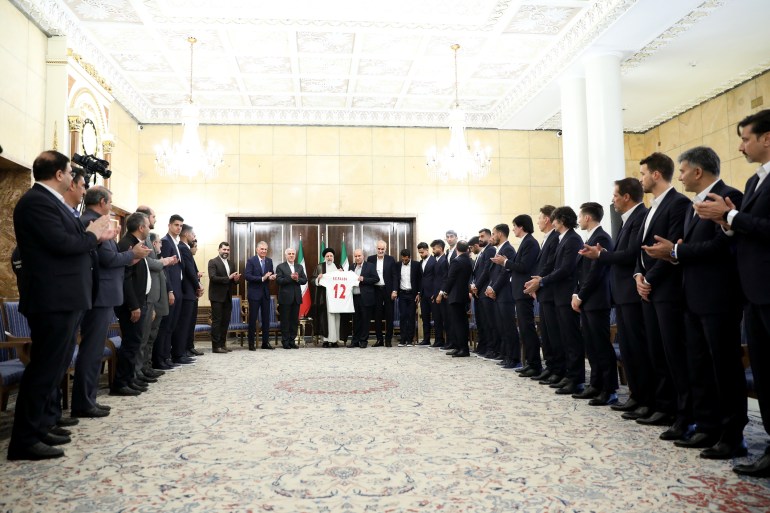 “Some don’t want to see the success and victory of Iranian youth and wish to disturb your focus. Be very vigilant on this,” the president warned them.

Numerous athletes have shown solidarity with the protests. Meanwhile, amid claims that Tehran has armed Russia for the war in Ukraine, activists abroad and in Ukraine have separately called for the exclusion of Team Melli, Iran’s national football team, from the tournament.