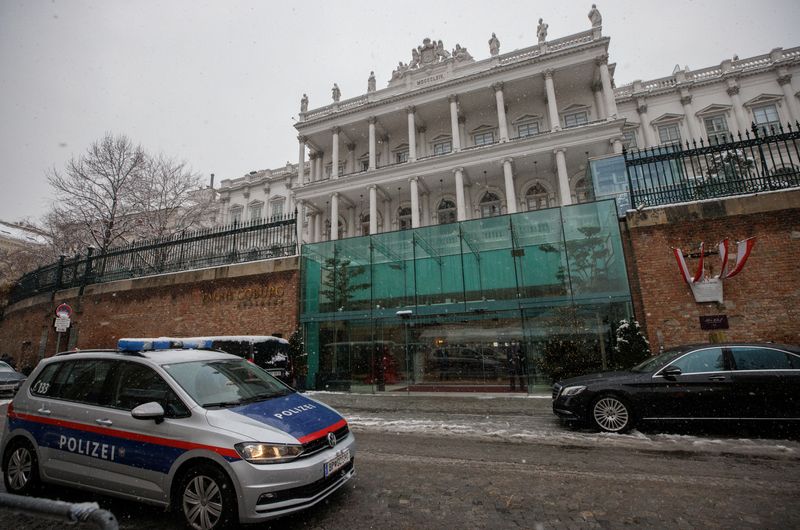 FILE PHOTO: A police car drives past Palais Coburg, the site of a meeting of the Joint Comprehensive Plan of Action (JCPOA), in Vienna, Austria, December 9, 2021. REUTERS/Lisi Niesner

DUBAI (Reuters) – Iran said on Sunday that European countries had failed to offer constructive proposals to help to revive a 2015 nuclear deal, after Britain said there was still time for Tehran to save it but that this was the last chance.

Talks have resumed in Vienna to try to revive the nuclear pact, with both sides trying to gauge the prospects of success after the latest exchanges in the stop-start negotiations.

“European parties fail to come up with any initiatives to resolve differences over the removal of sanctions (on Iran),” Iran’s top negotiator Ali Bagheri Kani said, according to Iran’s state-run Press TV. He was referring to Britain, France and Germany, which are among the major powers trying to salvage the deal.

British Foreign Secretary Liz Truss said earlier on Sunday: “This is the last chance for Iran to come to the negotiating table with a serious resolution to this issue, which has to be agreeing the terms of the JCPOA (nuclear accord).”

“This is their last chance and it is vital that they do so. We will not allow Iran to acquire a nuclear weapon,” Truss said.

Germany said on Saturday that time was running out to find a way to revive a 2015 nuclear accord.

Speaking after meetings with her counterparts from G7 countries in Liverpool, German Foreign Minister Annalena Baerbock said Iran had resumed the talks with a position that set the negotiations back six months.

Under an original deal that then-U.S. President Donald Trump abandoned in 2018, Iran limited its nuclear programme in return for relief from U.S., European Union and U.N. sanctions.

The current round of talks in Vienna follow a pause of five months after the election of hardliner Ebrahim Raisi as Iran’s president.

Iranian officials have previously said they were sticking to their tough stance.

Raisi said on Saturday that Tehran was serious in its nuclear talks in Vienna.