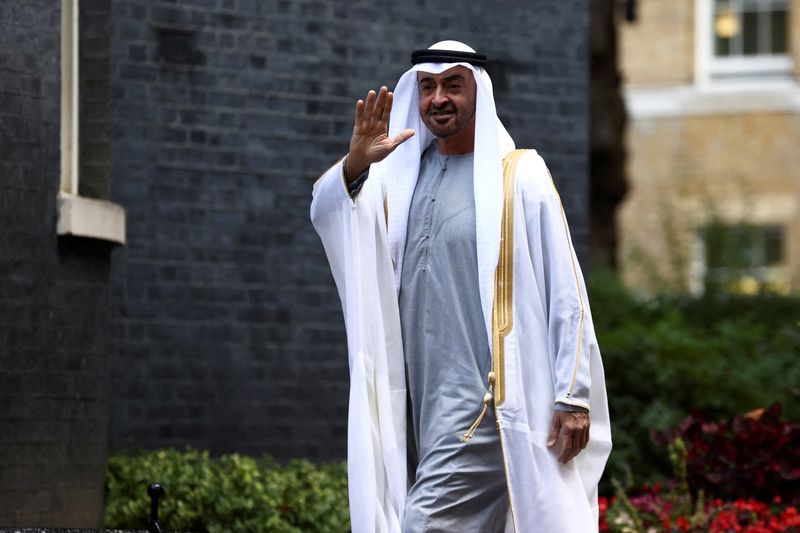 DUBAI (Reuters) – The United Arab Emirates is walking a diplomatic high wire between superpower ally Washington, new friend Israel and old adversary Iran as it seeks to avoid a costly regional conflict that could torpedo its trade and tourism ambitions.

Abu Dhabi hosts Israel’s prime minister this week and will receive a U.S. delegation seeking to warn companies in the UAE about compliance with sanctions on Iran over its nuclear activities. The Gulf state also dispatched a senior official to Tehran last week in a bid to mend ties and contain tensions.

The whirl of diplomacy marks a shift in foreign policy approach for the UAE, which is retreating from military adventurism after having waded into a series of damaging conflicts over the past decade, from Yemen to Libya, according to Emirati officials, analysts and regional diplomats.

“We need to avoid a major conflict that will embroil the United States or indeed the countries in the region,” senior UAE official Anwar Gargash told a U.S.-based think-tank on Thursday. “Our interest is to try and avoid it at all costs.”

The United States and Israel have recently increased rhetorical pressure on Iran about possible economic or military consequences should efforts to salvage a 2015 nuclear pact fail.

World powers are trying to bring both Washington and Tehran back into full compliance with the pact, which then-President Donald Trump quit in 2018. He re-imposed sanctions, prompting Tehran to gradually violate the nuclear limits of the 2015 deal.

Abu Dhabi, which forged ties with Israel last year, shares U.S. and Israeli concerns about Iran’s nuclear ambitions along with its missiles programme and regional proxies. But it is trying to balance curtailing Iran with protecting its economic interests as a tourism and commercial hub post COVID-19 in the face of increasing economic competition in the region.

“It is time to de-escalate, not escalate. If Israel is in this mood, we are not going to share it,” said UAE political analyst Abdulkhaleq Abdulla.

Gargash, diplomatic adviser to the UAE president, told the Arab Gulf States Institute that neither the region nor Washington want another conflict like Iraq or Afghanistan.

Iran rejects Western suspicions that it is seeking atomic weapons, saying its nuclear activities are for civilian energy purposes. It says it abided by the terms of the 2015 deal in good faith, and wants all sanctions imposed by the United States after Trump abandoned the deal to be lifted.

The UAE and Saudi Arabia, while pressing global powers to address Iran’s missile programme and regional behaviour, are wary of a repeat of 2019 attacks on tankers in Gulf waters and on Saudi oil facilities that forced the kingdom to temporarily shut down more than half its crude output.

The UAE “needs to hedge as best as it can to offset Iranian punitive actions, but there can be no doubt that its relationship with the U.S. is absolute priority,” said Neil Quilliam, associate fellow at Chatham House.

Gulf nations rely heavily on the United States for security but there is deepening uncertainty over the U.S. regional role. Israel has broached setting up joint defences with Gulf states following normalisation of ties with the UAE and Bahrain.

The UAE signed a $23 billion deal at the tail end of the Trump presidency to buy American-made F-35 fighter jets, drones and other defence equipment. But the sales progress has since slowed amid U.S. concerns over UAE ties with China, a major Emirati trade partner.

Gargash said the UAE had recently halted work on Chinese facilities at an Emirati port after Washington voiced concern that they had military purposes.

The UAE, Gargash said, wants to find a “common economic denominator” to improve ties with Iran, Turkey and Syria, even as Abu Dhabi builds on relations forged with Israel.

In a sign Washington is cranking up economic pressure on Iran, Treasury official Andrea Gacki is due to visit the UAE as part of a delegation on Monday for what the State Department said were discussions with private sector firms and financial institutions that “facilitate non-compliant Iranian commerce”.

The UAE, long one of Iran’s main links to the outside world with business ties stretching back a century, saw its exports with Iran shrink from $14 billion in 2017 to $7 billion in 2019 according to World Bank data. Flows have started to recover.

Analyst Abdulla said there was no appetite in the UAE for further economic penalties on Iran.

“We have done our job and done our share of compliance in the past five, six years,” he added. “But enough is enough. Nobody is in the mood in Abu Dhabi to go for more sanctions. That is very clear.”