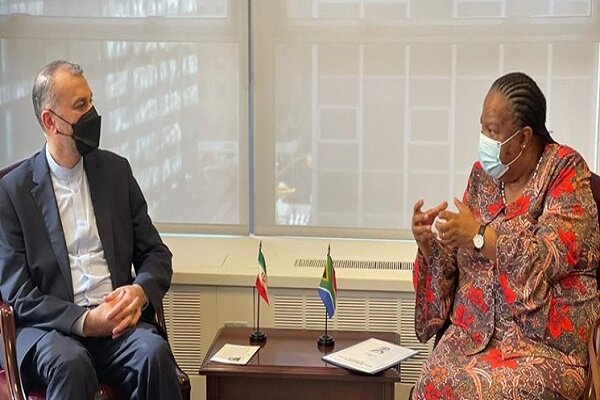 Stressing the importance of the African continent in the foreign policy of the Islamic Republic of Iran, Amir-Abdollahian emphasized the Iranian government’s resolve to develop relations with this continent, especially with South Africa.

He also added that Iran is ready to strengthen cooperation in areas of mutual interest to both Iranian and South African parties.

Turning to the issue of Palestine, the top Iranian diplomat appreciated South Africa’s stance on the Palestinian issue and its policy of supporting the oppressed Palestinian people.

Regarding the ongoing war in Ukraine, Amir-Abdollahian stated, “We continue our efforts to establish a ceasefire in Ukraine, and our principled position is to oppose war and end the crisis in Ukraine through political means.”

Naledi Pandor, for her part, Pointed to the important position of the Islamic Republic of Iran and its important capacities and appreciated the efforts to hold the new round of the Joint Economic Commission of the two countries.

She also emphasized the importance of implementing the agreements of the Joint Commission.

While pointing to the important role of the Islamic Republic of Iran in mediating the Ukraine crisis, South Africa’s foreign minister stressed, “The ceasefire is important for all parties and the international community, because the consequences of this war have caused a food and energy crisis in some countries, and we hope that the concerns of Russia and Ukraine will be resolved through negotiations.”

She also expressed hope that Iran’s nuclear negotiations will be concluded at the earliest time.

The top South African diplomat also invited the Iranian President to visit her country on behalf of the President of South Africa.