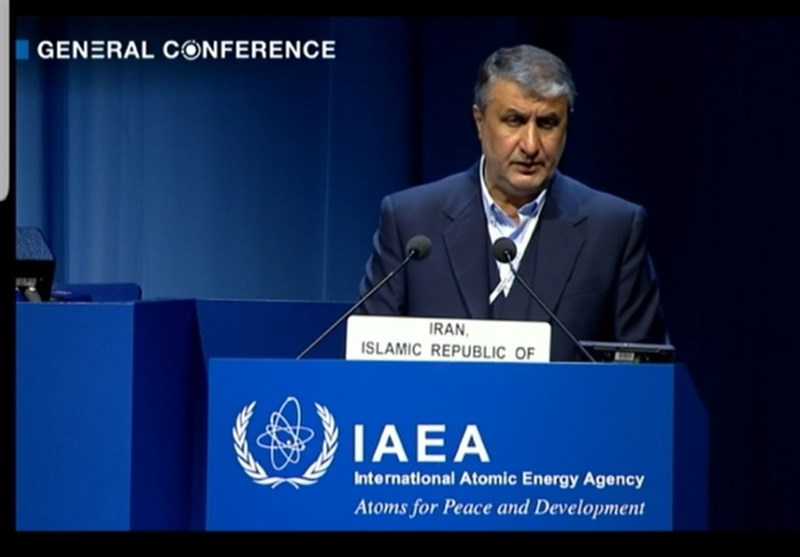 TEHRAN (Tasnim) – Head of the Atomic Energy Organization of Iran (AEOI) called on the International Atomic Energy Agency to behave professionally, impartially and independently, and prevent certain elements from raising time-worn anti-Iran accusations whose case has already been settled.

Addressing the 66th annual regular session of the IAEA General Conference in Vienna on Monday, Mohammad Eslami highlighted Iran’s “exemplary” cooperation with the UN nuclear agency and its support for the full and non-discriminatory implementation of the Non-Proliferation Treaty (NPT) and the comprehensive safeguards agreements.

“I would like to make it clear that there are no undeclared nuclear activities or materials in Iran, and all (anti-Iran) allegations are only based on the usurping Israeli regime’s fabricated and incorrect information. The Islamic Republic of Iran truly expects the IAEA to make reports and conduct the supervision and verification activities professionally, impartially and more independently,” the Iranian nuclear chief added.

In order to protect its credibility and integrity, the IAEA must prevent certain elements from leveling the outdated allegations against Iran which have been dismissed in 2015, Eslami noted, saying such hackneyed accusations should not be allowed to resurface under various pretexts.

“We believe that the IAEA should avoid relying on baseless information through unreliable sources and must follow a robust verification system,” he underscored.

Eslami finally emphasized that the illegal sanctions imposed on bogus pretexts against the Iranian nation must be lifted, noting that Iran is always prepared for dialogue and interaction.

During his stay in New York for the UN General Assembly, Iranian President Ebrahim Raisi said the cases that the IAEA is considering against Iran, including the issues relating to the Safeguards Agreement, must be dropped so that they won’t be used as a leverage for pressures on Tehran.

Raisi stated, “The International Atomic Energy Agency has so far emphasized 15 times that the nuclear activities of the Islamic Republic of Iran are peaceful and do not deviate from the Agency’s regulations. Are these reports invalid for Western countries?”

In response to a statement that the IAEA is an independent and non-political institution, Raisi said, “In the same region where Iran is located, how many other countries have nuclear activities and even activities related to the production of nuclear weapons? How much of their activities are under the supervision of the IAEA, and even though they are making nuclear weapons, neither the IAEA nor some countries in the world are sensitive to them.”