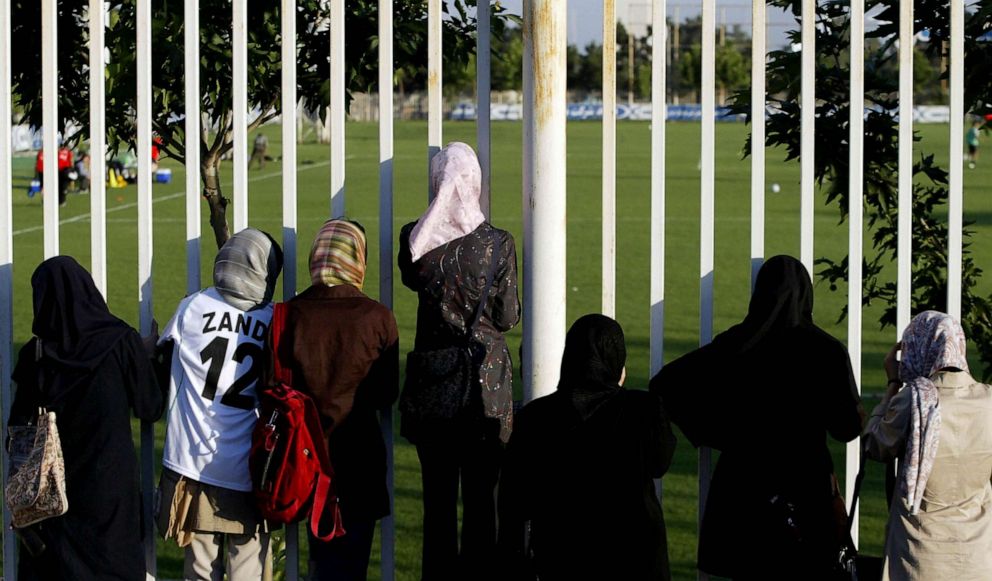 Iranian women were banned from the national soccer stadium and all live soccer games for more than 40 years, but that didn’t stop some women from defying the mandate.

Peabody Award-winning host and executive producer Shima Oliaee sat down with ABC News Live’s Phil Lipof to talk about bringing the fight toward freedom to life, her own personal identity as the daughter of her soccer-loving Iranian mom and how it all connects to the ongoing protests in Iran for women’s rights.

LIPOF: Shima, thank you so much for being here. We really appreciate it. Iranian women have been banned from watching soccer inside that stadium, we’re told, to allegedly prevent them from temptation of men’s bare legs. How did Iran’s national soccer stadium turn into a battleground for women’s rights?

OLIAEE: As soon as [former Supreme Leader Ruhollah] Khomeini came into power, basically, all of their legal rights started being stripped one by one. And by 1981, every woman was fully veiled. They went from very Parisian-like outfits, short miniskirts. My mom said she was protesting in a miniskirt in ‘79 as a freshman in college. And it went from that to full, thick black pants, long-sleeved shirts and a full hijab or chador by the time we get to 1981.

And women were still allowed in the stadium at the time, which they’d never been banned from. They go to the national soccer stadium, Azadi Stadium. At the time it was called Aryamehr. And the guards at the gate tell them they are no longer allowed inside the stadium, that they’ve been banned from all live soccer games. The guards laughed and said, ‘Actually, on top of this, this national stadium has been renamed. It’s called Azadi Stadium. That means Freedom Stadium, and you will never be allowed inside again.’ And for 40 years that remained true.

LIPOF: I find it interesting the podcast follows four decades of experiences of different women impacted by the ban. Why four decades?

OLIAEE: What I noticed was, in the ’80s, there was a certain way that women kept hope alive, and that was also during the Iraq-Iran war, and that was in secret spaces. It wasn’t in public spaces.

But by the ’90s, and this critical game that actually happens that we describe in the series, it’s a World Cup qualifying match between Australia and Iran. The entire country explodes with joy and women are part of it. So it’s the first time in the ’90s that you see women do things that are illegal for them to do and they break into Azadi Stadium and rip off their hijabs.

LIPOF: You also choose to showcase your personal experiences, being an Iranian-American. Let’s take a look.

OLIAEE, speaking on podcast: “I often felt like that — split in two. At school, I was ashamed of telling people where my family was from. It’s not like I was fully aware of what was happening in the world — what the Gulf War was, the Iranian hostage crisis. But growing up in the ’90s in Reno, Nevada, I knew being from the Middle East wasn’t something to be excited about.”

LIPOF. There are so many ways to tell a story. You know this. Why did you feel it was important to share your own personal experience?

OLIAEE: All the Iranian women in my family were the most intimidating people in my family. So I kind of didn’t understand why, in Western media, I was seeing a lot of repressed images of women in the Middle East. And also what I would see —

Yeah, that’s my mom coming back from a coed match. Look at her! Oh my gosh, she’s so funny. Look at her! She’s like, ‘I just scored a goal.’ She’s bragging about her great — Oh my gosh. Yeah, she was MVP on her team. She let me know that.

LIPOF: Something to be proud of.

But yeah, she loved soccer. She wouldn’t talk about the trauma from Iran. She would talk about soccer. And I saw all these strong Iranian women in my family. And when I would look to Western media to understand where I came from, I would see a lot of screaming men with beards and really bad eyebrows.

There was an image that had seeped into me as an American. I had misconceptions, and I actually wanted to replace the sounds of screaming men that were kind of seared into our brain through the hostage crisis with —

LIPOF: Pictures of your mom in her uniform.

OLIAEE: With my mom freaking out about her soccer game. I mean, in the last episode, she literally cannot focus on the revolution that’s happening right now, because she’s about to win her match.

So with that, the sound of joy. And all three generations of women that I interviewed who basically defied the regime, defied death in order to even speak about what had been happening the last 20 years. They shared their joy.

LIPOF: Just before we go, you talked about executions. And right now, there are people being executed. There are people who are going to be executed. How do you think the world should be reacting to what’s happening in Iran?

OLIAEE: I mean, this is what’s so hard. It’s so easy to turn away and distract ourselves from what’s happening. I think this is what I really want people to get from the podcast. When you hear this series, what you see is that the same tactics of the regime have been used for 40 years.

They lie, too. They say, ‘Oh, we’re not executing. Oh, we’ve banned the moral police.’ All of these other stories have come out in the last several weeks as these protests have taken over Iran.

And I think the lessons that the women learned are crucial lessons for women in every country. There’s so many ways that we can learn about what not to do and also what we need to do. And I hope that that’s what this series brings, is a little bit of clarity and wisdom for today — and courage.