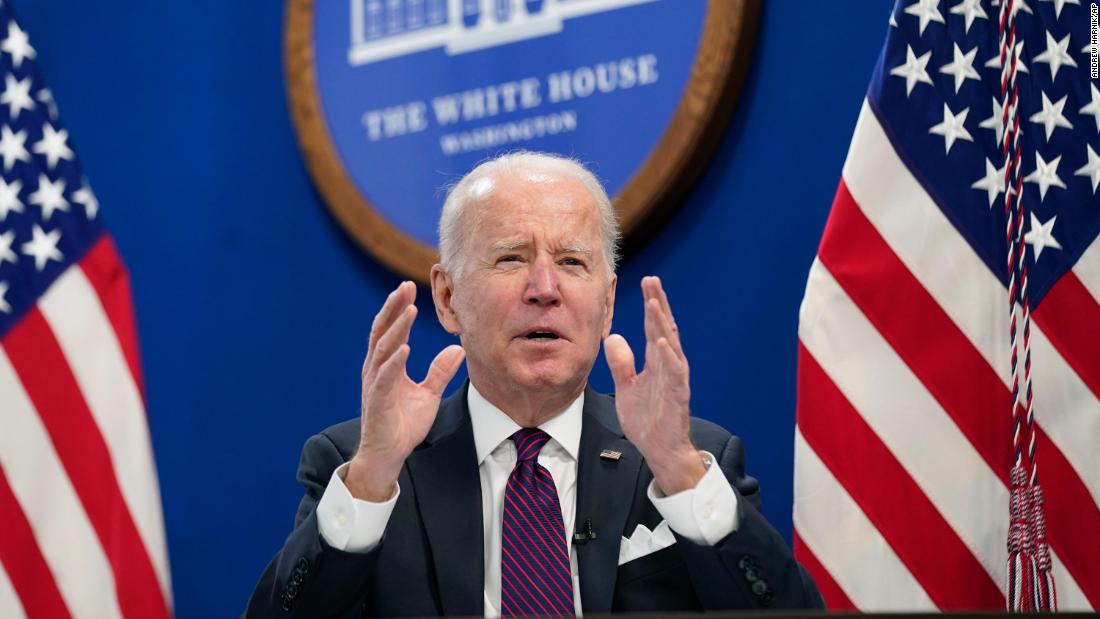 After one year, the reviews from the American people in public polling on those topics, in many cases, have not been kind.
Biden won’t face the voters again until 2024, the ultimate judgment on what the American people think of the job he’s done in office. But to get a benchmark on how Americans are feeling on the issues closest to them, CNN analyzed recent polling in subject areas that were the most important to Americans in January 2021, when Biden took office.
The President has faced a variety of unique public health, diplomatic and economic obstacles. He’s also claimed victories, including a drop in the unemployment rate, ramped up Covid-19 vaccinations and the passage of two major legislative priorities.
But while the administration has boasted of all they’ve done to improve the country over the last year, public perception hasn’t followed suit.
Just 41% of Americans approve of the way Biden’s handling his job while 54% disapprove, according to the latest CNN Poll of Polls.
On Wednesday, Biden acknowledged the need to reach out to Americans ahead of the midterm elections in November, vowing to spend year two speaking with the public and making the case for “what we’ve already done, why it’s important, and … what will happen if they support what else I want to do.”

Jobs and the economy

In his first year in office, Biden took a number of steps intended to bolster the economy and create jobs, including the signing of the American Rescue Plan and the bipartisan infrastructure law.
But as the pandemic has dragged on into its third calendar year, the President has faced challenges trying to ameliorate supply chain issues and inflation, labor shortages and volatile stocks have affected American consumers.
A December 2021 CNN/SSRS poll shows Biden comes into his second year with a 44% approval rating to 55% disapproval rating among registered voters on his economic performance. This makes for a -9 point net approval rating. The average of all polls taken in December is quite similar with Biden at -13 points on the economy.
The average president at that point in the last 44 years (since we have been polling on the topic) had a net economic approval rating of +5 points. That means Biden’s is 18 points worse than the average.
In a December NPR/Marist poll, most who received either stimulus payments or who received the expanded child tax credit that began last summer said those payments helped just a little or not at all.
A December CNN survey found 54% said they disapproved of the job Biden was doing helping the middle class.
The pandemic’s public health and economic challenges dominated Biden’s first-year agenda.
The Biden administration undertook a number of major efforts to address Covid-19, such as ramping up vaccine manufacturing and distribution, purchasing and deploying vaccines abroad and purchasing major quantities of anti-viral treatments.
But there have also been missteps.
In recent months, for example, the Biden administration has taken heat for Covid-19 testing shortages that occurred when the Omicron variant led to a new wave in cases this winter. At the end of December, Biden conceded that not enough had been done to expand testing capacity. And now, as the wave appears to be on the cusp of subsiding, new efforts to distribute masks nationwide and half a billion rapid tests via mail are just rolling out.
A Monmouth University poll in December found that 60% of adults feel worn out by the changes they’ve had to make in their daily lives due to Covid-19, and that the share who feel Biden is doing a good job of dealing with the coronavirus has dropped to 46%, below 50% for the first time in Monmouth’s polling. Biden’s ratings for handling Covid-19 have generally been better than his overall approval rating.

Biden entered office declaring that America was returning to the world stage by reentering global agreements, like the Paris Climate Accords, and reestablishing close ties with American allied nations.
But there were challenges, including the messy US withdrawal from Afghanistan, tensions with Russia and China, as well as and a major diplomatic kerfuffle with France over nuclear submarines.
According to a CBS Poll released earlier this week, 62% of adults disapproved of the way Biden is handling Afghanistan. On those tensions with Russia and China, Biden receives slightly better marks but is still under water — 55% disapprove of his handling of issues with Russia and 59% disapprove of his handling of issues with China.
And a Pew Research Center survey in June found that in each of the 16 foreign nations they polled, more than 6 in 10 expressed confidence in Biden to do the right thing in world affairs. Twelve nations surveyed by Pew in both 2020 and 2021 showed a median of 75% expressing confidence in Biden, compared to 17% for then-President Donald Trump in 2020.

The President came into office calling for national unity, following the violent insurrection at the US Capitol by pro-Trump rioters attempting to overturn the results of the 2020 presidential election. Biden also spent his first year expressing the importance of compromise, using his infrastructure law as a prime example for how Republicans and Democrats can achieve major feats when they work together.
But a Pew Research Center analysis from November found that political polarization among Americans remains dominant, and that Republicans and Democrats agree on very little. And even within their own parties, they face sharp divisions.
The Associated Press-NORC poll released Thursday showed only 16% of US adults felt the country was much more or somewhat more united, as compared to 43% who said much more or somewhat more divided. Forty-two percent of those polled said things were neither more united or divided under Biden.
Views on Biden are also sharply divided along party lines. Earlier this week, Gallup found that political party polarization in its presidential approval ratings is at its highest for any first-year president.