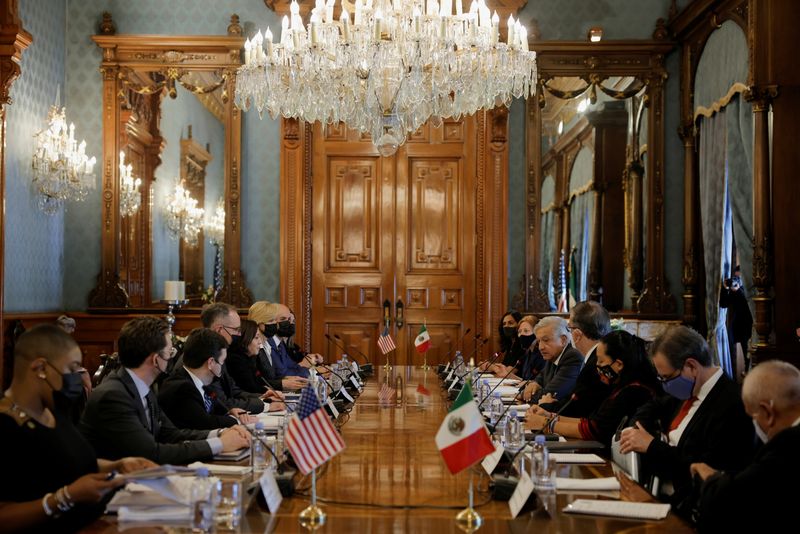 Harris and Lopez Obrador witnessed the signing of a memorandum of understanding about the work the two countries’ development agencies do in Central America. They then met for talks billed as focused on “root causes” of migration.

“I strongly believe that we are embarking on a new era that makes clear the interdependence and interconnection between nations,” Harris said at the start of the meeting.

Mexican Foreign Minister Marcelo Ebrard wrote on Twitter after the meeting concluded that the discussion had been “very successful.”

The economy, security cooperation and development in southern Mexico and Central America were addressed, Ebrard said.

Lopez Obrador, who built a working relationship with Donald Trump despite the former U.S. president’s economic threats and insults against Mexico over migration, said his government was very interested in maintaining good relations with Washington.

The administration of President Joe Biden has been struggling with the number of migrant children and families arriving at the U.S.-Mexico border, mainly from Central America.

Since Biden took office in January, the number of migrants taken into custody per month at the border has risen to the highest levels in 20 years.

The administration sees Mexico as an important partner both on slowing the flow and on working on development in Central America, where relations between national governments and Washington are increasingly fraught.

It was not immediately clear if Harris used the meeting to push Mexico to further intensify efforts to detain migrants.

Harris spokeswoman and senior adviser Symone Sanders said on Monday the two sides would discuss stepping up enforcement. However, Ebrard said they would not.

“We are not going to talk about operations or other things,” Ebrard said earlier on Tuesday.

“What is going to be the focus of attention today is how we can promote development in the short term in these three countries,” Ebrard said, referring to El Salvador, Guatemala and Honduras. Temporary work visas would be on the agenda, he said.

Mexico detained 91,000 illegal migrants in the five months of the year, immigration authorities said on Monday, with minors making up a fifth of all detentions. Some members of the Biden administration think Mexico could do more.

Harris, tasked by Biden to help stabilize Central America, has promised an additional $310 million in aid to soothe the impact of the pandemic and hurricanes last year in the region.

Mexico has implemented domestic cash-for-tree-planting and youth unemployment benefit programs to El Salvador and Honduras on a limited scale and plans to add Guatemala, Ebrard said on Tuesday before the Harris meeting.

On Monday, Harris met with Guatemalan President Alejandro Giammattei and said the two leaders had “robust” talks on fighting corruption to deter migration from Central America.

At that meeting, Harris told potential migrants “Do not come,” to the United States, a blunt statement that immigration advocates said went against the spirit of the administration’s commitment to a more humane approach to managing migration.