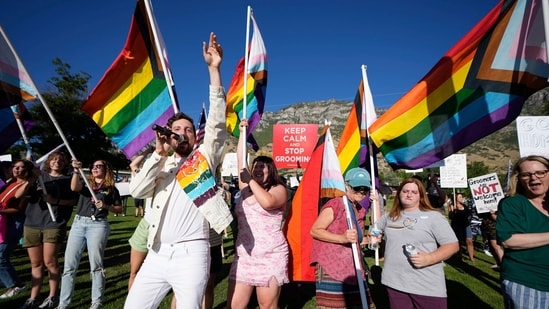 France on Wednesday condemned the death sentences issued by Iran against two female gay rights activists on charges of promoting homosexuality, in unusual verdicts that have alarmed campaigners.

The two women, Zahra Sedighi Hamedani, 31, and Elham Chubdar, 24, were sentenced to death by the court in the northwestern town of Urmia, according to rights groups.

They were convicted of “spreading corruption on earth” — a charge frequently imposed on defendants deemed to have broken the country’s sharia laws, the Hengaw Kurdish rights organisation said.

“France deplores the death sentences issued by Iran for Mrs Elham Chubdar and Mrs Zahra Sedighi Hamedani,” the French foreign ministry said in a statement, emphasising its universal opposition to the death penalty and support of gay rights.

The sentences are highly unusual verdicts to be issued over homosexuality and activists say they cannot recall a previous case of execution being ordered for a woman over their sexuality in Iran.

Amnesty International said it was “outraged” by the verdicts and expressed concern that their convictions and sentences were discriminatory in nature.

The Norway-based Iran Human Rights NGO said in a statement that “their lives can be saved by immediate and strong reactions by the international community and civil society”.

There has for months been concern about the fate of Sedighi Hamedani, also known as Sareh, a prominent Iranian LGBTQ activist.

She was arrested in October by Iranian security forces while trying to flee into neighbouring Turkey after returning to Iran from Iraqi Kurdistan, where she had been based.

Homosexuality is banned in Iran with its penal code explicitly criminalising same-sex sexual behaviour for both men and women.

Before leaving Iraqi Kurdistan, Sedighi Hamedani had sent gay rights group 6Rang videos to be made public in case she failed to make it to safety.

“We, the LGBTI community, are suffering. Whether through death or freedom, we will remain true to ourselves,” she said in one of the videos.

“I hope to achieve freedom,” she added, also alleging that she had been tortured with methods including electrocution while in Iraqi Kurdish custody.

Activists accuse Iran of being in the throes of a major crackdown that is affecting all areas of society, including a new push against the Bahai religious minority, a surge in executions and arrests of foreign nationals.