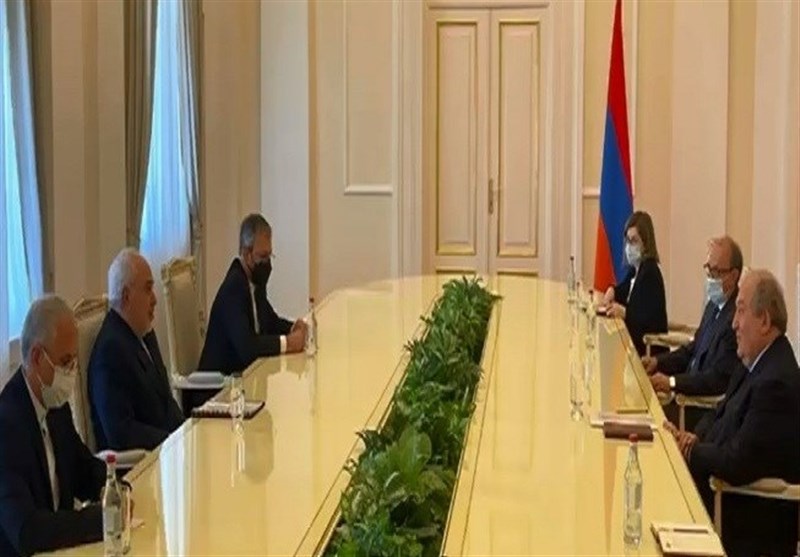 Iranian Foreign Minister Mohammad Javad Zarif in a meeting with Armenian President Armen Sarksyan reaffirmed the country’s commitment to peace and stability in the region.

During the Wednesday meeting held at the end of his short trip to Yerevan, the Iranian Foreign Minister highlighted the friendly and historical relations between the two nations.

He also expressed Iran’s preparedness to contribute to efforts at settlement of differences between neighboring countries, and once again underlined the significance of maintaining the territorial integrity of regional countries and respecting the international law.

The Armenian president, in turn, stressed that his country considers Iran a reliable partner and friend, and underlined the huge significance of deepening bilateral relations between Tehran and Yerevan.

In this meeting, the two sides also highlighted the necessity of tapping into the existing capacities for expanding Iran-Armenia relations.

He expressed hope for deeper economic relations between the two countries in the post-pandemic era and said development of Meghri Border Free Trade Zone and launch of Iran-Nakhchivan-Armenia rail link lay the ground for expansion of mutual economic ties.

The top diplomat also expressed hope Iran will be able to play an effective role in Armenia’s Syunik Province and this will help further strengthen ties with Yerevan.

The foreign minister noted that Iran is willing to see stability maintained in the region and Armenia’s territorial integrity guaranteed, and expressed regret over tensions in Armenia’s borders with the Azerbaijan Republic over the past days.

Armenia’s caretaker prime minister, in turn, said Yerevan considers ties with Iran of strategic significance, saying he is pleased about the fact that his country’s border with Iran has always marked friendship and security for both sides.

Pashinyan also touched on the steps Armenia has taken to develop its Syunik Province, including a push to speed up the establishment of Meghri Free Trade Zone, expressing hope these measures will lead to expansion of ties with Iran.

During the meeting, Zarif and Pashinyan also discussed the natural gas and electricity swap plan between the two countries, extension of a contract for exports of Iranian natural gas to Armenia and an increase in the amount of exported natural gas as well as cooperation on infrastructure, science and education.