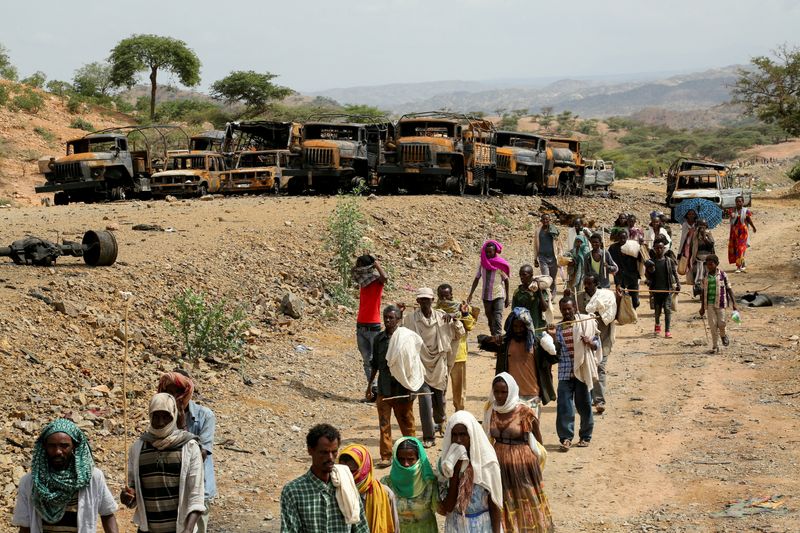 WHO director general Tedros Adhanom Ghebreyesus, who previously served as the Ethiopian health minister and foreign minister, said earlier this week that aid was being blocked from getting through to his home region of Tigray, where rebellious forces are fighting the central government.

“Tedros Adhanom’s moral, legal and professional standing that threatened WHO’s organisational standing,” Ethiopia said in a statement late on Thursday. “He has spread harmful misinformation and compromised WHO’s reputation, independence, credibility which is evident from his social media postings.”

The WHO did not immediately respond to a request for comment.

Ethiopia’s army chief has previously accused https://www.reuters.com/article/us-ethiopia-conflict-who-idUSKBN27Z13Z Tedros of trying to procure arms and diplomatic backing for the rebellious forces of the Tigray People’s Liberation Front (TPLF). He denied that.

Thousands have been killed in the conflict in Tigray, which spread to two neighbouring regions in northern Ethiopia before Tigrayan forces were forced to withdraw back to Tigray in December.

The U.N. says the government is operating a de facto blockade of humanitarian aid to Tigray; no trucks have entered the region since Dec. 15. More than 90% of the population needs food aid and doctors told Reuters last week that many people – including malnourished children – are dying because no medicine has been permitted to enter Tigray.

On Thursday, Tedros tweeted “People in #Tigray #Ethiopia, living under de facto blockade for over a year, are dying from lack of medicine & food, & repeated drone attacks. @WHO & partners call for safe, unimpeded access to deliver humanitarian aid to the millions of people in great need.”

The government has denied blocking aid and accused the TPLF of requisitioning trucks sent in previously.

Ethiopia’s foreign ministry said Tedros failed to show integrity and professionalism and was a member of the TPLF, which dominated Ethiopian politics for nearly 30 years before Prime Minister Abiy Ahmed’s 2018 appointment.

“Tedros encourages the TPLF in his media engagements and celebrates what is presumed to be a military success of the group, besides engaging in selective outrage where he discriminately addresses the humanitarian concerns in Ethiopia,” the ministry said.

The government designated TPLF a terrorist group after the war erupted in November 2020. Tedros, a Tigrayan, was a member of the TPLF. Abiy also served as an intelligence chief under the previous TPLF-led government.

The latest criticism follows two difficult years for Tedros as he led the world through a global pandemic and faced attacks https://www.reuters.com/article/us-health-coronavirus-who-idUSKCN2242TW from former U.S. President Donald Trump, who withheld https://www.reuters.com/article/us-health-coronavirus-trump-who-idUSKBN2352YJ WHO funding over accusations Tedros did not sufficiently challenge China over the origins of COVID-19.

Tedros was elected the WHO’s first African director-general in May 2017 with strong Ethiopian and African support. He ran again as the sole nominee in October. Ethiopia withheld its support and 28 other countries appointed Tedros for a second five-year term.