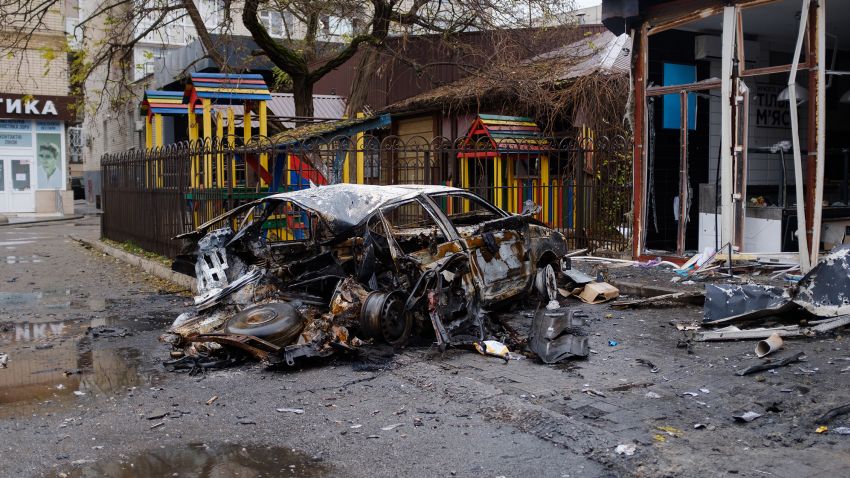 Share
Tweet
Share
Share
Email
Comments
Kherson, Ukraine — A pool of blood-stained water and the charred wreckage of a car mark the spot in Kherson where Russian shells tore into this city Thursday, killing four, according to local officials, and shattering any sense of calm.

Russian President Vladimir Putin claims he’s annexed this region, and that the people here are now Russians. But his troops have left, and now they’re killing the civilians they once vowed to protect.

Amid acute power and water shortages, the people of Kherson are suffering and, with winter fast approaching, it’s only set to get worse.

Soon after the invasion of Ukraine began, Kherson was taken over by Russian forces, only emerging from months of occupation on November 11 when the Kremlin’s troops withdrew. Now residents are suffering the kind of violence familiar to so many across this country.

In a small grocery store also destroyed by the recent shelling, a desperate local man searches in the rubble for scraps of food and rolls of toilet paper, scavenging for what little he can to survive.

“Is everything so bad?” we ask. “It’s not good,” he responds, bleakly.

Russian billboards in Kherson are replaced with Ukrainian ones.

A man fills containers with water from the Dnipro River, with Russian-controlled territory just on the other side of the waterway.

The water supply to this city has been cut off by the Russian attack, so we watch an elderly woman on the street placing a bucket under a drain pipe to collect a feeble drip.

Others, like Tatiana, who preferred not to give her last name, take the hazardous walk to the bank of the Dnipro River on which this city lies.

Russian forces still control the opposite bank and the strategic river now marks the frontline with Russian forces just a few hundred meters away.

Tatiana fills two black plastic pails, then struggles back up the hill towards her home. “How we can live without water? We need (it) to wash, for the toilet, to wash dishes,” she says. “What can we do? We can’t live without water. So we come here.”

The boom of artillery exchanges between Russian and Ukrainian forces echoes in the background. This is not a place to dawdle.

Residents of Kherson charge their phones in a tent provided by the local administration.

Hanna, right, and her daughter Nastya sit together in the phone-charging tent.

Just two weeks ago the city’s central square was the scene of jubilation after Russia’s retreat, one of the biggest setbacks for Moscow in this war.

Now, tents set up by the local administration stand as monuments to the various hardships here. One is for getting warm, one is for charging phones, and one is to help those who have had enough, and want to leave altogether.

In the charging tent, people of all ages crowd around tables, sip tea, and plug into the power strips endlessly daisy-chained together. The air is thick with body heat and breath.

Hanna and her daughter Nastya sit on a cot. It was the girl’s ninth birthday the previous day, and she’s decked herself out with Ukrainian faceprint and a flag draped over her shoulders.

“It was very hard – we lived through the whole occupation,” says Hanna. “I can say we live much better now. No water, no power, but also no Russians. It’s nothing. We can get through it.”

After months of occupation, Nastya shares the defiance of the adults around her. “I think that our enemies will all die soon,” she says. “We will show them what you get if you occupy Ukraine.”

That defiance is also felt by those outside the city, who avoided occupation but lived at the frontline of the battle.

Valeriy, 51, and his wife Natalia, 50, hid in their potato cellar this spring when Russia shells landed on their dairy farm, ripping through their kitchen and destroying a tractor and car.

Their roots here are deep. “Our umbilical cords are buried here,” Natalia says, using a Ukrainian expression. But when the fighting grew too fierce, they abandoned their home and beloved cows to the war, returning recently after months in exile.

Valeriy shows a piece of the Russian shell that landed in his yard.

“What’s our life like? Super!” Natalia says with a laugh as she washes dishes with water warmed over a stove. “It’s very hard. But at least we’re at home.”

Valeriy holds up a large piece of metal shrapnel – all that’s left of the missile that landed in his yard.

“We lived peacefully and quietly,” he says. “We were working, earning money. Some growing crops, others had farm animals.”

To see what’s become of his village is “like a stone weighing on my soul,” he says.

“Everything we earned and built we did with our own hands. Now it’s very hard to come back and see what the Russian scum did to us. I don’t have another word for them.”

But he did return to one good surprise. His beloved cows – left wandering the fields for months – had survived.

“I gave them a hug!” he says, hugging them anew, with a broad smile. “I felt joy! They survived. I was so worried about them.”